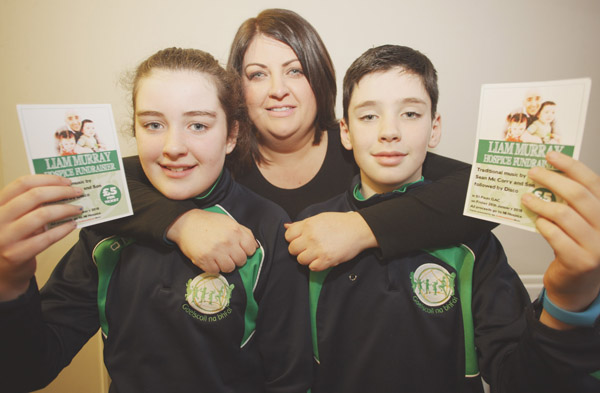 THE family of the much-admired St Paul’s stalwart Liam Murray will be celebrating his 40th birthday by holding a fundraiser in his memory.

Liam passed away at a young age on New Year’s Day 2010, sending shockwaves throughout the tightly-knit GAA community in Belfast and beyond. Liam’s wife Bernadette along with their twins Liam and Amy have organised a celebration of Liam’s life to be held in St Paul’s GAC on January 26. Proceeds from the night will be going to the Hospice, where Liam spent his final days.

Speaking to the Andersonstown News Bernadette said: “We couldn’t let Liam’s 40th go by without doing something to mark it, we decided that we wanted to have a wonderful night of music and celebration and we also wanted to raise funds for the Hospice. Liam spent his last three days there and they were so good to him and us as a family. We want to thank all the local businesses who have donated prizes for the night, people have been so generous. I put a post on Facebook a few weeks ago and the response has been overwhelming, I didn’t need to ask a single person for donations, everyone volunteered. I think that goes to show just how well Liam was thought of, everyone who ever met him always has a kind word to say about him.”

Discussing the importance of the Hospice Bernadette said: “We first got involved with the Hospice when Liam was given his terminal diagnosis. Liam wanted to stay at home for as long as possible, so the Hospice helped us to facilitate that. We tried to keep our home life as normal as possible for the kids’ sake, the community nurses came out every day and our Hospice nurse came out every week to assess Liam and to check that we were coping okay.”

Bernadette continued: “When Liam’s condition deteriorated we were offered a night-time Hospice nurse to stay with him while I slept, we only ended up using this service the once as Liam got very ill very quickly and had to be admitted to hospital.

“Liam was then admitted to the Hospice where he spent the last three days of his life. I can’t thank the Hospice enough for the help and support we received as a family, for allowing us to spend time together while they cared for Liam in a gentle and dignified way. It is a vital service for our community. I don’t know what we would have done without it.”

Tickets for the fundraiser are £5, available in St Paul’s or you can pay at the door on the night. Music will be provided by Seán Mac Corraidh and son and a disco will follow.

If you would like to make a donation to the Hospice in Liam’s memory you’er asked to go to: www.justgiving.com/fundraising/inmemoryofliamonhis40th