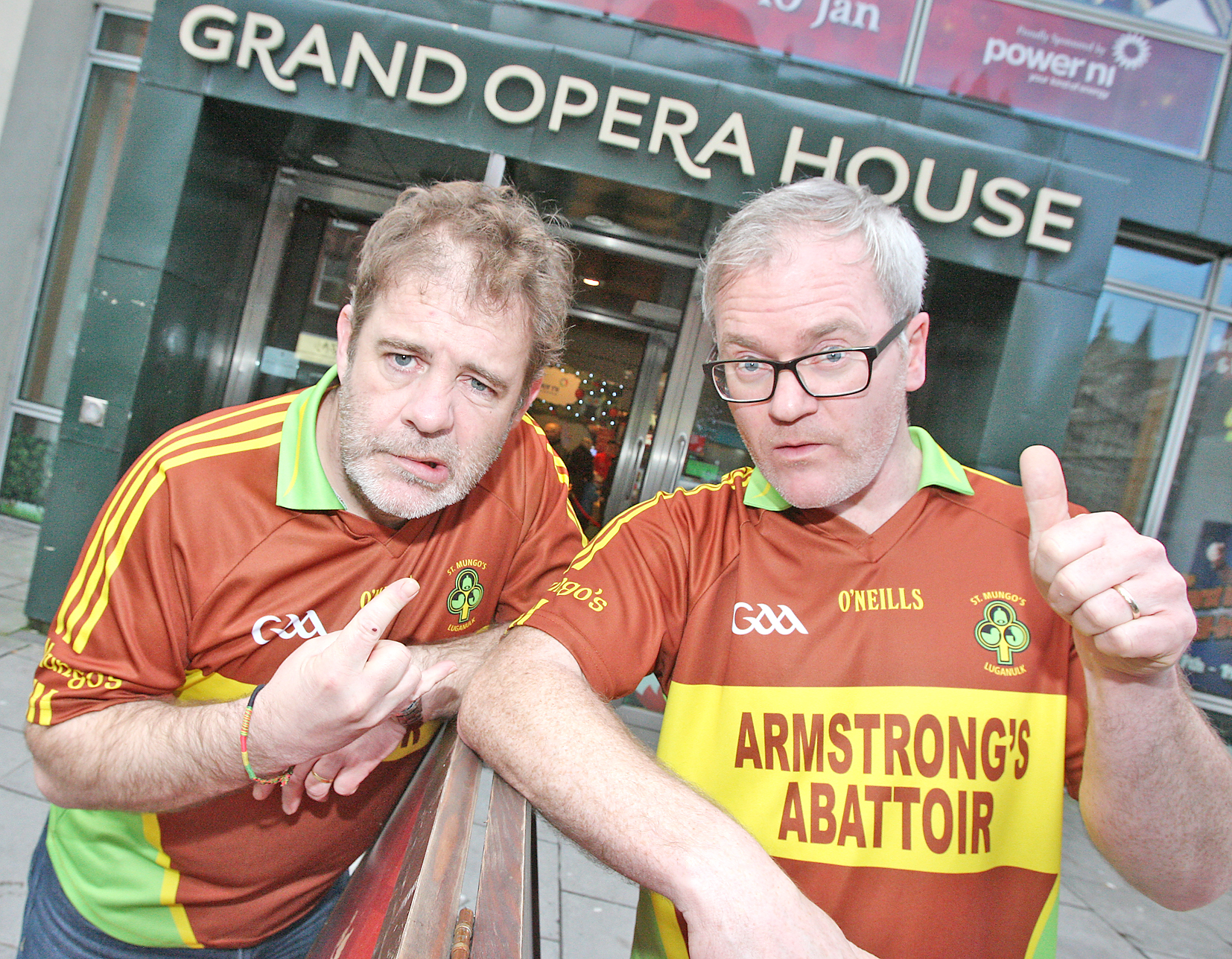 “YOU don’t need to know anything about Gaelic football to enjoy a show at Christmas that’s not a Christmas show,” laughs Alan McKee, one half of comedic duo Grimes and McKee, as he explains their latest show St Mungo’s Luganulk.

Sitting in their own specially designed GAA jerseys based on HB’s classic Loop the Loop ice lolly of lurid yellow’s and florescent greens, Alan and Conor tell the Andersonstown News how they wanted to write and perform a snapshot of how the good people from the fictitious town of Luganulk learn to love their football team again – which just happens to be the worst in Ireland.

Rooted to the bottom of Division Four, without a win in six and a half years, no-one is buying the weekly lotto draw tickets, nobody is attending the games and it’s proving elusive to say the least to find 15 able-bodied men to pull on a jersey.

“The story is about St Mungo’s – which is based on a real GAA club – but we can’t say for legal reasons,” explains Alan. “The story revolves around Barry Maguire, a native, who moves back from London and decided he’s going to do something about this terrible team so he’s going to drag them out of the doldrums and resurrect former players.”

The motley crew of players include the local parish priest and Cornelius who’s still recovering from a bad experience with a stage hypnotist.

Conor said that for anyone who may have a reservation about their lack of GAA knowledge they needn’t worry as the play is about a village, a wee community “that’s typical of anywhere in Ireland really”.

“The whole story came about when we were asked by a GAA team to create something, like a fundraiser, and we managed to sell out three nights with it. We performed the show last October and it just took off from there.

“There are about 24 GAA clubs in Belfast, we’ve done about 100 across the north and we performed up at Hannahstown’s Lámh Dhearg, so far it’s been the only club we’ve been up at in Belfast, we packed it out and it went down really well.

“Basically we’ve stuck it on at the Opera House – with May McFettridge’s permission of course – over three nights starting next Thursday until Saturday.”

Alan added: “We go on around 9.45pm so that gives people some time to hit the market for an Armadillo burger at the market.”

Conor said staging the play in the city centre is a great opportunity for GAA fans in Belfast to come along for a night’s craic.

“The show really has created its own energy, we do our last one on February 6 as we have to move on to our next project. Being in the Opera House gives the local clubs a chance to come down and see it for themselves.”