And then there was none 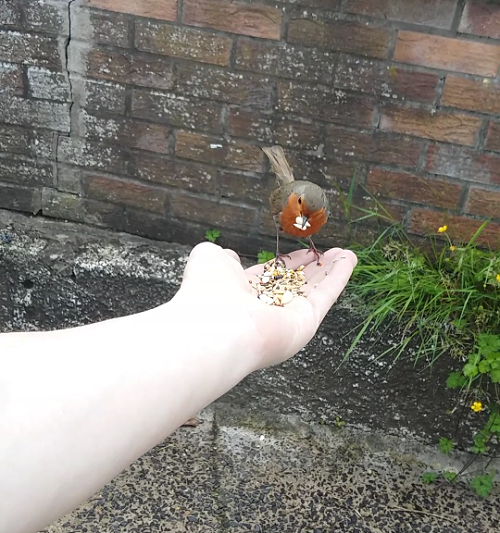 Dúlra’s garden is like the surface of the moon.

It’s an abandoned, windswept desert. Yesterday three feeders were packed full of scrumptious food, an irresistible seed mix was as usual scattered generously on the path and a couple of heels of bread thrown onto the lawn along with a few over-ripe apples for good measure.

But there wasn’t a single movement in the bushes, no excited calls – the avian equivalent of licking your lips – greeted Dúlra as he distributed the food and not a solitary bird ventured forth. Nada. Zilch. Faic.

It might sound hard to believe, but they’ve all been killed – butchered one after the other day after day like they were on a deadly production line. Their executioner was a sparrowhawk. The design of Dúlra’s garden gives the smaller birds no chance to escape when it strikes. The hawk probably can’t believe how easy it is – and how many small birds were feeding in this one garden. It sweeps down from the mountain and by the time it dips over the privet hedge, it’s within three feet of the hanging feeders. As the saying goes, it’s like shooting fish in a barrel.

When the flock of goldfinches arrived in September, Dúlra was delighted, and made sure their favourite sunflower heart feeders were always well stocked. Goldfinches are relatively tame and their incessant Japanese bell-like twittering is a fabulous addition to any home.

There were 15 of them, all splendid in their autumnal best with their red face masks and stunning yellow wings. By the time Dúlra noticed what was happening, five had already been taken. He found their bright feathers on the path, glued to the concrete by their congealed blood. Last week there were just three – and they didn’t even appear more nervous despite losing most of their friends and relatives.

It was as if they were in death row and had accepted their fate. For their final meal they had chosen sunflower hearts and they would leave this world happy. And leave it they did.

Today, it’s as if a rich carpet of feathers has been laid on Dúlra’s path. Along with the bright goldfinch colours, you can make out various tits’ feathers, chaffinch blue and dove grey.

Tragically, the robin which Dúlra spent a year building up a relationship with so that eventually it would feed out of his hand, is also gone. Like all the rest, Dúlra has inadvertently killed it with kindness by supplying so much food and thus delivering them to the sparrowhawk like a wrapped Christmas present.

The sparrowhawk, spioróg in Irish, arrives so fast that Dúlra just catches glimpses of it. These incredible birds usually kill one bird a day and a fat pigeon will last them a few days. But it seems the sparrowhawks successfully bred somewhere on the hills nearby – so the garden birds are being targeted by a whole family of hawks.

As the weather turns bad, Dúlra’s garden will inevitably get busy again as migrants arrive, and when they discover all the untouched food they’ll think it’s paradise. And for better or for worse, that's exactly where they'll be sent – by the sparrowhawks of the Belfast hills.