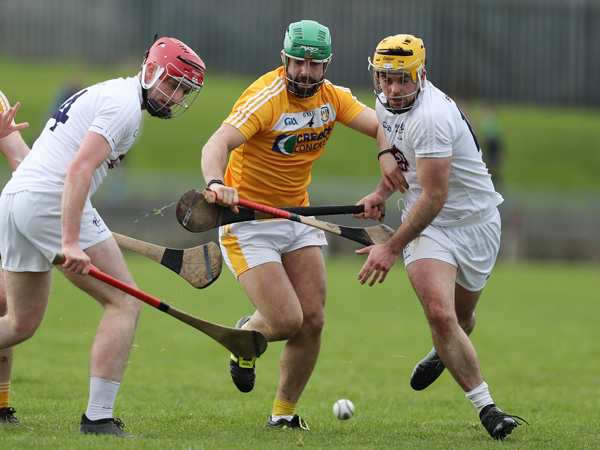 From David Mohan in Cushendall

ANTRIM’S hurlers maintained their promotion push from 2A of the National Hurling League thanks to a two-point win over Kildare at Cushendall yesterday.

The Saffrons didn’t have it all their own way however as they were pushed hard by the Lilywhites and it was a flurry of scores that eventually saw them pull clear going down the stretch although the visitors also rallied late and went close to finding a winning goal in stoppage time, but Antrim survived.

It certainly could have been a much more comfortable day for Antrim had they hit more than one goal and they had a number of chances to do just that, but a combination of poor finishing, some great goalkeeping and a missed second half penalty kept Kildare in the hunt.

Indeed, for long stretches there was little to separate the sides and they were level on no fewer than 10 occasions throughout.

The first half was certainly tit-for-tat with an early Antrim two point lead thanks to scores from Paddy Burke and Ciaran Clarke the biggest gap as Kildare drew level and turned the game into something of a dogfight. The hosts were also dealt a blow on three minutes with Paul Shiels forced off with a hand injury.

David Reidy hit five frees with former Kilkenny player, John Mulhall getting in on the act while Conor Johnston was on form at the other end. Reidy was having a huge influence but it was his temporary replacement towards the end of the half, Jack Sheridan who was to have the final say of the opening half with a point to leave Kildare 0-8 to 0-7 ahead at the break.

Antrim wasted no time in getting back on terms after the interval with Eoghan Campbell pointing and a minute later, they were awarded a penalty when Neal McAuley was taken down when going after Clarke's low free that had been batted down. Up stepped Clarke, but the Ballycastle man sent his low shot wide left.

He would make amends on 46 minutes however when firing to the net after taking a pass from McAuley to help Antrim into a 1-10 to 0-10 lead.

Kildare kept battling with Limerick native, Reidy continuing to raise flags and the visitors tied the game at 1-12 on 57 minutes when Brian Byrne jinked inside and sent an unstoppable shot into the net.

Antrim held their composure however and they finished strong with Clarke (two), Conor Johnston and Daniel McKernan pointing. Kildare did reduce the arrears to two with Reidy and his brother, Michael pointing, but their late assault on the Antrim goal didn't produce the goal they needed as Jack Sheridan's shot at goal was deflected away to safety as Antrim held on for a vital win.

Meanwhile, Antrim’s footballers came up just short in Drogheda as they lost out to table-toppers, Louth 2-10 to 1-11 in their National Football League Division Three game.

Eoin O’Connor’s goal had the hosts in control after 11 minutes but they’d only take in a 1-3 to 1-1 lead at the break after Ryan Murray sent a deflected shot into the Wee County’s net.

The Saffrons looked like potentially causing an upset during the early stages of the second-half, but a Ryan Burns penalty on 56 minutes ensured that Louth took the points.