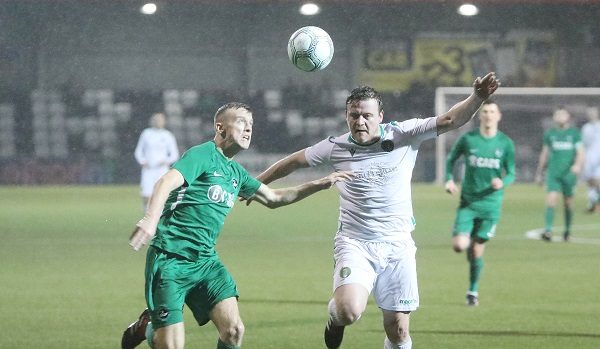 BELFAST Celtic chairman Jim Gillen has questioned the wisdom of rushing players back to competitive football with the Irish Football Association set to make a call on the Intermediate Cup semi-finals this week.

It is understood the IFA want the games played before the end of the month or else the competition be the voided for this season.

Belfast Celtic are set to renew rivalries with Newington in one semi-final while St Jame’s Swifts take on Dollingstown in the other last four clash.

Earlier in the season, Newington defeated Belfast Celtic following a penalty shoot-out in their Steel and Sons Cup semi-final at Seaview before Conor Crossan’s side lost out to Linfield Swifts in the Christmas Day decider at the same venue.

The IFA recently confirmed details for an historic Irish Cup semi-final double-header at Windsor Park with Ballymena taking on Coleraine at 4pm on Monday, July 27 with the second semi-final between Cliftonville and Glentoran kicking-off at 8pm. The final is scheduled for Friday, July 31.

Gillen believes a similar schedule could be put in place for the Intermediate Cup, but queried why the IFA appear to have set a cut-off point for the competition.

“They (the IFA) are due to make a decision on it this week. They hope to do it in the same way as the Irish Cup and have it done and dusted by the end of the month,” stated Gillen.

“When you take into account that teams haven’t trained collectively from March and they won’t allow friendlies until July 17, so you are coming out of a three and-a-half month shutdown and they expect us to go straight into an Intermediate Cup semi-final?

“The reason for them rushing the Intermediate Cup semi-final is beyond everyone – nobody can understand it.

“The Irish Cup is different – there’s a European place at stake. There’s nothing like that with the Intermediate Cup. They could play it pre-season.

“We are now hearing that if they can’t get it played off by the end of July, the competition will be scrapped.

He added: “Our boys returned to training on Tuesday night. Maybe some teams didn’t stop training, but we certainly followed the rules.

“If they tell us to play it at the end of the month, we’ll play it and we’ll give it our best shot.

“I thought they would have made a decision on this before now. Once they announced details of the Irish Cup semi-finals, I waited a few days and was expecting some confirmation about the Intermediate Cup, but nothing at all.

“It is a crazy situation and you feel for the players, but we’ll just have to get on with it and deal with whatever comes up. We’ll play it whenever and wherever.

“The are playing the Irish Cup semi-finals as a double-header at the same ground (Windsor Park) – one at 4pm and one at 8pm with the final four days later.

“They could do the same with the Intermediate Cup. Play the whole lot at Seaview or Solitude.

“They have plenty of options, but the IFA have told us very little up to this point.”

Belfast Celtic are understandably keen to see the Intermediate Cup completed after a few near misses this season.

They also reached the fifth round of the Irish Cup before losing to Larne while they were denied the chance of challenging for the Ballymena and Provincial Intermediate League title.

Dunloy FC were awarded the title at the expense of both Belfast Celtic and St James’ Swifts with the league opting to end the end with positions decided on a points per game average.

The North Belfast men were 21 points clear at the top, yet both West Belfast clubs had a number of games in hands. The Swifts were confirmed as runners-up in the final standing with Belfast Celtic taking third.

Off the field, the club announced a new partnership with Scottish Premiership champions Celtic in a move which will see the local club benefit from the coaching expertise of one of European football’s most revered clubs.

The alliance will see the Celtic Soccer Academy share coaching methodology, curriculum and deliver training camps with coaches and players from Belfast Celtic.

The West Belfast club will also have the opportunity to send coaches to the annual International Coaches Convention held by Celtic to get a behind the scenes insight into the Celtic Academy system and its approach to developing players so that they can fulfil their potential.

Gillen also feels that their first team squad will remain largely unchanged for next season, although he didn’t rule out trying to coax Matthew Fitzpatrick back to Glen Road Height at some point in the future.

“We’d love to have him (Fitzpatrick) back at the club at some point,” added Gillen.

“We will have to wait and see how things work out for him, but he would be a great addition to the squad.

“I think we are alright player-wise. It is just a matter of bringing them up to speed. Paddy (Kelly) and Mackers (Stephen McAlorum) have their plans in place.

“I’d say we will have an identical panel going into next season. I don’t think there is anybody who is leaving the club.”