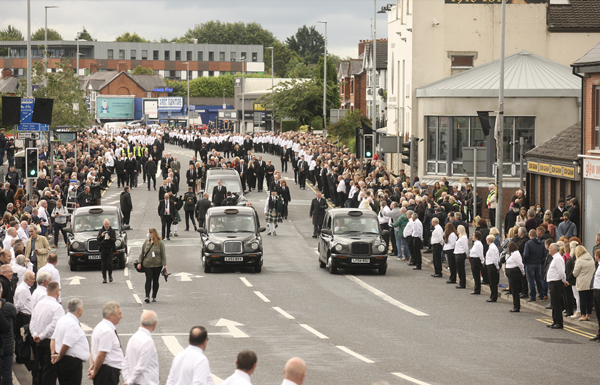 Belfast City Council has voted in favour of an independent investigation into events at Roselawn Cemetery on the day republican veteran Bobby Storey was cremated.

At a special sitting of the Council this afternoon 36 councillors voted in favour, with Sinn Féin and People Before Profit abstaining.

The Council has been embroiled in controversy since the June 30 funeral when it was revealed that eight other families did not have the same access as Mr Storey’s family who were able to gather outside the crematorium.

SDLP group leader on Belfast City Council, Dónal Lyons, said: “Ultimately councillors are the final authority on issues within the Council’s remit and so should carry the final responsibility. The investigation, to be considered comprehensive, must include any actions by councillors which may have led to the perception of preferential treatment being sought or any other improper motivation. Narrowly focusing on just one part of the issue, important as it is, will only result in broader questions being left unanswered."

The motion calling for an independent investigation has been passed, with Alliance support, into the events at Roselawn. Everyone except SF & PBP backed it.

Earlier in the day a Belfast City Council report into events at Roselawn Crematorium found that fewer than 30 mourners attended.

There had been claims that up to 60 people attended Roselawn and that republicans took control of the cemetery.

It also said that there were no paramilitary trappings.

The six-page leaked report said: “There is nothing in the CCTV footage that provides any evidence that Roselawn was under control of persons other than council officials.”

The report also states that 28 mourners were outside the crematorium, seven people were appointed by the family as stewards and 12 vehicles followed the hearse.

The report accepts that not allowing eight other families the same access to Roselawn as the Storey family was wrong.

Meanwhile, a senior official at Belfast City Council has been warned by police of a death threat against him.

Appalled that any threat to life or threat of violence would be issued against Belfast City Council staff. I hope those responsible for the threat against Nigel Grimshaw are identified and successfully prosecuted.

"This threat comes after Nigel Grimshaw has been the subject of much inaccurate, ill-informed and irresponsible public commentary in recent days," said the party's group leader on the Council.

"Everyone should be free to go about their business free from fear of threats and intimidation.

“Anyone with any information on those responsible for this despicable and cowardly threat should bring it to the PSNI.”