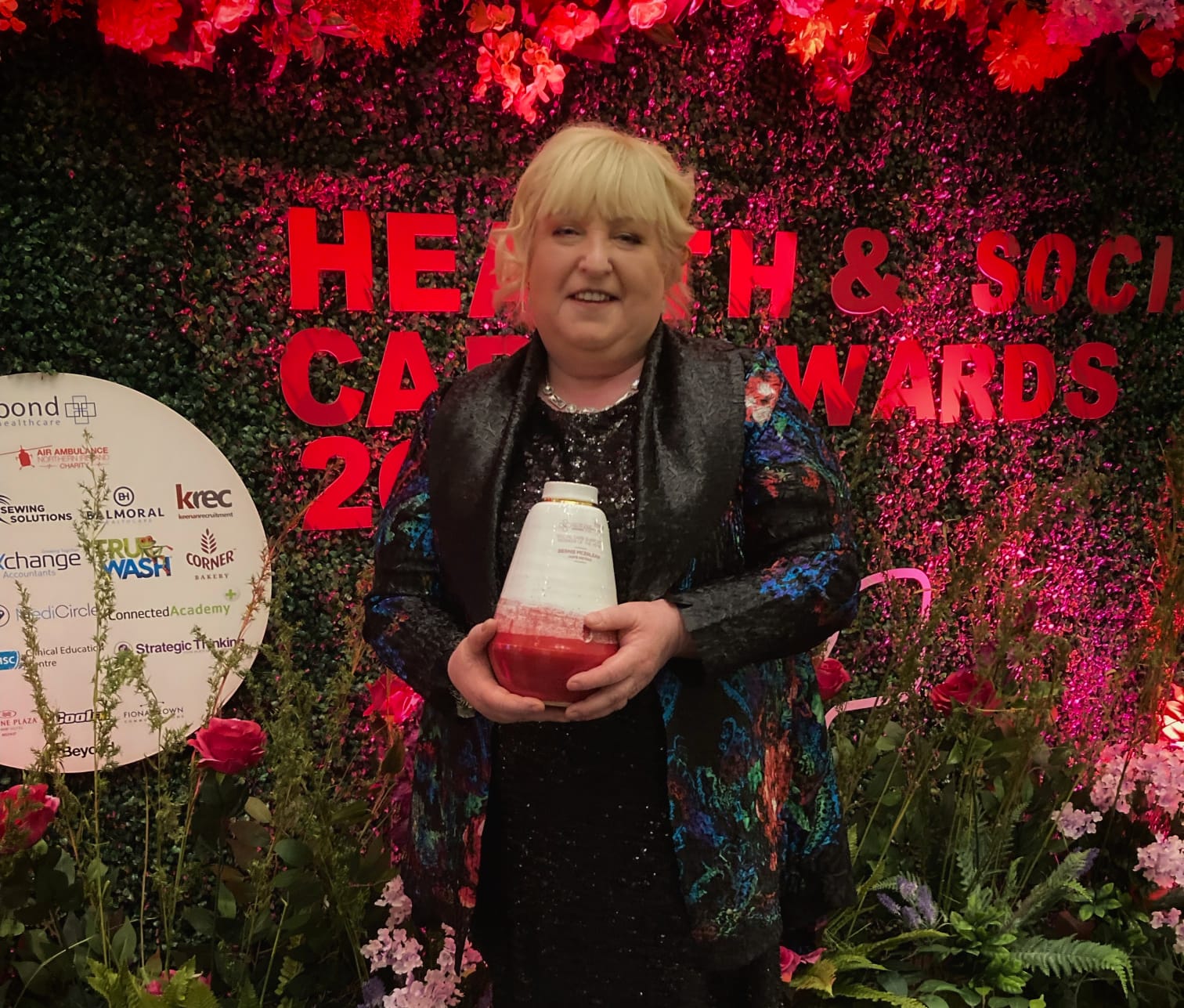 LENADOON woman, Bernie McErlean has been crowned Social Care Support Worker of the Year at the Northern Ireland Health and Social Care Awards at a glitzy award ceremony at the Crowne Plaza, Shaws Bridge.

Bernie, who previously worked in Curley’s and then worked as a manager in the Sainsbury’s filling station, took voluntary redundancy at the age of 60. Having always wanted to work as a nurse, Bernie didn’t take retirement easy and decided to apply for a job as a carer with Home Instead.

She was recognised for the amazing support she provides daily to her elderly clients, helping them to remain living comfortably in their own homes.

Bernie continued to provide companionship virtually to some clients when she couldn’t work during the initial lockdown, and has also provided much needed comfort to her clients receiving end-of-life care.

Speaking to the Andersonstown News after winning the award, Bernie said she couldn’t believe it.

“I was very overwhelmed but now I am delighted that a wee woman from Lenadoon Avenue won such an award,” she said.

Bernie had previously been nominated for the Home Instead awards and had got down to the final eight in her category. Her employers felt that she deserved even more recognition and nominated her for this award without her knowing.

Detailing how she found out about being nominated, Bernie said: “I had a phone call from my son who is a social worker. He asked if I had been nominated for another award and I said not that I know of.

“The next morning I asked Lynn if she had nominated me and she told me she had.”

Congratulations to the Winner of the Social Care Support Worker Of The Year Award - Bernie McErlean, Home Instead and Highly Commended Deborah Boyd, Praxis Care pic.twitter.com/lzo2UbZx8g

Bernie said that when it comes to her clients, she sees them as friends.

“I have lots and lots of friends. When I left Sainsbury’s I thought there was no work for me and I would never work again. I was on the retirement scrapheap and when I applied for Home Instead and got the job I was delighted.

“When I started to visit people, I could take them all home with me. I wish I had done it years ago because it is such a rewarding job.

“Most of my clients have dementia, my father passed away five years ago and he had dementia so I had experience of it.

“My late husband Eddie also died and I had nursed him. I always wanted to be a nurse but circumstances meant that it didn’t work out.

“You have to get into the clients way of thinking and feeling. Some of them like you to talk to them, some want you to sit and hold their hand, others want you to make them a wee drop of tea.

“I love them to get the best of their last few years or whatever they have left. Dementia is dementia, but inside there, they are still people.”

Lynn Elliott, owner of the Home Instead office where Bernie works, commented on Bernie’s accolade.

“Bernie, our very own Belfast superhero, is an exceptional Care Professional who always goes above and beyond to support her clients within their own homes. We are so proud of everything she has achieved over the last three years.

“The Northern Ireland Health and Social Awards ceremony was a truly fantastic evening. We are in a sector that can sadly be forgotten about, so it was so brilliant to see all manner of health and social care professionals at the same table, the way it should be – the Doctor and Nurse of The Year side by side with our Bernie.”

To find out more about Home Instead and their home care services, or if you are interested in a caring role, please call 028 9560 9910