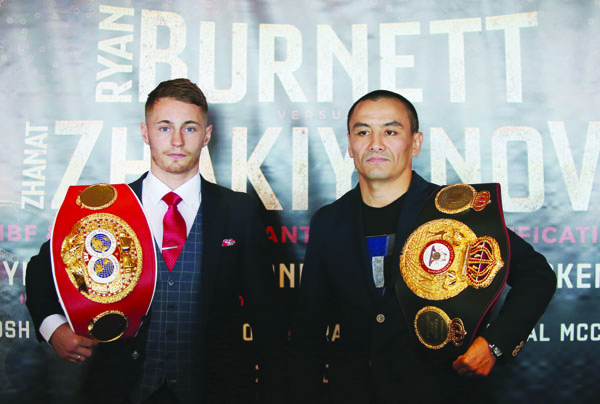 Ryan Burnett and Zhanat Zhakiyanov meet for the IBF and WBA bantamweight titles at the SSE Arena on October 21 Picture by Jonathan Porter/PressEye.com

BUILDING a legacy and being known a great world champion is the motivation for Ryan Burnett who looks to unify the bantamweight division in what is the first defence of his IBF title against another man making a maiden defence, WBA king Zhanat Zhakiyanov on October 21 at the SSE Arena.

The pair came face-to-face at a press conference at the Europa Hotel yesterday (Wednesday) and there was a noticeable difference to Burnett whose title success back in June seems to have given him a greater confidence at these gatherings as his star has risen considerably in his home town.

He even cheekily fired back at his promoter, Eddie Hearn who pointed out the North Belfast man was in a suit and not a tracksuit on this occasion, saying: “That’s because you’re paying for it.”

That brought laughs from the large crowd that had gathered for this press call, both on the top table and on the floor as the number of fans and reporters was quite significantly greater than the press conference to announce the Lee Haskins bout. It was a sign of how Burnett had matured and grown in confidence since claiming the title although that win is just the beginning of the journey he insists and not something to rest on.

“This is a big fight, the fight of the division,” said the 25 year-old.

The WBA super champion from Kazakhstan won his title over Rau’shee Warren back in February and presents a difficult assignment.

The 33 year-old’s English isn’t exactly perfect, but he did make the point that he intends to claim both belts on October 21.

“I am happy to get this chance,” said the Manchester-based Kazakh.

“This is a big fight with two belts on the line. I will be ready on October 21.”

Zhakiyanov is trained by Ricky Hatton, who was of course Burnett’s past trainer and the pair sparred back when the North Belfast man first turned over to the pro’s.

Hatton was unable to make it to Belfast yesterday, but his right-hand man, Mike Jackson was in attendance and dismissed notions those past spars will have any bearing on what transpires in October, although he was full of praise for the Newington man he knows well from their time together.

“I don’t think it’s a factor as that was a long time ago. Both have improved,” he opined.

“He didn’t have to take this fight, so all the respect in the world to Ryan for doing it in his home town. It will be an occasion, but this man (Zhakiyanov) is tough, so we are expecting fireworks.”

Promoter, Eddie Hearn is also expecting a massive occasion and is hopeful the SSE Arena will be jammed to capacity come first bell.

Burnett’s victory over Haskins was played out in front of around 4,500 fans and Hearn was happy with that given the Belfast man hadn’t really been built fully in his home town, but is confident that is no longer the case.

“If we can’t sell this, then I may as well give up,” said the Matchroom boss.

“I think it should sell out. What more do you want?

“The bill is shaping up nicely with some good solid undercard fights and another couple to add as well. We are hopeful we can sell it out or go deep.

“I was pleased the last time as there was a good atmosphere, four or four and a half thousand.”

The undercard boxers were also in attendance yesterday with some excellent match-ups confirmed including Paul Hyland Jnr v Stephen Ormond, Tyrone McKenna v Tommy Coyle and James Tennyson v Darren Traynor. Feargal McCrory will box on the card, while new MTK signing, Tommy McCarthy is also expected to be added. While this undercard will help put bums on seats, Hearn believes Burnett’s newly-acquired star power will draws in the fans regardless for what an historic occasion for boxing in the city.

“I’m not going to say I wasn’t sure if he (Burnett) could be a star, but he just needed something,” noted Hearn.

“Now I see it. He’s lively, he’s funny, butts in when I’m talking at the press conference, sharp-witted. He’s got the belief now, he sees murals of himself, he’s a superstar.

“He’s 26 and really, really good. He’s a world champion, he’s trying to unify. He could win all the belts, move up and do it all again he’s that good. You’re going to see him getting better and better.

“He’s very precise in what he does, very calculated. That’s why he and Adam (Booth, trainer) have taken this fight because the feel they can beat him.

“I believe he is the real deal and a big star, but he’s only half-way through to proving that. On October 21 you will see the real deal in Ryan Burnett.”

Burnett knows he will need to be at his best against a danger man like Zhakiyanov who will not be travelling to the city to play the gallant loser.

The IBF champion has never had things easy in his career and he maintains he is determined not to take the softer option, hence his decision to unify instead of making a couple of routine defences.

His title win over Haskins only served to double his appetite for success and he is confident he can join fellow North Belfast man, Carl Frampton in becoming a unified champion.

“Same as the last fight which was very serious. I stood and looked at that IBF title and said it was going to be mine. Now that I have got it, I honestly wasn’t satisfied and realised very quickly that I wanted more.

“I said to Adam that ‘I’m happy, but I want more’. The opportunity where we could defend the title or go for something bigger. Without a shadow of a doubt, I’m going for the bigger.”