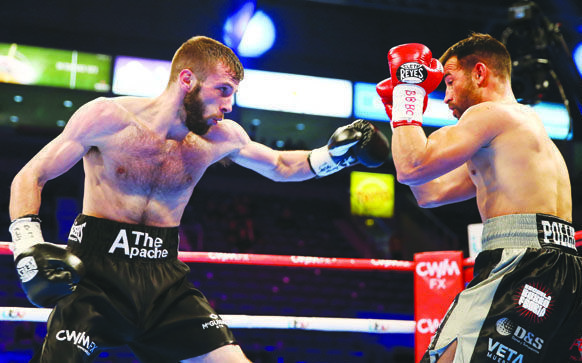 ANTHONY Cacace will make the first defence of his British super-featherweight title against Leon Woodstock as part of Frank Warren's summer series that will take place behind closed doors at the BT Sport studio.

Whilst no date is confirmed for 'The Apache', it is expected the Belfast man will return to action in August against the Londoner in what will be his first appearance since claiming the title with an impressive points win over Sam Bowen in November.

26-year-old Woodstock will enter the ring with a 12-2 record having lost two of his last three fights. The Londoner was defeated by WBO number three Archie Sharp on points in 2018 and following a comeback win over Sergio Gonzalez, came up short against Zelfa Barret for the Commonwealth title so will be hoping to make it third time lucky in title fights against Cacace.

However, the West Belfast man is coming off that breakout win over Bowen that has finally opened some doors for him following a frustrating period when he couldn't secure meaningful action without something to bring to the table.

That is no longer the case and while a meeting with Woodstock isn't exactly a guaranteed win, the former Oliver Plunkett amateur should have far too much in his locker.

The hope would be to bank another impressive win in this voluntary defence of the Lonsdale Belt before moving on and potentially setting up a world title eliminator against Sharp later in the year.

The fight will form part of Warren's Queensbury Promotions' return to action that will begin on July 10 with Brad Foster defending his British and Commonwealth super-bantamweight titles against the unbeaten James Beech.

It is also expected that Carl Frampton and Michael Conlan will appear on cards from the BT Sport studio in the near future with Irish boxers beginning to return to action across a number of promotions.

“I am thrilled to inform the fans that the wait for live boxing to return is coming to an end,” said promoter Warren.

“It has been a long haul and a trying time for everyone but we can now see the first flicker of light at the end of the tunnel.

“I am so excited to get going again after a period of unprecedented planning and detail to get to where we are. Unfortunately, boxing without fans at the venue is the new, but I am sure temporary, normal and we have made it our business to bring the sport back at the earliest opportunity in line with government guidelines regarding health and safety protocols.

“Our opening show on July 10 is just for starters and we will be looking to go bigger and better as we move along in our summer season that will see us deliver at least five TV shows.

“Across these dates, it is our intention to showcase highly competitive fights between hungry young domestic fighters and increase the stakes from show to show. No easy fights, just British boxing as it should be.

“I am also looking forward to seeing our unparalleled crop of brilliant young fighters step up the risk levels and really make the most of what will be huge exposure for them across the BT Sport platforms.”

Elsewhere, both Paddy Gallagher and Lewis Crocker are in a battle to win the race to face Conor Benn on a Matchroom Fight Camp card, with Eddie Hearn's promotional outfit also expected to make its return in the near future.

Benn - son of the legendary Nigel - hasn't quite hit the heights of his father despite building a 16-0 record with the WBA Continental welterweight title in his possession, but both Belfast men would fancy their chances against the 23-year-old.

There is also the option of taking on British and Commonwealth title holder Chris Jenkins and this would also be a fight that would greatly interest Gallagher who hotly disputes his reverse against the Welshman at the Falls Park last summer.

Sean McComb is another who is waiting for the green light for his step up against Craig Evans that is expected to top an MTK Global fight night card with late July or early August anticipated for the meeting between 'The Public Nuisance' and Evans, who lost out to James Tennyson back in November.

Confirmation for all local fighters is expected imminently as boxing on this side of the Atlantic makes its long-awaited return after four months.