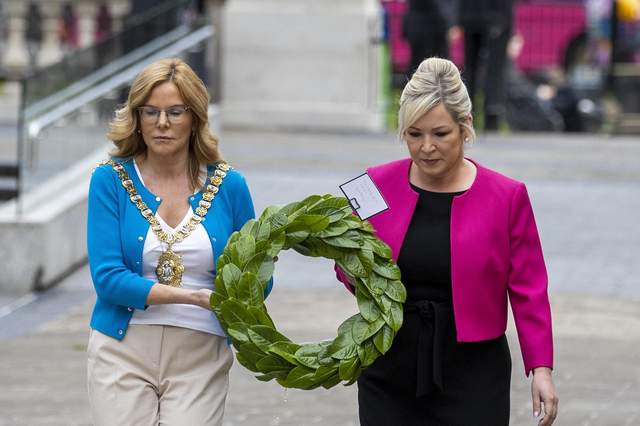 THERE are times when the DUP take my breath away. Last week, the First Minister-in-waiting, Michelle O’Neill, placed a wreath at Belfast City Hall Cenotaph. (No, Virginia, we don’t want to know what you thought of that.)

But the DUP in the person of Gavin Robinson didn’t need much time to think about it.

He was on the air with the speed of a rodent up a drain-pipe. It was good that Michelle O’Neill had done what she had, he opined, but it was a failure that she wasn’t whole-hearted about it. This was shown in her refusal to attend the ceremonies that followed her wreath-laying which honoured these brave men who gave their lives for all of us.

Let’s briefly step aside from the main issue and nail this absurd idea that those who were slaughtered at the Somme gave their lives for all of us. One listen to ‘The Green Fields of France’ should be enough for even Gavin Robinson’s brain to get the message: The massive bloodshed of the Somme and other battles from World War One were simply the clash of two empires, and regardless of who won, their legacy was countless tombstones and aching hearts.

But back to last week. Can you think of anything more calculated to inhibit further cross-community gestures by Michelle O’Neill than Gavin Robinson’s response?

“I don’t want to be churlish about it” Robinson said, and then went on to churlishly remark that it’d be nice to see “some collectivity in that commemoration”.

It’s that same old sour-faced contempt for a republican leader who offers the hand of friendship. You’re offering your hand? Huh? How come you aren’t prepared to give a hug?  How Shinnery  – half-hearted respect for unionism and the history of the British Army.

Dealing with that sort of sniffy response  requires the patience of a saint. When Martin McGuinness met and shook hands with Queen Elizabeth, not one unionist politician, in public or in private, commended him for the massive gesture of goodwill he had made. You can see why some nationalists and republicans might say: “Okay, you want to play it like that? Fine, churlish is a game two can play.”  But mercifully, republican politicians continue to be the adults in the room.

Which brings us neatly to the DUP’s demands that the British Government smash the Protocol.  In this they are at  one with the European Research Group (ERG) and the right-wing forces of the Tory Party. It’s becoming increasingly clear that the ERG and the DUP were meant for each other – they both believe they can get Boris Johnson and the British Government to dance to their tune, and so far it seems to be working.

Only, as Dame Arlene Foster once declared” “Be careful what you wish for.”  Thanks to the Protocol, the city of London and NEI are the two areas of the UK which are doing well. Get rid of the Protocol and it’s reasonable to anticipate a trade war between the UK and the EU.  You thought the cost of living crisis was tough going right now? You ain’t seen nothing yet. But despite all this, I remain an optimist. I don’t think Boris Johnson, for all his faults, is a fool.  He knows that the Protocol was the best deal he could do, and he’ll find a way to resolve the Protocol problem so that a few minor concessions look like a stonking victory.  And the DUP will thump its chest and boast of the power it has in all things UK.

So there’ll be no trade war but the DUP will be allowed to save face. That is, for another year and a bit. Because on October 19, 2023,  the Scottish people will give their verdict on independence, and if the DUP thought the present state was bad, wait until they see the Scots up anchor from the UK hysteria and steer into more sane EU waters.