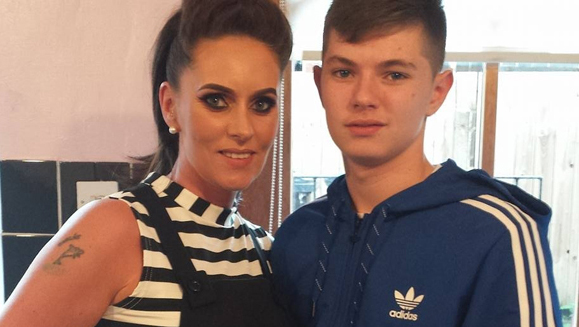 THE Oldpark community in North Belfast has railed around a 16-year-old boy following the death of his mother by raising almost £2,700.

Last week, the North Belfast News broke the news of the death of the popular and well-loved mother, Donna O’Halloran following an illness.

The 36-year-old suffered an aneurysm which led to a stroke after being rushed to hospital on August 3. She died nine days later.

The JustGiving page was set up by some of Donna’s former classmates of St Gemma’s High School, with Sinead Brown co-ordinating the fundraising effort for Donna’s son.

“I met Donna on the first day of our first year at St Gemma’s. She was funny, loud and the life and soul of any gathering. She was always laughing, smiling and giggling and was just a typical teenager,” explained Sinead.

“The JustGiving page came about after I lost my sister, Claire in April 2015 and she left behind a 17-year-old son and an 11-year-old.

“After feeling helpless after losing Claire, I knew I had to do something to help young Caolán because I know how hard it can be and expensive it can be to educate yourself or anything like that after a loss of a single parent.

“We decided to try and help, we set a limit of £500 and it was met within hours, the total has been raised at least 6 times and each time it is met.

“The response has been overwhelming, we have had donations from the locals and from as far wide as California. I am amazed and astonished at how generous the people of North Belfast and beyond are.

“I would like to start a charity who will help with young people after the loss of a parent, in single parent family's, as a tribute to both my Sister Claire and Donna- that is my goal, ambition and life’s purpose,” she added.

Donna’s organs were donated and have helped saved peoples lives, including eight people whose sight was saved because of her eyes.

"I was really saddened to hear of the death of Donna and it sent a shockwave across North Belfast,” he said.

“The way the community and her old school friends have rallied together has been totally amazing and it just shows you that although in North Belfast we often hear negative stories, this tragic story shows the real meaning of community.

"Young Caolan, of course, is going through a tough time and having support from the community is very important, to show people do care and will be there to help him."