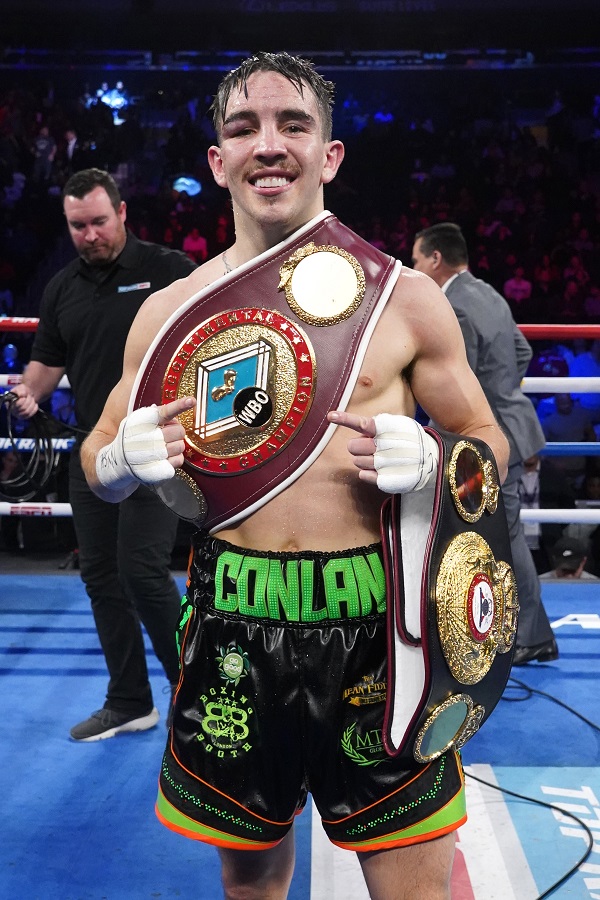 MICHAEL Conlan exorcised the ghosts of Olympics past as he slammed the door shut on the saga with Vladimir Nikitin at Madison Square Garden on Saturday night.

There was no controversy this time as Conlan out-boxed and at times out-fought the Russian over the 10 rounds to ensure there could be no argument over this result.

He did have to dig deep in stages and a nasty cut over his right eye that required stitches was a souvenir of his evening's work, but he left Nikitin with his own scars of battle to cement this victory in what was a highly-satisfying night.

"That's it now - it's done," he said after settling the score on the man who controversially got the nod against him at the 2016 Olympics.

"There was a load of pressure tonight, but I'm glad it's done.

"What happened before (at the 2016 Olympics) didn't matter; what did matter was that I've done the (10-round) distance before and you could see he was blowing a bit more.

"He boxed a lot more than I thought he would, but it was comfortable for me. There are gears to go through, but this is all about progression."

Conlan boxed for the majority of the fight as a southpaw and after a quiet opener, this fight came to life in the second although Nikitin was a little more conservative with his attacks - picking his moments to attack and usually left these until late in the rounds to try and sway the judges. Conlan began to time his lefts well, but the right jab was making a dent in his opponent whose left eye began to swell.

Nikitin did enough to earn the third, but Conlan was now into his groove as he threw spiteful counter lefts to keep his foe at bay and was beginning to pull away on the cards by the mid-rounds.

The seventh saw Conlan maybe take a round off as Nikitin earned another on workrate, but the eighth saw the Belfast man put a huge dent in those ambitions as he landed some big shots and almost seemed on the verge of a stoppage.

Conlan pushed on in the later rounds, landing the better blows and after an embrace at the start of the final round he got back to work, commanding the centre of the ring and finding the target with his lefts.

There was no doubting who was the better of the pair as we waited for the decision, but unlike Rio, there was no controversy.

Conlan got the decision and rightly so to close out the year, the decade and and chapter on the Vladimir Nikitin story.

"I don't want to talk about this anymore," he said of the whole story.

"People can talk about it of they want, but the two fingers are now two thumbs up. Maybe the Olympics might invite me although I'll box on August 1. I'd love to go to Tokyo but all that's in the past. 2016 will never change so we'll move on.

"Vladimir Nikitin is a good guy and I've always said that.

"I had to get mean with him, but I said to him after there's no bad blood between us and never has been.

"In the ring after he said to me 'good tactics'. I like the guy and I've always liked him. Even in the amateurs he was always a bit like me. He's a nice dude, but thank God this is put to bed and this monkey is off my back so we can move on."