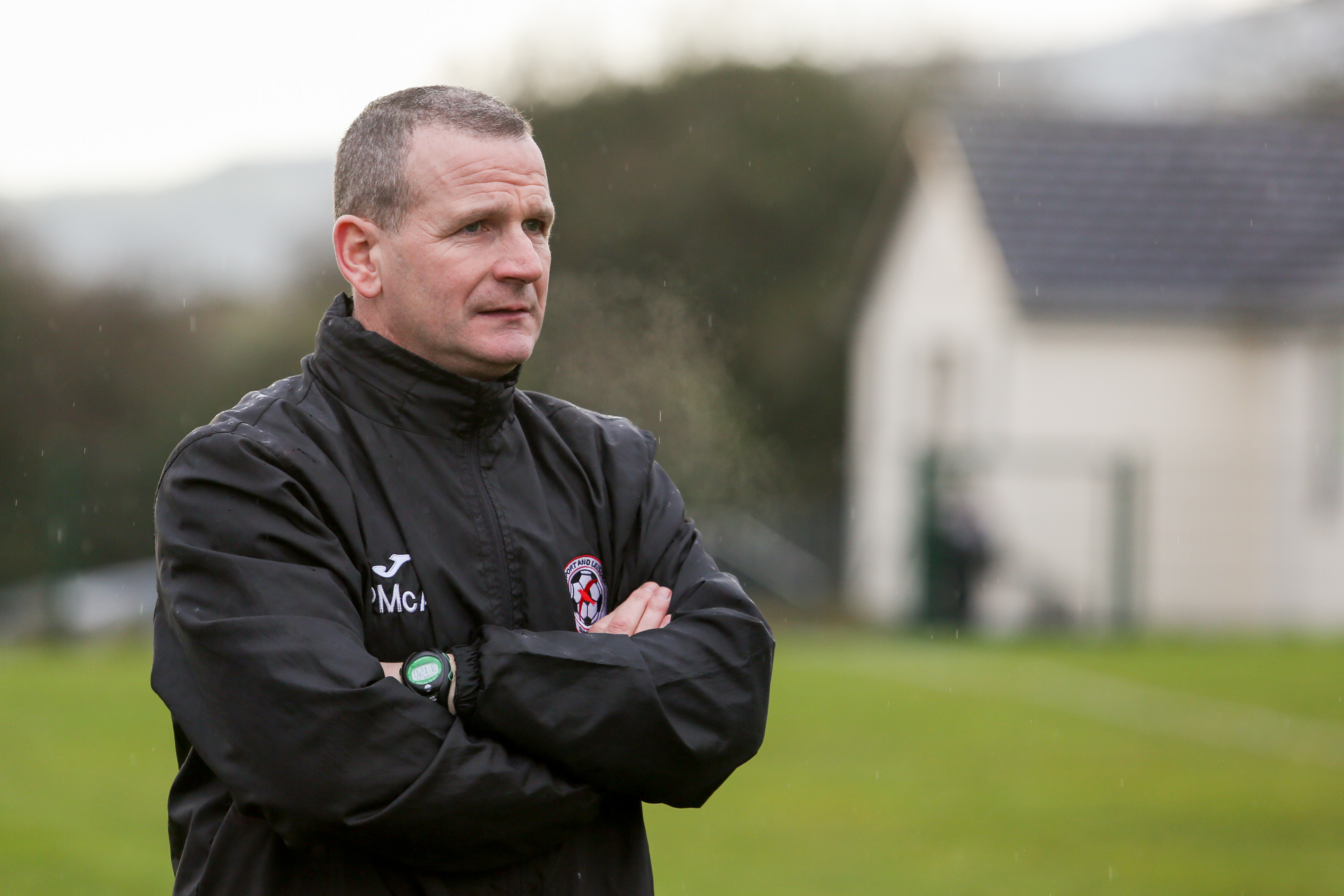 SPORT and Leisure Swifts and Donegal Celtic may be neighbouring clubs, but the gap between the sides in the Premier Intermediate table couldn’t be greater.

Ahead of this Saturday’s league clash at Glen Road Heights (2pm), DC top the standings after an impressive run of form in the opening half of the season. Sport and Leisure, in stark contrast, are bottom but have played four games less than their West Belfast rivals.

Packie McAllister’s side secured their first win of the season when they claimed a 2-1 victory over Bangor and the Sport and Leisure boss is keen to build on that performance when he faces his former club this weekend.

“It is a massive game,” said McAllister. “We will be trying to build on last Saturday’s win. “To be honest, the pressure and nervousness had been building throughout the club because we hadn’t gained our first league win of the season.

“It wasn’t through a lack of effort – we have had a lot of bad injuries. We have struggled even to field a strong enough bench and we have travelled with two or three subs at times.”

He added: “They (DC) are flying and are at the top of the league, but if we show the same effort and determination we showed last Saturday, then we will do alright. “Stephen Hatfield (Donegal Celtic manager) said earlier in the season that he had no interest in cup competitions and fair play to him for saying it – the league is their priority.

“We wanted to go as far as we could in the cups and we are really disappointed not to. “I haven’t managed to see DC yet this season, but I have heard they are very strong. “I would say, even though they are top and we are bottom, we are confident of getting a result against them. We don’t fear them by any means.”

Last Saturday’s victory ended a run of five defeats and two draws for the Glen Road Heights outfit. Having lost out to Bangor 4-1 in September, the result was even sweeter for McAllister who felt the Seasiders underestimated his side.

“There has been a lot of nonsense talked too,” said McAllister. “People have been saying it was a shock result to beat Bangor. As boring as it may sound, in this league every single team is capable of beating another team. “I knew after a few games of the season that would be the case.

“I honestly do feel that Bangor underestimated us. “They beat us 4-1 down there earlier in the season, but it was 2-1 with five or six minutes to go and they scored two late goals.

“We were worthy winners but it is the usual nonsense you have to listen to – clubs come up and blame the pitch. At the end of the day, we wanted to win more than they did and that’s how it was.”

Injuries have plagued Sport and Leisure from the beginning of the season. McAllister claimed January can’t come quick enough as he seeks to strengthen his squad in the transfer window.

Kevin Niblock is also unlikely to feature much in the new year as his GAA commitments take priority. Niblock is unavailable this weekend as his is playing for Ulster in the Railway Cup, but McAllister was quick to hail the impact of the Antrim football captain.

“He probably won’t play much come January but that’s something we knew when we signed him,” added the Sport and Leisure boss. “He is a Gaelic lad and we have no problem with that. He lets us know when he is available to come in and help.

“What I will say is that, when he has been there, he has been quality. “I do feel that, if he had have been there week in, week out we wouldn’t be in the position we are in.”

With Liam Carland and Pearse Tully set to return to the squad, McAllister is hoping last Saturday’s win can kick-start their campaign. “There is no point in beating Bangor and then lying down against DC,” said McAllister.

“There is something there. There’s a fight there and we have the players to get up the league and to where we feel we deserve to be. “I have to mention Darren Gallagher. He just lost his grandfather but I asked him to play last week and he stepped in and scored a goal and set up the winner. “The win meant a lot to everyone in the club.

“Since I have come into the club, people have been saying we are very hard to play against and we have to get that back. “We are big and strong, but we can play football with the best of them. You have to win your battles first. “The only thing you get confidence from is wining games. It is not something you can go out and buy.”

While Sport and Leisure gained their first win of the campaign last Saturday, Donegal Celtic suffered a 1-0 defeat to Moyola and Stephen Hatfield is hoping for a positive response from his men.

“Last weekend’s result was disappointing,” said Hatfield. “If the game had have continued until today, we still wouldn’t have scored. “We had more than enough chances – clear cut chances.

“Credit to Moyola, they dug in and got the win. We were very disappointed. “We are aware Sport and Leisure have a few players back and it will be a tough match up at their place, but we are looking forward to it.”

“It is the worst game we could get at the minute,” added Hatfield. “We are down to the bare bones. “Last Saturday, we had 11 first team players available and two of them are injured for this Saturday.

“I know Sport and Leisure have been in that position so we’ll have no excuses. “At the very minimum, we would be looking to bring in four or five players in January. “I would like to think two or three of those would strengthen the starting 11 straight away.”