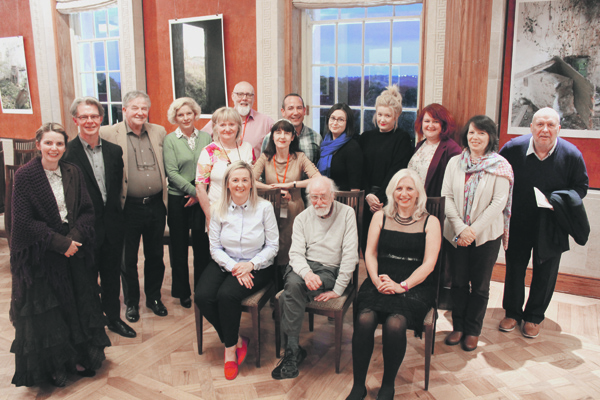 WITH the Irish Language Act still a bone of contention at the Assembly, DUP, Sinn Féin and SDLP MLAs put their differences aside and came together at a recent ‘closed door’ launch at Stormont celebrate cultural equality of the Ulster Scots and Irish heritages and a shared future for the north through the vision of one local woman.
North Belfast artist Lise McGreevy was in attendance to launch her three-year project, entitled Abandoned; Not Forgotten? in her bid to promote her message of peace and reconciliation on a local and global stage.
Abandoned; Not Forgotten? is Phase II of Lise’s three-year art programme, Peace and Reconcile, the first stage of which was endorsed by MLAs and launched at The Long Gallery last year. At that time, both the First and Deputy First Ministers were presented with bespoke artwork.
Following success at the Engine Room Gallery and Stormont; this installation will have the honour of hosting the first exhibition launch of the Aspects Literature Festival 2017 on 13th September at 7pm at Sync Gallery, Dufferin Road, Bangor. The Deputy Mayor of Bangor will open the wine reception and members of the public are welcome to attend for a night of art, culture and music. The event will be hosted until October 23.
For Phase II Lise worked with three other artists, composer and artist Marie Therese Davis, Poet Jim Johnston and film-maker Paul Whitaker. Each of the four created a body of work which to them answered the question; have we forgotten the heritage and culture that once united us, for the sake of the politics that divide us. All four agreed the answer was a resounding no.
North Belfast DUP MLA Paula Bradley opened Lise’s project.
“We have so many things that we share that are important to us all, like family, friends, community – and it is because of these that we should work together, for the sake of our children towards a shared future.”
Sinn Féin's Sinead Ennis also spoke passionately about the project’s message, following in the footsteps of Caral Ní Chuilín who was guest speaker at the launch of the installation at the Engine Room Gallery in June.
"In our own history the Society of United Irishmen from my County of Down in the late 18th century were remarked about within their own ranks nationally for their steadfastness.
“But they were resolute in their belief that the rights of Irish Presbyterians and Irish Catholics would not be left behind and their universal republican beliefs of fraternity, egalitarianism and liberty for all, are as relevant now as they were then.
“In her iconic poem ‘The Man From God Knows Where’ Florence Mary Wilson reflected on that troubled but enlightened era through the oral dialect of the participants.
“Peace making and peace building along with reconciliation is difficult work. Arts, culture and sport can play an effective role in helping to achieve positive outcomes. In this Sinn Féin and Irish nationalism in general has not been idle, nor in the future will be found wanting.
“In order to achieve the best outcomes for all citizens in this region we need partners who are enabled and willing to work on a level playing field. There is a well-known saying in Irish ‘Snámhann gach bád le líonadh mara’, which means a rising tide lifts all boats’.
“On board those boats should be many issues relevant to the message promoted through this Abandoned; Not Forgotten? installation – including sport, culture, language and the arts.
“With mutual respect we can all be part of that rising tide and help create a fairer society which, in turn, enables all citizens in the north to prosper, irrespective of nationality, colour, creed or sexuality.”
Andy Allen (UUP), John Dallat and Pat Catney (SDLP) also attended the multicultural event along with the Luton Irish Forum, London and Dame Mary Peters.
Mr Allen said: “A shared future is vitally important if we are to move forward here; all cultures and heritages should be respected and we should be promoting Northern Ireland in a positive inclusive light locally and across the world.”
Ending the evening by putting her best foot forward, Dame Mary Peters stole the show with an impromptu ceili dance with the MLAs, Lise and other guests at the end of the orchestra’s ‘trad’ session.