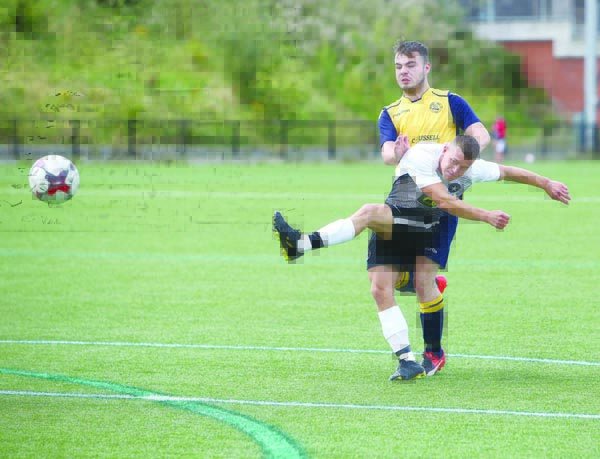 THE champagne was still being sprayed following their Intermediate Cup triumph over Queen’s at Windsor Park, but Crumlin Star boss Paul Trainor had already turned his attention to next season. A new campaign, new players, new targets and some the same.

Perhaps it is a sign of the winning mentality that prevails at the club that, despite all their success in recent season, it is the trophies that elude them that they crave the most.

Trainor makes no bones about it – Star want another run in the Steel and Sons Cup and they are fully focused on the challenge of Belfast Celtic this Saturday at the Cricky.

“It might be an old cliché that we are taking it one game at a time, but I did have a look at the draw on Saturday night,” said Trainor.

“We’ve a really tough game, but whoever gets through this one will fancy their chances in the next round, no disrespect to St Luke’s.

“We’ve got through to the semis in the last two years. We lost out on penalties last year (against Sirocco) and we were 2-0 up against Linfield Swifts the first year I was involved and got beat 3-2.

“I’ve watched Belfast Celtic and they’ve plenty of experience. It will be a tough game. Belfast Celtic get the ball down and they play good football.

“That said, it is a different cup of tea when you play at the Cricky. Our pitch is a lot bigger than Glen Road Heights. We are used to playing there and I have seen us starting to fall into a bit of form over the last three or four weeks.”

The Star have also been boosted by the return of their GAA contingent following Ardoyne’s run to the Antrim Junior Football Championship final.

The Kickhams lost out to Lisburn in last month’s decider with Joe and Aidan McNeill featuring alongside Brendan O’Neill. On Saturday, they will come up against their club colleagues Padraig and Kevin Lynch, who play for Belfast Celtic, and Trainor says his players are beginning to rediscover their very best form ahead of a busy few weeks of cup competitions.

“The boys obviously didn’t like getting beat in the final and they were disappointed for a few nights,” said Trainor.

“They came back in last Tuesday night and went back at it. The McNeills are like that.

“We’d five from our first team involved in the final, but they’ve moved on and there was buzz about the place on Tuesday night when they came back in.”

“We are started to hit form again. We are back training at Marrowbone. We don’t get back there until the end of September and I think our game gets better when we are training on the 4G. We’ve been training up at Mallusk all summer.”

Trainor was also able to persuade veteran defender Paul Prigent to put any retirement plans on hold following his Intermediate Cup heroics last May, while striker Niall Murray has signed from Ballynahinch Olympic.

Murray could form an exciting partnership up front with James Doyle for the Star this season as the North Belfast side look to emulate last season’s remarkable run in the cup competitions.

“The league goes to the wall for four or five weeks now with the cup competitions,” stated Trainor.

“Someone was saying, if things go our way on Saturday, we mightn’t have another league game until after Christmas.

“The only difference in last year was that East Belfast were out of all the cups expect in the Steel and Sons, which they won.

“They are in the Border and the Irish Cup. I’m expecting them to be there at the end of the season. Rathfriland are coming again and Ballynahinch are unbeaten too so if will be tougher than it was last season.”

Meanwhile, Antrim star Matthew Fitzpatrick says he is relishing the challenge of facing Crumlin Star after signing with Belfast Celtic.

Fitzpatrick, a former youth player at Glentoran, had previously played for Immaculata before committing fully to Gaelic Football after breaking on to the Antrim senior football team.

The central midfielder, who bagged a hat-trick for the Hoops in their 6-1 defeat of Chimney Corner last Saturday, know his side face a huge challenge to progress in the Steel and Sons Cup.

“Obviously, it has been well-documented that they are a very good team,” said Fitzpatrick.

“They won the Intermediate Cup last season beating Queen’s in the final and Queen’s are in the Championship now.

“For us, the Steel and Sons is one of the most prestigious competitions at this level.

“It is one we want to win. You want to win every competition you are involved in and this is no different. It is good to play in such a big game earlier in the competition.”