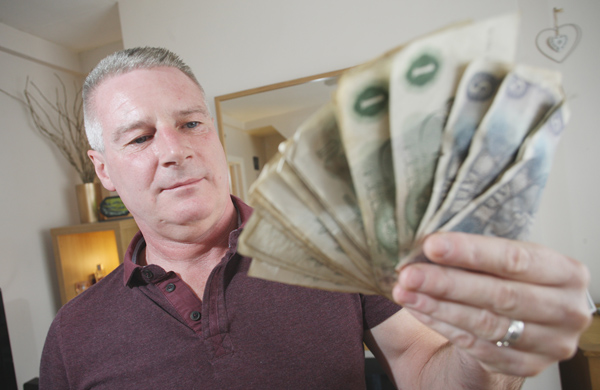 FIND: Paddy McCann with the old notes he discovered in a wallet in his Ardoyne home

THE DISCOVERY of an old wallet by an Ardoyne man doing DIY in his home has unearthed a sad yet fascinating piece of local history.

Paddy McCann came across the wallet as he ripped out a built-in wardrobe in a bedroom of his Duneden Park home. Along with £50 in old £5, £1 and 10 shilling notes was a handwritten death notice from a local social club for a Protestant bus driver, Harry Bradshaw, who was shot dead by the UDA during the unsuccessful loyalist workers’ strike of 1977.

The find has been given a further twist by the fact the UDA later wrote to the dead man’s widow apologising for the murder and claiming they thought he was a Catholic. The loyalist killer gang enclosed a £10 note with the letter of apology.

“There was a built-in wardrobe in the bedroom when I moved in here,” he explained.

“I initially thought ‘happy days’ because I could just see a load of notes. It was disappointing when I realised they was old notes.”

After opening the wallet, Paddy discovered what looked like a death insertion for ‘Harry Bradshaw’ by the Ardoyne Old Men’s Social Club.

A Citybus driver, Mr Bradshaw, from Woodford Park East in Newtownabbey was shot on the Crumlin Road at its junction with Queensland Street, where he had stopped to pick up passengers during the unsuccessful loyalist workers’ strike of 1977.

The killing resulted in a stoppage of all bus services for three days. In January 1979, UDA member Kenny McClinton was convicted of Bradshaw’s murder and that of a Catholic man, Daniel Carville.

In a grim development, the UDA later wrote to the dead man’s widow apologising for the murder and claiming they thought he was a Catholic. The loyalist killer gang enclosed a £10 note with the letter of apology.

“Perhaps it was a relative of Harry Bradshaw who lived here before myself,” added Paddy.

“I’m just going to keep hold of them. They might be worth some money in years to come.”