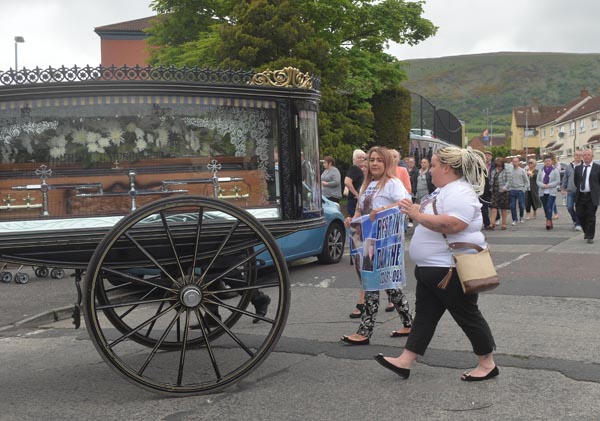 THE priest at the funeral of a hot food delivery driver murdered after being lured to his death by a bogus phone order said the 55-year-old's killers set themselves up as judge, jury and executioner.
Dan Murray was shot dead last Monday night in the Grosvenor Road area of Belfast. Last August he escaped another attempt on his life, leaving him with a bullet wound to the face.

Speaking after the first attack, Mr Murray told the North Belfast News that he was not involved in drugs, a claim that had been made against him. At a police briefing following his death last week the detective investigating the murder confirmed that Mr Murray was known to the police but said it was “too early to say at this time” if the murder was drugs-related.

Residents protested near the scene of the shooting last Wednesday evening. Mr Murray’s shooting was the fourth in North and West Belfast in as many days.
Speaking at Mr Murray’s funeral Mass on Monday, Fr Brendan Smyth from Holy Trinity Church in West Belfast said his death was a “horrific one” and that his life had been “snuffed out in the blink of an eye”.
“This is the second time in as many months that I have had to stand at the door of this church and receive the remains of someone who was murdered,” said Fr Smyth.

“And I fear for the impact it will have on those who come here day in and day out to seek comfort and consolation and peace of mind as they strive to live each day in the light of teachings of the Gospel.
“They too must be affected by how violent this city has become. The consequences of Danny’s death will therefore ripple out for a long time to come
“How long must we wait before the lessons are learnt, that what so ever you do to the least of these my brothers and sisters you do to me.”
The interment took place after the funeral service at Milltown Cemetery.