Danny’s got a mountain to climb (or walk) 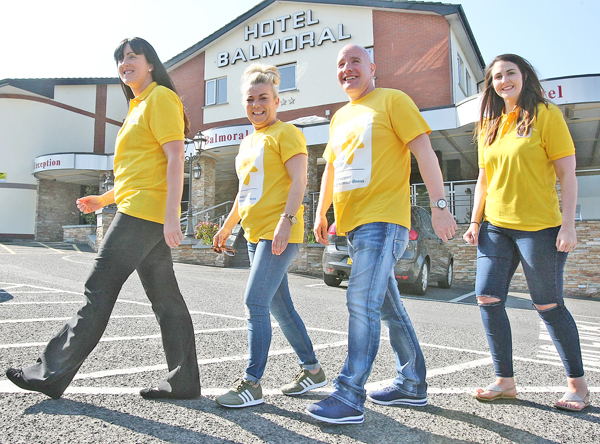 STEPPING OUT: Marie Therese Morgan, Sharon Fennell, Mark McCabe and Grace Smyth gear up for the charity walk which is taking place this Saturday morning on Divis Mountain

A TAXI driver from Dunmurry plans to raise money for a local cancer charity through his fundraising efforts taking place this weekend.

Danny McCabe is urging people to come along and get involved in the Divis Mountain walk in aid of Marie Curie this Saturday morning, explaining he was inspired by a previous charity challenge.

“I took part in the Slieve Donard charity challenge a few years back, walking the highest mountain in the north for charity,” explained Danny. “It felt great completing the challenge knowing it was all for a good cause. I thought it would be great to bring such a good cause to our doorstep, so where better than Divis Mountain?”

Divis Mountain rests in the heart of the Belfast Hills, which provide the backdrop to the city's skyline, offering spectacular views. Almost 70 people have signed up for the mountain walk this weekend but Danny hopes more people will get involved in the run-up to the event, helping raise vital funds for the charity.

“I haven’t got a set target in mind, but ideally I want to raise as much as possible, so the more people getting involved in the walk the more we can get for this brilliant charity.

“The plan is to come to the Balmoral Hotel that morning where buses will take us to the car park of Divis Mountain. Once we arrive people will get bottles of water and bananas and all that to prepare us for the walk. Everyone is welcome and if you can’t do the walk you can come on down to the 80s disco at the Balmoral that night, including those who couldn’t make the charity walk due to First Communions.”

Danny will be supported on the day in his efforts by local volunteers from the Falls and the Colin Glen fundraising groups.

Marie Curie provide care and support for around 2,500 people living with a terminal illness each year.

Grace Smyth of Marie Curie said: “Marie Curie are delighted to be involved with this wonderful local event and we hope to see lots of local faces on Saturday May 20th.

There are more than 160 Marie Curie nurses working in Northern Ireland, caring for around 3,000 terminally ill people and their families in their homes each year.

“Thanks to the generosity of our supporters, our services are offered free of charge to people with any terminal illness. We need to raise around £3.5 million a year to fund our hospices and nursing care in Northern Ireland.”

For more information visit www.mariecurie.org.uk. Sponsorship forms available from Danny on 07887842450 or at the Balmoral Hotel.