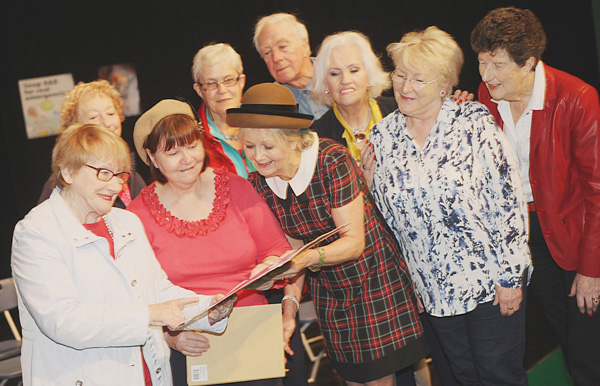 A DRAMA group established to provide a creative outlet for the over-60s and the retired will put on two shows over the next week in aid of charity.
Womberang was one of Adrian Mole creator Sue Townsend’s most famous drama productions and the U3A FunDrama group from the ‘University of the Third Age’ network will perform it in the Belvoir Players Studio on Wednesday night (June 29) and St Bride’s Hall next Tuesday (July 5).
Townsend turns upside down the antiseptic sterility of the hospital waiting room in this entertaining short comic play, as Rita whirls into a drab gynaecology clinic and smokes, rearranges the furniture and frightens away the clerk.
Joan Hayes said they wanted people to come out for a night of entertainment all for a good cause.
“This is our first little production and we have chosen a funny little play set in the 1980s in a waiting room.” she said. “There are eight characters in all an it’s a great night out.”
The proceeds from Wednesday’s performance will go towards diabetes research, with the St Bride’s evening contributing to The Samaritans.
University of the Third Age (U3A) is an international network that allows older people to take part in a range of activities with people their own age. Members take part in a huge range of activities over the year, with drama just one example of the programme provided.
Joan said the night would have something for everyone and issued a cordial invitation to all to attend.
“The play will be the main event and the U3A will also provide entertainment on the night so it will be a lot of fun.
“Tickets are only £8 and it’s for a great cause so we want to see as many people come along as possible.”
Both productions begin at 8pm and tickets can be bought at the door.
For more information visit www.belfastu3a.org.uk