Gerry Adams: Economic self-government in a United Ireland is the future 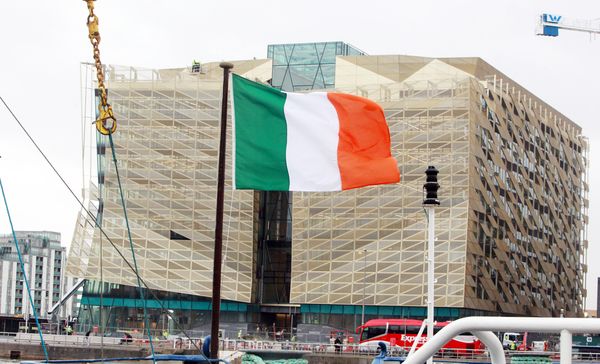 AN ECONOMY WITH PEOPLE AS ITS PRIORITY: The new Central Bank Offices near completion in Dublin City Centre in 2017. The building.was originally proposed as the HQ of the failed Anglo Irish Bank. Rollingnews.ie

LAST Friday, as this column noted, Sinn Féin published a new discussion paper – The Economic Benefits of a United Ireland.

At the heart of the paper is a belief in economic self-government. The right and the ability of the people of Ireland to plan, manage, and develop our island economy in our best interests. It makes sense. Whatever differences may exist between the political parties on this island it is clear that they would prioritise economic policy in the interests of those they represent.

On the other hand British government’s rule in British interests and take political and economic decisions that suit their objectives and not those of the people of the North and of this island.

The answer is yes. As Pearse Doherty TD remarked at the launch; “The health of an economy, the standard of living of its citizens; is driven by investment, research, innovation, good public services and access to the global economy. On all of these, not only is the Union stuttering, it is moving backwards...

“The North deserves better, and a United Ireland offers so much more. Irish unity would allow for coordinated investment and development; something the Border region has been missing for a century. Irish unity would utilise economies of scale; allowing one economy to develop rather than having two economies compete. The current trajectory of the all-island economy attests to these opportunities”.

The reality is that the Northern Executive doesn’t have access to any significant financial levers except rates.  90% of the Executive’s budget is directly controlled by London. The Assembly cannot devise long term fiscal policy or plan for the longer term. This is dictated by the British Government.

But what of the so-called British subventions? British  official stats put the subvention at around £10 billion per annum. In reality, the true value is somewhere between £2.5 and £6 billion. The economic payoff from uniting the two economies on the island would more than compensate for the loss of the subvention. Economists such as Kurt Hubner and David McWilliams agree.

With almost seven million people and a larger economy, Irish Unity will create better jobs, increase incomes, improve our quality of life and deliver better public services. The discussion paper considers the advantages of Unity for the promotion of the Green Economy; the precedent of German re-unification; and the role the EU can play in successfully reuniting Ireland.

If you want to find out more go to www.sinnfein.ie. Be part of the discussion.


Covid 19 and the conspiracy business

There is hope on the horizon that a vaccine may soon be available for the Covid-19 virus. This is a very welcome development but until it is available and distributed it is vitally important that citizens stick to the consistent advice that the health authorities have been giving since the start of the year.

Wear a mask; socially distance; wash your hands; and use a hand sanitiser.

The changing conditions have meant that the regulations, restrictions and lockdown processes are constantly changing. This has led to confusion, annoyance and anger. In our own place this has been added to by the refusal of some DUP ministers to play a consistent and constructive role alongside their colleagues on the Executive.

The reality is that the Coronavirus is an unparalleled event in our lives. At the time of writing almost one and a half million have died across the world. In the North almost a thousand people will have died by the end of this week and in the South over two thousand have died. Thousands more have been hospitalised or been taken ill with this virus.

This Friday the North begins a two week lockdown. The restrictions will create hardship. But if lives are to be saved then it is necessary for us to follow the health advice.

One deeply worrying feature of recent months has been the growth in conspiracy theories around Covid-19. Some say that Covid doesn’t exist; that wearing a mask is dangerous; that the Coronavirus is part of some grand plan by a cabal of leading states and politicians to control the world economy and limit peoples’ rights; and/or is a plot by big pharma to make money. In addition Covid deniers claim that the number of people dying from Coronavirus is being deliberately exaggerated by governments. And there is the claim that the extension of 5G technology is to blame for the spread of the disease.

Lies; misrepresentation of facts; and right wing fantasy propaganda have become part of the daily diet of millions on social media.

One dangerous consequence of this is that increasing numbers of people are not just saying they will refuse to take a vaccine to immunise against Covid when it becomes available but are questioning the efficacy of vaccines in their entirety. A survey of 26,000 people in 25 countries last month by the YouGov-Cambridge Globalism Project in collaboration with the London Guardian found “widespread and concerning scepticism about vaccine safety.”

It reported that 20% of respondents across 19 countries gave some credibility to the view that “the truth about the harmful effects of vaccines is being deliberately hidden from the public”, including 57% of South Africans, 48% of Turks, 38% of French people, 33% of Americans, 31% of Germans and 26% of Swedes.

According to the World Health Organisatio: “Vaccines have been one of the biggest success stories of modern medicine. WHO estimates that at least 10 million deaths were prevented between 2010 and 2015 thanks to vaccinations delivered around the world. Many millions more lives were protected from the suffering and disability associated with diseases such as pneumonia, diarrhea, whooping cough, measles, and polio.”

So, in these dangerous times ignore  the naysayers and sceptics, and the conspiracy theorists. Follow the health advice.

The Speaker, King Billy, the Pope and the painting

Sinn Féin MLA Alex Maskey is the Speaker – An Ceann Chomairle –  of the Assembly. In the waiting room of his official office in Parliament Buildings there hangs an unusual painting.

When it was bought in 1933 by the Unionist government to adorn the wall of their new Parliament Building it was claimed to be a work by Pieter van der Muelen. He was allegedly a court painter for William of Orange. It is supposed to show a triumphant King William on a white charger landing at Carrickfergus at the start of his successful war with the English King James II. When it was announced that the painting had been purchased unionist MPs cheered.

In March 1933 the painting was unveiled in the lobby outside the Members’ Room. The applause which had accompanied the news of its successful purchase quickly turned to horror when it was examined.

If you look closely at the painting you will see Pope Innocent XI, resting on a cloud above King Billy, giving a papal blessing to the King. Leading William and his entourage is a man on foot – apparently a Franciscan friar – with rosary beads in his hands. Pope Innocent XI who ordered a Te Deum to be sung when news arrived of Williams victory at the Boyne, was an ally of the Prince of Orange in a war then convulsing much of Europe.

A few months after it was unveiled the painting was damaged by Charles Forrester, a member of the Scottish Protestant League who was affronted by it. It was restored but removed from public view. It was placed in the Speakers Office in 1983 where it remains.
There is some speculation that the painting is not a representation of King William at all or of his landing in Ireland but has to do with his war against the French in the Low Countries in Europe.

It is also claimed that van der Muelen was not a court painter for William. It is said that he was a minor painter, and may not have been responsible for the painting at all.

Before the Covid restrictions the painting was a popular part of the tour which the Assembly staff provided for those who visited the building. So, when the tours are eventually reinstated post Covid and if you want to see a painting naively bought by the Unionist government in 1933 which does not show King Billy on his White Charger landing at Carrickfergus but has a more interesting story to tell, why not visit Parliament Buildings for a wee juke.