Exercise is the key to a long and happy life, says our Billy 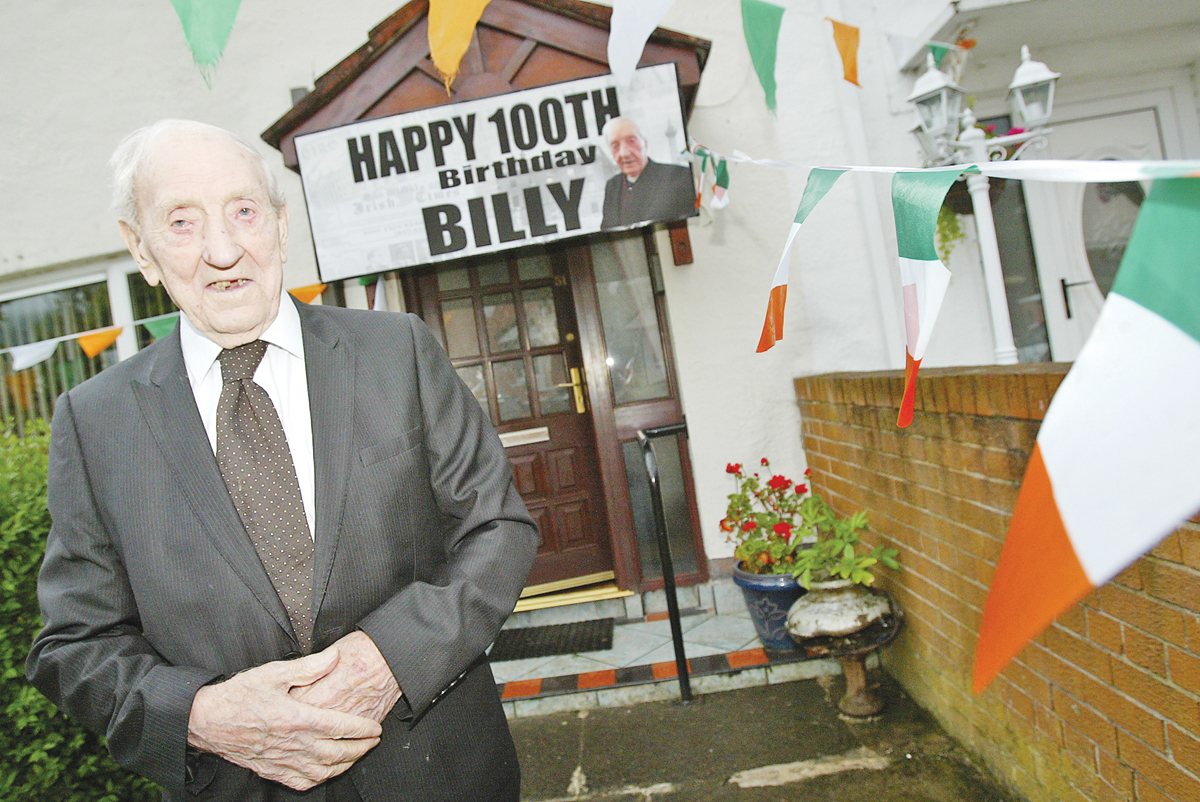 Many happy returns: Billy Burns celebrating his 100th birthday in Ballymurphy this week

WHEN 100-year-old Billy Burns was asked what his secret is to a long and happy life, he thought for a moment and then replied “exercise every day”.

“I don't smoke,” he added, “and have a banana and a bowl of porridge every morning.” He then proceeded to show how fit he was by bending over and touching his toes.

Billy, a father-of-11 and a grandfather and great grandfather of “too many to count” has been the toast of Whitecliff Crescent in Ballymurphy for the past few days and there seems to be no let-up in the partying.

His daughter Deirdre Anderson said: “The house hasn’t stopped, on Saturday night there was a special Mass in Corpus Christi. It was for our parish priest who has been here sixty years and one of the sisters who is retiring, but they included daddy in it as well.

“The bishop was there and he will be receiving a special medal from the Pope. He also got a plaque from St Vincent de Paul for his years of service to them.”

Deirdre added: “So many parishoners came up and congratulated him, it was really lovely. He played the mouth organ at the Mass while two of his granddaughters played the fiddle and the flute, it was very special, everyone stood up and clapped him – it was very emotional.

“Then on his birthday the whole street came out and applauded him, the young ones from the street came up with a cake for him and they put a banner on the front door. Everyone sang happy birthday to him and cheered him. Our parish priest also came to the house and gave daddy a lovely blessing.”
As well as birthday wishes from the neighbours, Billy also received a few special cards.

“He got a card from the Queen which he wasn’t too happy about as well as a letter from President Michael D Higgins,” she laughed. “He was born in 1916 so he also received a beautiful Proclamation and the doctors surgery were on wishing him a happy birthday as he is the oldest person on their books.”

Billy wants to thank everyone for all their kind wishes.

“I knew nothing about the Mass, I thought the function was for Sister Bernadette’s retirement, I didn’t realise it was for me as well, I couldn’t believe it.

Billy’s daughter Betty Meharg said: “He got more adulation than Lizzie got for her 90th there and he deserves it.

“We are having another party for daddy on Father’s Day in the PD for all the family. His grandkids will be dressing up in clothes from different decades. He deserves to be celebrated.”