Familiar foes have final berth in their sights 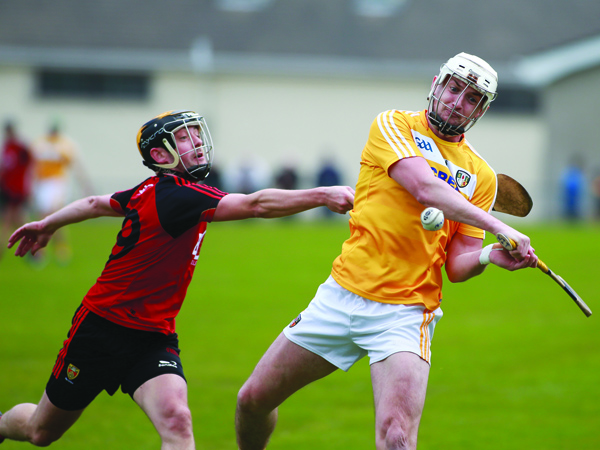 IT’S a familiar pairing at Cushendall this Saturday as Antrim and Down meet in the Christy Ring Cup for the third time in two seasons (5pm).

Back in the 1990s and early 2000s, battles between the counties offered a place in Croke Park at MacCarthy level whether that was in the form of an All-Ireland semi-final or latterly, quarter-final, but these days it’s about reaching the final of the final of hurling’s secondary competition and the opportunity to get back into the top tier.

Last year in Loughgiel, Antrim survived the mother of all scares and had goalkeeper, Chrissy O’Connell to thank as they edged past the Ardsmen, but three weeks past, the same intensity was absent as Antrim had that bit more going forward to pull away for a 3-15 to 0-12 win in round 2A of the competition.

Whether that was because both sides knew they could well meet again this year with Down defeating London to reach a semi-final before being paired with the Saffrons, or perhaps because both sides were missing a number of regulars remains to be seen, but the prize of a place in the final in Croke Park on June 10 ought to bring the best out of these Ulster rivals.

While Antrim will go into this game as favourites to progress, joint-manger Terence McNaughton says they are taking absolutely nothing for granted and insists this Antrim team remains a work-in-progress despite having already achieved one of their objectives this year by winning promotion back to 1B in the League.

“We have never perceived any draw (to be easy),” insists the Cushendall man.

“People don’t understand that from where we’ve come from to where we are going isn’t ever half-way as far as the ambition of the team is concerned and the work that needs done.

“We’ve had a good year to date, there’s no doubt about that. Our number one priority was to get promotion in the League, more regular games against the teams that are above us. For us, that’s the only way we felt we could improve.

“In the greater scheme of things, we have a long way to go yet. As we stand, we probably couldn’t survive in Division 1B, so we wouldn’t be taking anyone for granted.

“Any advantage we can get, we’ll take and take every game as it comes, prepare and treat everyone with respect. That’s not bullshit, that’s honesty.”

Antrim will welcome back Neil McManus this weekend after the Cushendall man missed the previous meeting with Down as the game clashed with his wedding, while Paul Shiels could be another to return although a call on ‘Shorty’ will be made closer to throw-in.

For Down, John McManus should be available having played in last week’s win over London after the corner back was unavailable due to work commitments for the first Antrim game, while Danny Toner is another who returned last week and should take his place in the forwards.

The three-week lay-off for Antrim was especially welcome between games having been forced to play six vital games in as many weeks before their win over Down and McNaughton is hopeful that freshness will be evident this weekend.

“It’s not even the physical side. When you have to get your mind up for every game and every game was big….

“I don’t know if people understand this, but you can do no work whatsoever when that is going on because you are going back on Tuesday to have a recovery session and then Thursday you are preparing for the game on Saturday where you are having a knockabout and a talk, so for weeks we were just trying to stay afloat.

“These past weeks we have been able to have a couple of good sessions now.

“It’s trying to keep people fresh. That’s probably the biggest thing, the enthusiasm of people wanting the ball, wanting to hurl whereas you are going for so many weeks in a row and then the club you can go a bit stale.”

Both sides shouldn’t be lacking in motivation or enthusiasm this weekend given the prize on offer. Down are aiming to reach their first final since 2013 when they defeated Kerry, but Antrim were of course in last year’s decider against Meath that was shrouded in controversy with ‘scoreboardgate’ forcing a replay they ultimately lost.

There is of course an element of righting that wrong for Antrim fans, but McNaughton says the chance to hurl and win silverware at Croke Park ought to be their only inspiration.

“Last year was a different year,” he maintains.

“We didn’t know the players last year and had no work done. For me as an ex-player, any player should have the ambition to play in Croke Park. It is where you want to express your talents. I would love to have played in the new stadium.

“You ask any kid up the Falls Road where they want to play hurling and they will say Croke Park. As you get older, that doesn’t leave you. You still want to play in these places.”

McNaughton does feel there is a difference between this year and last and is hopeful their fighting qualities can come to the fore on Saturday.

“The big factor for me this year is that we have become a very tight group,” he explained.