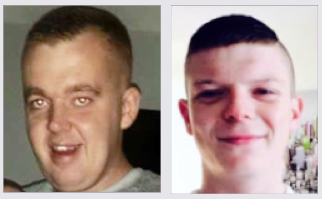 A HEARTBROKEN West Belfast mother who lost her son to drugs has been inundated with messages of support from people who have experienced similar loss, after setting up a Facebook page which attracted thousands of followers in just a few days.

Patricia Browne from Lagmore created the page in the wake of her son’s death two weeks ago.

“At the end of the day he was my baby, even though he was an adult he was always my little boy,” she said.

After speaking to the Andersonstown News about her son last week, Patricia was inundated with calls of support and through friends, new and old, created the ‘Silent Deaths and Suicide Through Drug Dealers Who Kill Our Children’ page.

“Originally the idea was to create a page for mothers in West Belfast to come together to take back our streets from these drug dealers, only I’m hopeless with computers so it was actually a girl, Louise Hagan, who helped set it up and I can’t thank her enough,” she added.

“We only had it up a few nights ago then all of a sudden similar pages right across the north, some set up by fathers, were reaching out to us. Deciding it would be unfair to exclude them we opened the page up to include everyone,” she explained, adding that not one bad message has been received.

Group administrator Louise Hagan said she was only trying to help after being approached by Patricia to create an online space.

“I was asked to set up the group by Patricia and another girl, Deirdre Lennon, because they weren’t sure how to do it. They named the group and I just set it up and tagged people that have been affected.

“I made the page to bring people together through the loss of their children so they know they’re not alone. I haven't lost a child but I'm a mother myself and I can't even begin to imagine what those parents are going through. I’m nobody special I was just trying to help.

“I’m just glad that they know they’re not on their own. The stories on the group is just heartbreaking.”

Patricia said she is ‘overwhelmed’ by the response from families worldwide who share her pain and many more who like herself, still need answers.

“You don’t realise how many people have been affected. The page was shared all over Dublin where my son used to box, and then people from Australia and the US began sharing their stories,” she said.

Whiterock woman Deirdre Lennon, who lost her son Caomhan (19) on Mother’s Day two years ago, explained she was ‘weary’ of discussing his death due to the stigma attached to drug related deaths.

“Most people had it in their heads that Caomhan took his own life, but he didn’t,” she explained. “We didn’t know what Caomhan died of until the coroner’s inquest a few months ago. It was a sad day for all of us. He too died from a cocktail of tablets so I think it’s time to fight these drug dealers and get them off the streets. How many more children have to die?” she asked.

“When it happened I felt totally lost I didn’t know who or where to turn to and I feel this page makes a real difference by opening up discussions with people who know what you’re going through. I believe all parents need to get together and need to make other children aware of the risks and save lives.”

Each story posted shares a similarity through the young ages of those who lost their lives, some with children of their own and all with their whole lives ahead of them.

“We have a serious crisis here in West Belfast, children as young as 12-years-old are getting access to drugs, people are even selling their prescription drugs and something needs to be done,” continued Patricia.

“Our politicians are fighting up in Stormont about trivial things, well what about fighting for our kid’s lives? Politicians should be fighting for vital mental health facilities to save our children.”

Patricia said she has been left ‘devastated’ by her ordeal but vowed to get justice for her son.

“Some days I just want to be with my Christopher but I know I need to keep going, I need to keep fighting to get these drugs off our streets. I went to his grave from 7am until 2pm and just vowed to get justice. The only comfort I take from this nightmare is knowing my son’s death stopped this unbearable heartache plaguing another family.”