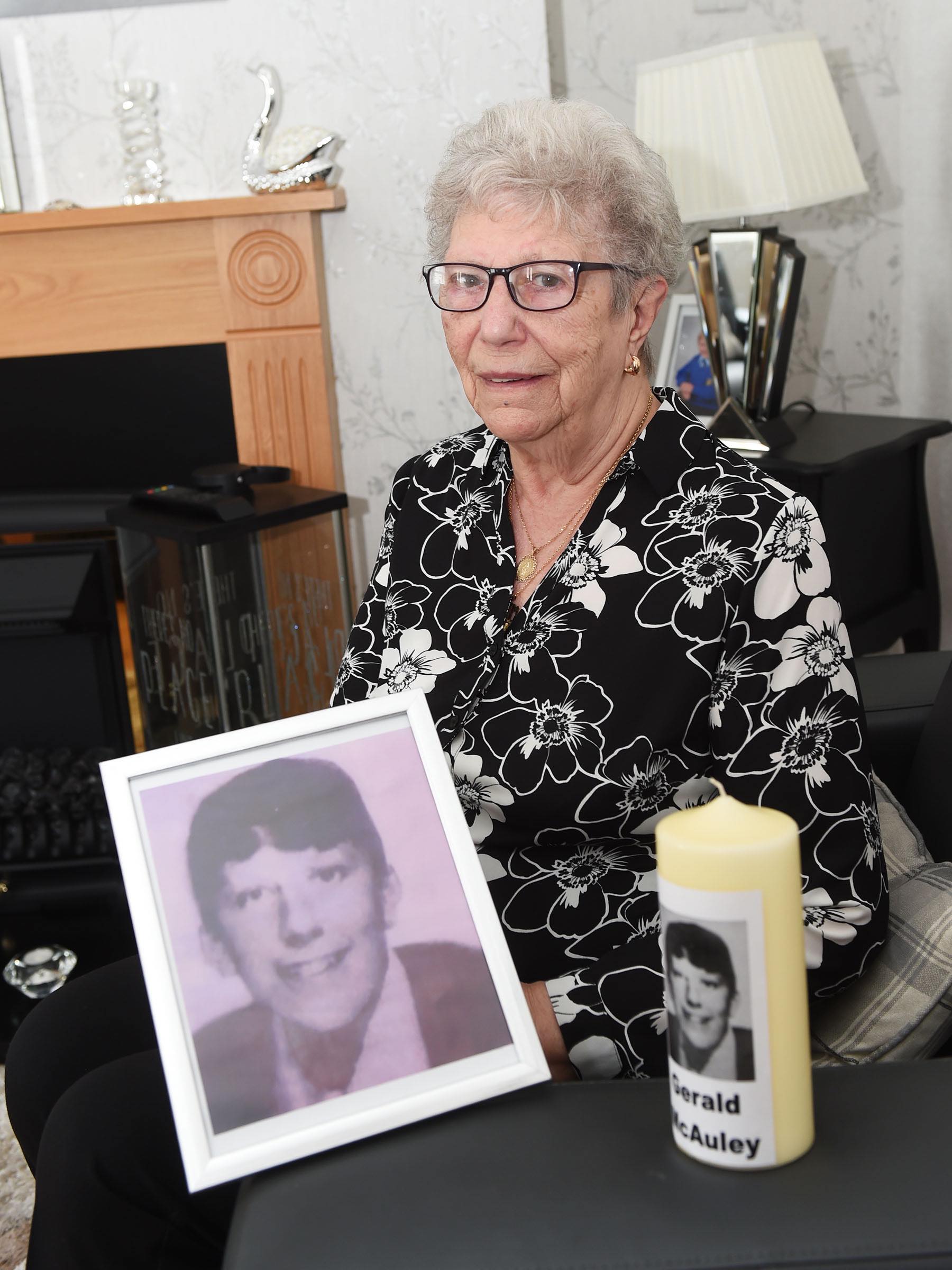 MEMORIES: Nellie McAuley with a portrait of her son Gerald

THE mother of 15-year-old Gerald McAuley who was shot dead by a loyalist gunman in August 1969 says she has never felt any hatred towards the man who took her son’s life.

While helping families move out of the burned streets of Clonard, Gerald, a member of the Fianna youth, was shot dead by on Waterville Street, not far from his Colinward Street family home.

During the Scarman tribunal, an acting superior of Clonard Monastery spoke of how he had given Gerald and three others hit by shotgun blasts the last rites. Gerald was taken to the Royal Victoria Hospital where he was pronounced dead at 4.45pm. The tribunal concluded he had been shot by a Protestant gunman.

Speaking to the Andersonstown News Gerald’s 88-year-old mother Nellie spoke of how her second oldest child was born on the Feast of St Gerard and how much he loved fishing, birds, motor racing and bikes.

“I remember when Gerald left school, he went to St Thomas’, he got himself a job in a factory in Northumberland Street. I remember he was working in it around three weeks and he came home and said ‘Mummy, the boss wants to see you.’ The first thing I asked was ‘What have you done?’ I went down and the man praised Gerald, how much of a good, clean worker he was and told me how much he had in common with his own sons. He told me how he wanted Gerald to go to the Tech come September but that Gerald had told him how he wanted to join the Irish Merchant Navy when he came of age. I said if that’s his wish I can’t hold him back.”

Nellie spoke of how on August 14 1969 she had gone out to look for Gerald as he hadn’t come home.
Telling how fraught the roads around Kashmir, Falls and Albert Street had become as violence flared around her and her son Jim as they looked for Gerald.

“I remember Gerald came in around 2am that night and went to bed. I got up the next morning to go to work, I worked in C&A as a cleaner and I turned on the news. It was saying about Patrick Rooney, Trooper McCabe and the fella, the bus driver from Ardoyne who had been killed. I came home later that day and Gerald was in the house with his friend. I said to him ‘Waren’t you in work?’ He said ‘Mummy, there is no work, it’s gone, it’s away.’ He went straight out again and that was the last I saw him.”

Nellie said she went out to look for Gerald as trouble continued to flare and found herself at the City Hospital.

“I remember the Sister on the ward brought me into the office and I said to her that I was looking for my son. She went out and came back and I will always remember how she said; ‘No mother, he’s not here, there’s only a boy of around 19 in Musgrave.’ I said that’s him, that’s Gerald. “Gerald was a big lad, he had it in the shoulders, he had a big frame and he wore a size 11 shoe. I remember later a priest being on the other side of the street from our house, he was wearing a heavily beaded vest, a beret and a stick and said ‘Mrs McAuley your son has gone to Heaven,’ then he turned on his heel and walked away.”

Following Gerald’s death Nellie recalled her feelings: “You’re here and you’re not here. About six weeks after Gerard was buried we were invited up to the old Felons at the side of the cemetery and that night they had a colour party come on the stage and said that night that Gerard was in the Fianna from 11 years old. Looking back on it Gerald asked me could he go away for a week with the boys out of school. I remember he said he needed five shillings and could I give it to him. He said he needed an enamel plate, cup, mug and even then the penny didn’t drop. I brought him down to Millets and we got the plate, everything. The fella in the shop said he would need a wee container to carry his eggs in and we got that as well. Soon after he came in to say ‘Mummy I’m awful sorry some of the boys couldn’t get their money and couldn’t go.’ I don’t know how long after that then he did go.”

50 years on from the anniversary of Gerald’s death on Thursday, Nellie reflected how she “wasn’t functioning right” half a century ago.” “I never had any hatred. Gerald died on the Feast of the Assumption, August 15, that’s Her day, he was taken on Her day and that’s the way I looked at it.”

A wreath-laying ceremony for Gerald McAuley will take on Friday, August 16 at 6.30pm in Bombay Street Memorial Garden.