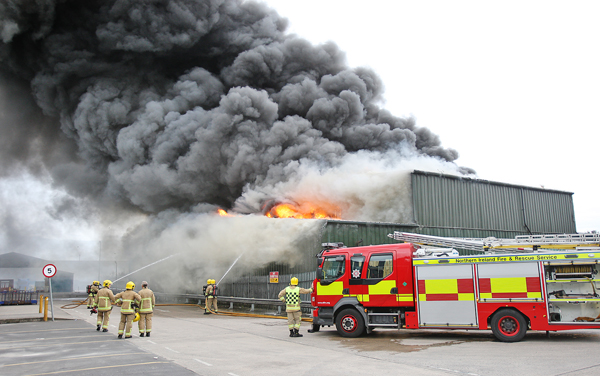 MANAGEMENT at a West Belfast recycling plant say they are open for business today after a major blaze broke out at their premises yesterday afternoon.

Seven appliances were called to Wastebeater Recycling on Blackstaff Road to deal with a “large quantity of rubbish on fire”. Huge clouds of black smoke hung over West Belfast as motorway drivers were warned to slow down as they made their journey home.

Several fire engines are still in attendance at the facility this morning. Fire Service Area Commander Aidan Jennings said firefighters are continuing to dampen down the fire.

“It’s burning both on the surface and smouldering underneath, it is difficult to get access to that,” he said.

“We need to get into the building and pull that material out and get access and extinguish (the fire) entirely.

“The problem we have with that, is that the building has been impacted significantly by fire. Therefore we are assessing this morning structural integrity to see if we can access (the building).”

West Belfast MP Paul Maskey said he had spoken to Wastebeater management and had been given assurances that there are to be no job losses at the plant.

SDLP West Belfast MLA Alex Attwood said that the nature and scale of the blaze raised serious questions about the location of such plants.

“An incident of this nature must, however, raise serious questions. Key among those-should a plant of this nature be located in such close proximity to a residential neighbourhood, located close to other businesses or located in an industrial/manufacturing park?” he said.

People Before Profit Councillor Matt Collins commended the efforts of the emergency services.

A spokesperson for Wastebeater Recyling said: "We acknowledge the inconvenience caused to local people and we will do all that we can to minimise disruption over the hours and days ahead.

"We have contingency plans in place to deal with any major incident and those plans were activated immediately. We are contacting our customers and they can be assured that despite this setback we will be open for business as usual tomorrow and their waste management service will not be impacted.

"We will endeavour to keep local people informed as the situation develops."