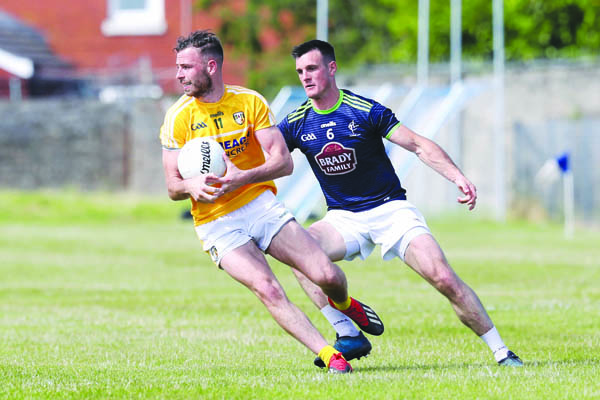 FORMER Antrim star Matthew Fitzpatrick admits he’d love to don the county jersey again, but concedes it will be some time before he lines out for the Saffrons.

Having secured a move to Irish League title contenders Coleraine at the beginning of 2020, Fitzpatrick’s Gaelic football commitments are on hold for the foreseeable.

Prior to the Coronavirus pandemic, Coleraine were challenging for a domestic treble after wining the League Cup and with the league title and the Irish Cup also in their sights. Yet, Fitzpatrick says he has also been keeping a close eye on Antrim’s fortunes this season as Lenny Harbinson’s men seek to escape from Division Four of the Allianz Football League.

With five rounds played, the Saffrons were on course to secure promotion and wins over Wicklow and Waterford in their final two games would have clinched a top-two berth.

“I keep in touch with Paddy (McBride) and some of the other Antrim boys. I know how they are going and it makes me miss it that little bit more,” said Fitzpatrick.

“I’m enjoying playing football with Coleraine and I’m enjoying giving it a go. I’d love to do both, but I can’t – I’m contracted to Coleraine.

“It is a pandemic and there’s nothing you can do about it. It is just bad timing for them. If they had have gotten those two matches played, I firmly believe they would have got promoted. On the grand scheme of things, it isn’t much of a big deal, but they almost had it (promotion) secured and it is such a shame for them.”

While his own departure significantly hindered Antrim’s prospects of securing promotion, Harbinson’s squad received a boost by the return of seasoned campaigners Paddy Cunningham, Michael McCann and Tomás McCann. Although the latter had yet to return to the matchday squad, Cunningham and the elder McCann sibling had played a key role in ensuring that Antrim’s fate was in their own hands going into the final two games.

The return of Cunningham and the McCann to county football with the trio all in their mid-30s gives Fitzpatrick hope that he could resume his inter-county career further down the line.

When asked if he sees himself playing for Antrim again, Fitzpatrick remarked: “Aye, I do to be honest. I just don’t know when.

“I’ll be optimistic. I’m maybe only saying it because I’d love to play for them again. I don’t know when, I don’t know how. I’m certain it won’t be in the next couple of years. I’m 25 now so I’m almost certain I won’t play for them over the next few seasons.

“In an ideal world, I’d play both, but I can’t and I am committed to Coleraine. I’d let myself down if I didn’t give 100 per cent to Coleraine. For the next two years, I’ll be completely committed to them. I don’t know how my football career is going to go.

“If you look at Paddy (Cunningham) and Mick (McCann), they took a few years out and they are back now and better than ever. “If I could have half as good at their age, I’ll be back playing county no bother.”

While Fitzpatrick is a huge loss to Antrim, he is, arguably, a bigger loss to his club St John’s.

The Whiterock Road outfit slipped down the pecking order last season and bowed out of the Antrim Senior Football Championship following a quarter-final replay defeat to Portglenone with manager Gearoid Adams leaving to take up a role as Paddy O’Rourke’s assistant at Down side Burren. St John’s are currently managed by John Kelly and Mark Bohill while Division One of the Antrim all-county league were due to commence at the end of March with the Johnnies scheduled to travel to St Gall’s for a West Belfast derby clash this week.

It remains to be seen when football will resume and Fitzpatrick says he was uncertain of just how many games he would have been able to squeeze in for St John’s with the Coronavirus pandemic only adding to the uncertainty.

“I hadn’t really given it much thought to be honest. I wouldn’t have been able to play with St John’s until Coleraine’s season has over completely,” added Fitzpatrick.

“I’d have played a bit, but it would have been down to luck how many games St John’s had during that time.”