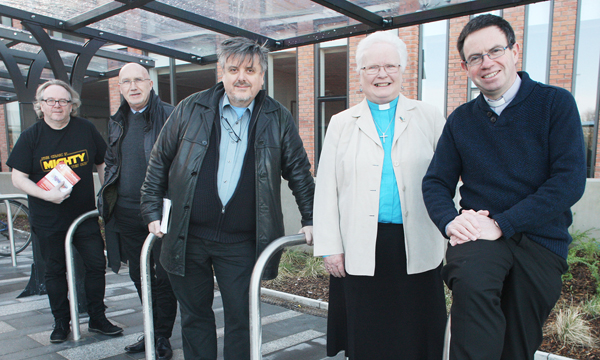 ADDRESSING the legacy of conflict in the north will form the theme of this year’s Four Corners festival with one of its founders saying he expects some people to struggle with some of the more challenging events that have been organised.

Fr Martin Magill established the festival in 2012 while Parish Priest of Sacred Heart Church along with Presbyterian minister Steve Stockman, with the aim of fostering relationships between local faiths.

Now relocated to Ballyclare, the priest said that it was important that North Belfast was included in the programme given the level of suffering experienced by its residents.

“The theme for 2017 is ‘Belfast, Our Wounded and Wonderful City’ and I suppose it’s about looking at suffering and healing but we will also be putting a wee eye on legacy issues.”

Pointing to the ‘Wonderful Wander’ event on Saturday, Feburary 4, Fr Magill said those attending would find it challenging.

“The Wonderful Wander starts at Conway Mill and almost the first thing it will come to is the republican garden of remembrance on the Falls Road. Now, we understand that might be too much for some people and it will be challenging but what we can’t deny is that it’s there – we can’t airbrush it out. It is what it is and that’s why will be exploring it.”

Another event organised for North Belfast will see four Troubles victims speak about their experience of grief and reconciliation.

“The main event in North Belfast will be held in Holy Family church and we are currently trying to organise that.

“Four people who have all been wounded in some way but have gone through a healing process will tell their stories.

“Some will talk about the role faith played in this, but not all. The message will be about how we need to work through resentment.

“Some will talk about how faith has helped them but not all. It will be very interesting.”

In 2015 local artist Colin Davidson made the headlines after a portrait he painted of German Chancellor Angela Merkel was chosen for the front page of the influential Time magazine.

For Four Corners he will be interviewed in front of a live audience by security journalist Brian Rowan in the Agape Centre on the Lisburn Road.

He will discuss his Silent Testimony exhibition that saw portraits of 18 people affected by the Troubles displayed. The subject matter of the talk will be the need to create safe spaces for victims.

Fr Magill said getting someone of the calibre of Colin Davidson to talk was a major coup for the festival.

“Colin is a lovely humble guy and to hear him speak will be fascinating.”

Both Fr Magill and Reverend Stockman were presented last year with a Civic Leadership Award for their reconciliation work through the Four Corners festival. This year’s festival runs from February 3 to February 12 and more information can be found by visiting www.4cornersfestival.com