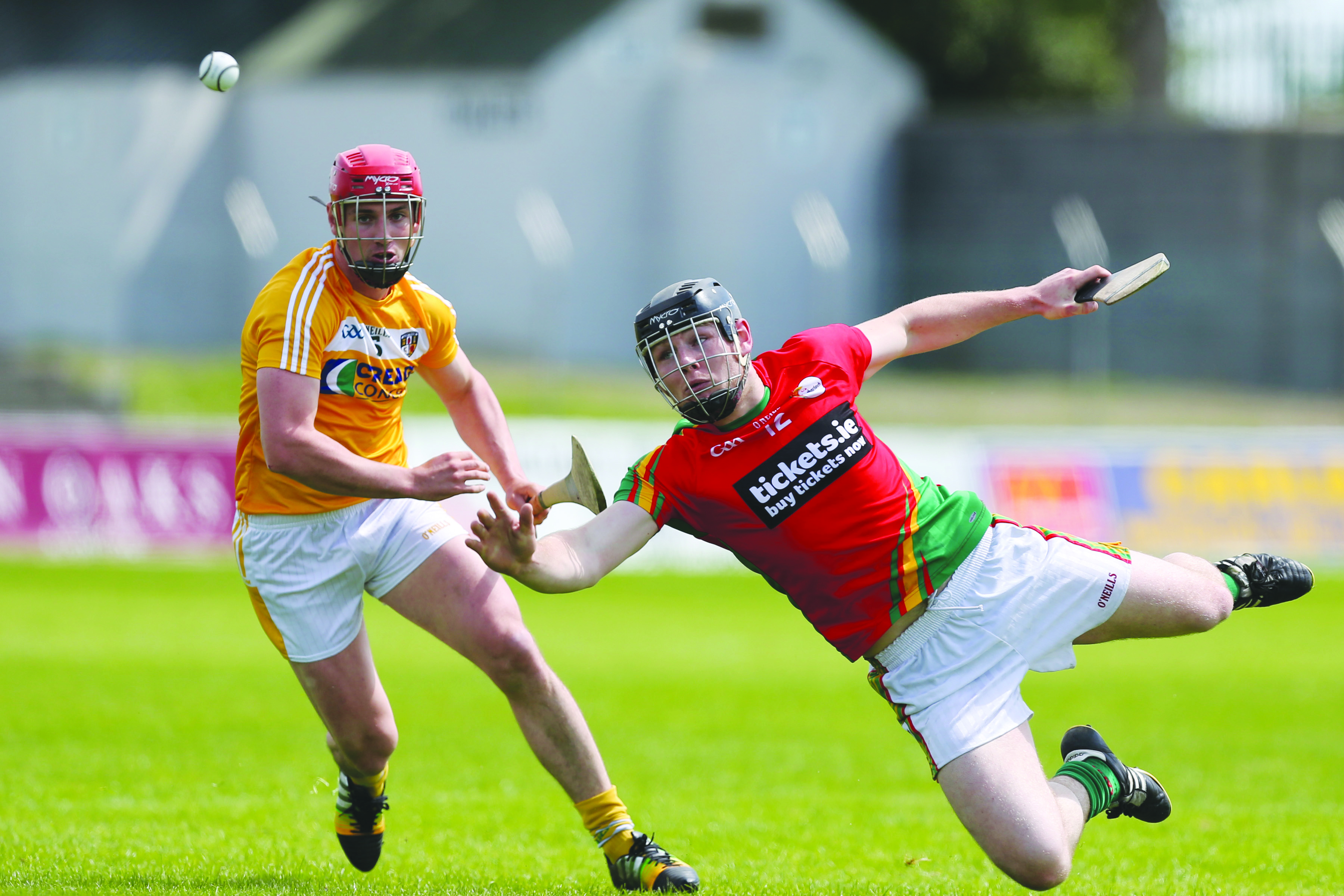 A diving John Michael Nolan of Carlow tries to get his hand to the sliotar ahead of Antrim’s Simon McCrory during Sunday’s Leinster hurling qualifier at Dr Cullen Park, Carlow

THE annus horribilis for Antrim hurling continued on Sunday at Netwatch Cullen Park as they fell to a ten-point defeat to Carlow that means they drop down to the Christy Ring Cup for 2016.

Both sides finished this game with 13 players, with Carlow’s Marty Kavanagh and Edward Coady issued straight reds in either half – Coady’s for a crude challenge on Ryan McCambridge that saw the young Cushendall defender leave the field by ambulance after receiving treatment on the pitch for close to 15 minutes. For Antrim, Ciaran Johnston and Simon McCrory saw red as frustrations boiled over. It was another miserable day for Antrim’s players and the small band of supporters who made the trip south in the hope their side could turn things around and somehow reach a Leinster Senior Hurling Championship quarter-final.

Despite a bright start on a glorious day, it was not to be as Carlow were simply too quick, too slick and too composed for an Antrim side that lost its way after the first ten minutes. The visitors began well but that age-old problem of failing to convert chances was to raise its ugly head yet again. The Saffrons passed up five scoring chances before Paul Shiels converted a 65 on eight minutes that cancelled out a Marty Kavanagh free.

In all, Antrim hit 14 wides and dropped five shots into Carlow goalkeeper Kevin Kehoe’s hand, underlining their inability to make their opportunities count.

Initially, given the dominance Antrim had in the middle third, there were high hopes they would eventually get it together and when Conor Johnston found the net on ten minutes after being set up by a composed Conor McCann to make it 1-2 to 0-1, things seemed rosy for Kevin Ryan’s charges.

Inexplicably, though, they just seemed to stop as Carlow raised their game and Antrim had no response with the forwards in particular losing their shape.

Four scores in as many minutes from the hosts tied the game with Paul Coady, Marty Kavanagh, Edward Byrne and John Michael Nolan all on target, but Carlow were to receive a substantial setback on 21 minutes when Kavanagh was issued a straight red card for appearing to strike Odhran McFadden after the ball had been cleared.

Daniel McKernan was operating as the spare man but Antrim just couldn’t take advantage of this as Carlow continued to take the game to the visitors. Paul Coady took over the free-taking duties and made no mistake from his first opportunity to give his side the lead, while Sean Murphy fired over a delightful point after selling a dummy. Ciaran Clarke finally added to Antrim’s tally after 22 barren minutes with a free, but Carlow were to have the final say of the half with a Coady free to take a 0-8 to 1-3 advantage into the break.

Antrim – who were decimated with injuries going into this game – were forced to replace another two leaders at the break with Paul Shiels and Neal McAuley forced off. Still, they opened the second period brightly although hitting three wides before Ciaran Clarke set up half-time substitute Michael Bradley who fired over from distance. A Coady free cancelled this out but a lovely pass from Ciaran Johnston to younger brother Conor out on the right saw the St John’s man make it a one point game again.

However, Carlow had an answer to every Antrim question and again Coady pointed a free before John Michael Nolan hit a beauty from out on the left sideline. Ciaran Clarke did reduce the gap to two from a free, but the writing was on the wall for Antrim who just couldn’t win any of the breaks as Carlow grew in confidence and completely took over.

Three quick scores made it a five point game before the hosts cemented their dominance when Sean Murphy nipped in to win a ball he had no right to claim and race through the Antrim defence before off-loading to Paul Coady who cracked the ball into the net.

Points from Mark Brennan and Coady followed as a wilting Antrim suddenly trailed by ten and to make matters worse, on 57 minutes Ciaran Johnston was given a straight red following a late challenge on Brennan.

Odhran McFadden did stem the tide with a point for the Saffrons before McCambridge received that nasty injury when Edward Coady stormed into him high with his shoulder and head, a challenge that saw the Antrim man lying prostrate for a lengthy time. Thankfully it emerged his removal to hospital for concussion was only precautionary.

Coady was correctly dismissed and when the game eventually restarted, Ciaran Clarke clipped over a free before Antrim were also reduced to 13 when McCrory was reported for an off-the-ball challenge on Sean Murphy. Antrim did hit three of the next four points to leave six in it by the eleventh minute of injury-time, but Carlow were to have the final say with Jack Kavanagh pointing before Sean Murphy found the net after being teed-up by Ger Coady to seal their win and survival in the MacCarthy Cup while handing Antrim their second relegation of this dismal year.