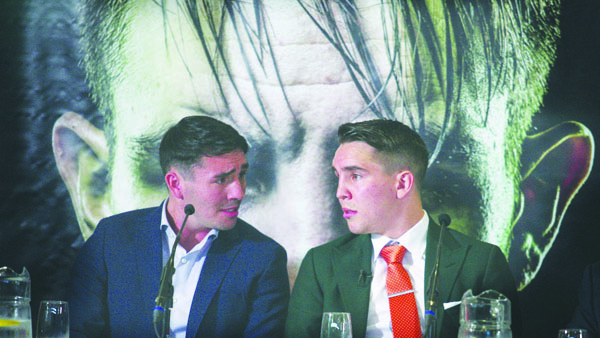 Jamie Conlan says younger brother Michael - who is on the cusp of a world title opportunity - is keen to get back in the ring as soon as possible, but the current restrictions due to Covid-19 make the date and venue impossible to identify

JAMIE Conlan admits that two huge fight nights set for Belfast this summer involving younger brother Michael and Carl Frampton may well end up being located to New York later in the year.

The lock-down due to Covid-19 means that mass gatherings are banned at this time and on Sunday, the Irish Minister for Health Simon Harris admitted they are unlikely to return this year.

That scenario would be expected to be similar in the North and even if restrictions were lifted here, time is against Carl Frampton’s challenge for Jamel Herring’s WBO super-featherweight title fight on June 13. The proposed Féile an Phobail card on August 1 is also a major doubt although Conlan says they have identified later dates when it could be staged, but the longer the current restrictions are in place, outdoor boxing becomes unfeasible.

Conlan - Vice-President of MTK Global that manages a host of local fighters - has been in discussions with promoter Top Rank in order to find a way forward but says New York is looking more likely than Belfast as the venue for both with each passing day.

“We’ve got three different dates for Mick and we’re reviewing that on a weekly basis with Kevin Gamble (from Féile) to see where we are,” he confirmed.

“We have a cut-off point for when we stop looking at a certain date and move onto the next one.

“It’s very hard pre-empting when we can start again but we’re just trying to prepare ourselves so when shows can go again, we’re ready and structured.

“We have a date where we put a nail in it for an outdoor event. With boxing, it gets to a date where the weather won’t be reliable to put it on given all that it entails with a structure having to go up. We do have a cancellation point and different plans in place.

“With Mick, do we stay in Belfast or go to New York? If we can’t do outdoor with Féile, do we just want to go to the Odyssey or what do we want to do?

“There are a few meetings coming up with Top Rank on that, so we’ll go through the different options. With Mick and Carl, they’ve a big enough platform on their own so we need to plan for them.”

It seemed Frampton’s hopes of a return to Windsor Park were about to become a reality for his bid to become a three-weight champion, but the current situation has ended that.

The SSE Arena was also in the running to stage that, but Conlan believes ‘The Jackal’ would prefer to appear at Madison Square Garden towards the end of the year, so long as gatherings in New York are permitted by then.

Top Rank have been discussing the idea of boxing behind closed doors, but Conlan doesn’t believe that would work for Frampton or his brother.

“Carl and Mick wouldn’t be involved in that as it wouldn’t work for us,” he stressed.

“Financially, they generate such high gates, especially on the east coast of America.

“With Frampton, you have to say that Windsor Park in June is definitely off the cards so we’re looking at different venues. I spoke with Madison Square Garden and will continue to do so with them as it’s a possibility.

“Carl’s been and done the Odyssey so many times, and while it would be good to have it at home, the Garden is somewhere he wants to tick off and to do it against Jamel Herring would be unreal. The Garden is very happy we’re even considering to go there, so it’s interesting.

“Carl has a holiday in August he is adamant he wants to take - if it’s possible to go on holiday then - so we’ll have another date a bit later when hopefully the crowds will be back in. Both Belfast and New York are options, but New York looks the frontrunner at the minute.

“Frampton knows that the Herring fight is signed and sealed, so that’s one he is happy to wait for and they’re (Herring’s team) are willing to wait for also.

“With Mick, he wants out in August or September. That’s the same for Sean McComb and a load more, so it’s trying to set the right plan for each fighter but it’s hard because nobody knows when we’ll have boxing.”

Had things fallen in place this year, Michael Conlan could have been fighting for the WBO featherweight title in August as Shakur Stevenson has now vacated to move up a division and with Conlan ranked number one, he was next in line to fight for the strap.

However, his St Patrick’s Day fight against Belmar Preciado fell through due to lock-down in New York and deprived him of the chance for one final outing before the big one.

Jamie says that he and coach Adam Booth believe that Michael is now ready for the title shot, but would prefer one outing later in the year as a warm-up before taking it on.

“I’d like a warm-up but Mick says he’s ready,” he revealed.

“Adam said to me that in his last training camp (leading up to St Patrick’s Day) he felt Michael was right for the world title fight but he wants to see him produce what they were doing in the training camp in the ring.

“He’s very critical as a coach, which I like because he doesn’t blow smoke up a fighter. When he rings and is enthusiastic about the way he was performing in training, in sparring, his mental strength and his attitude to everything it fills me full of confidence.

“I’d like him to get the rust off, have another training camp then a top-rated fighter so that when we go in against (Miguel) Marriaga or any one of those guys, it will be perfect timing.”