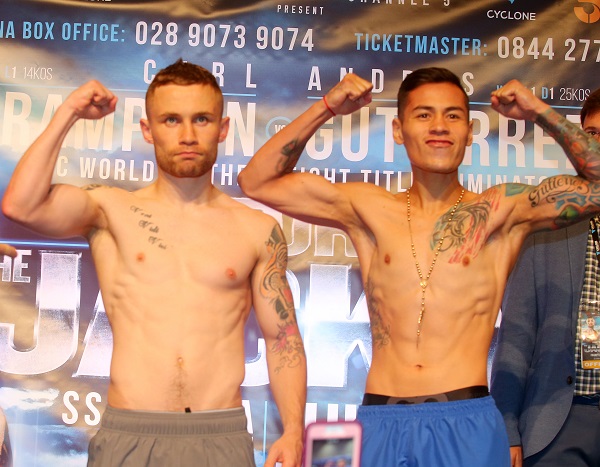 TOMORROW'S headline fight at the SSE Arena will go ahead, but the WBC featherweight title eliminator will apply to Andres Gutierrez only after Carl Frampton scaled one pound over the nine stone limit at today's weigh-in at the Europa Hotel.
'The Jackal' came in at 127lbs with the Mexican registering 125 lbs 9oz which was ironically at odds with the thoughts it would be the visitor who could be tight at the weight.
What this now means is that Frampton is likely to be fined and the status of WBC eliminator applying to Gutierrez only should he upset the odds and score a win.
It is believed that Frampton's overall rankings with the various governing bodies will not be altered.
Frampton has since issued a statement apologising to the fans and his opponent, Gutierrez for the issue.
It read: "After a long training camp of intense preparation and training to make weight, I am disappointed I came in 1lb over the featherweight limit today. I tried everything I could to cut down, but unfortunately, my body just wouldn't allow it in the end.
"I'd like to apologise to the fans who have got involved and shown support throughout this frantic fight week, and to those who will be cheering me onto victory on Saturday night. Furthermore, I would like to apologise to my opponent Andres Gutierrez who will still have the opportunity to win the WBC eliminator on Saturday.
"I'm gutted, but that the same time, I acknowledge that I am responsible. I'm still very much looking forward to returning home tomorrow night in front of the best fans in the world. I'm sure that I will put on an explosive performance and claim victory. Thanks again to the Jackal Army, the turnout today was unbelievable."
Today's weigh-in was all played out in front of a huge crowd in the Europa Hotel's Grand Ballroom who squeezed in to see their hero and the North Belfast man was greeted by a rapturous cheer when he took to the scales in contrast to Gutierrez who received a hostile reception.
The Guadalajara native didn't seem too concerned with the boos however as he grinned out at the crowd prior to Frampton making his way to the scales.
A fairly intense staredown followed, but both men looked to be enjoying the occasion before going their separate ways ahead of tomorrow's showdown at the sold-out SSE Arena.
"I love the atmosphere and love the crowd in Belfast," said Frampton before departing.
"I'm just happy to get going and get on with it now.
"I love this. It's my favourite city in the world, favourite fight city in the world. People love me and I love the people so I want to put on a good performance tomorrow night.
"I just want to put in a performance that shows people I have plenty more to give."