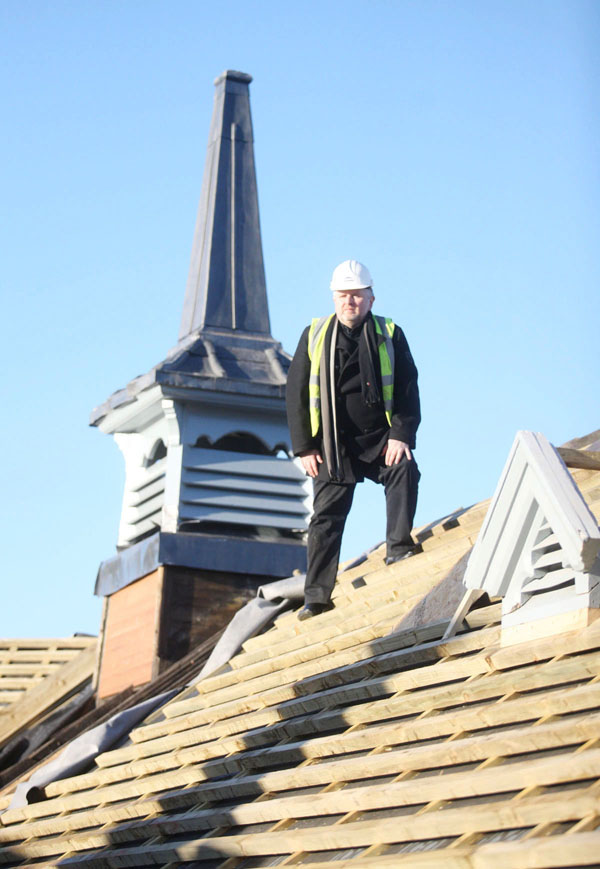 Fr Gary on the roof of the Houben Centre during its refurbishment. It has since been revealed the builders carrying out the work were approached for protection money

BUILDERS working on the Holy Cross Parish Centre have been targeted by extortionists who demanded protection money to allow work to be completed.

The shocking revelation came as much-loved priest Fr Gary Donegan accepted an award on Friday for his work in building community relations from the Community Relations Council.

The Houben Centre was officially opened a year ago and was built on the site of the old national school. Designed to have entrances onto the Woodvale Road as well as the Crumlin Road, it is officially a Holy Cross building but clerics hope to use it to foster relationships across the divide.

The popular centre is also home to the R-City coffee shop, a social enterprise that is jointly run between Ardoyne Youth Club and the Hammer Youth Club.

However, despite its links to the church and wider aim of helping unite the communities a group approached the builders. But Fr Gary said they were told there would be no money handed over.

“When the builders were building this place and they were approached by those who would try to extort them, I went to them and challenged them – ‘you'll not extort it on my watch’,” he said.

“You have to take those kind of risks at the time because of the fact these are the people that try to control our society.

“The day we opened this they started taking down on the walls on the Crumlin Road as well.”

Speaking after receiving his award, Fr Gary declined to specify who it was that approached the builders for money, but he confirmed he met them in person.

The North Belfast News has previously reported that a number of groups operating in the north of the city are active in taking protection payments on building sites.

In February 2015 we revealed that five separate gangs had approached builders working on the Girdwood social housing development.

That came after a bulldozer was burnt out on the Bone Hills site in November 2013 in what was a suspected extortion attempt.

Among the groups looking for money are dissident republicans, however it is unclear whether they were involved in the Houben Centre extortion attempt.