Going cold turkey at the Roddy’s in January 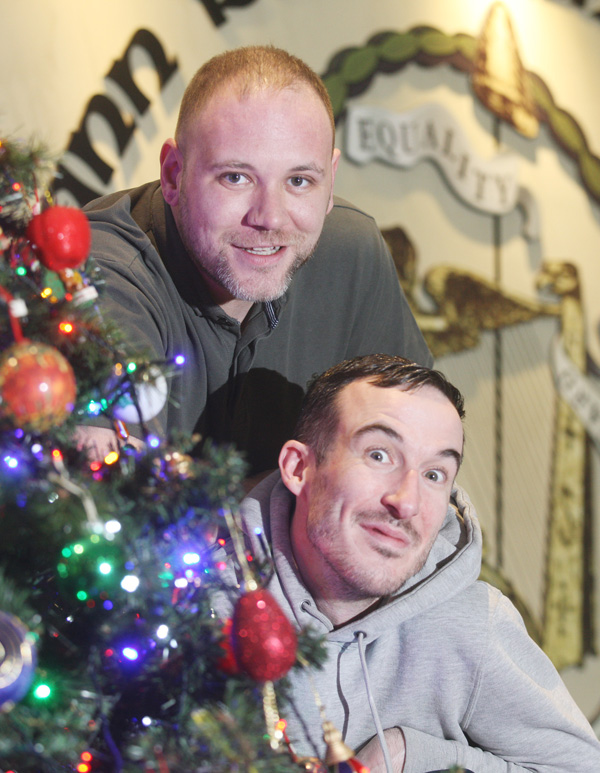 FOLLOWING a sell-out run at the Roddy McCorley’s and The Mac Theatre, the duo behind The Terrible Tragedy of the Twinbrook Turkey will bring their hit show back to its Glen Road haunt for a string of dates in January.
Gerard Jordan and Ciarán Nolan, the comedic partnership behind ’Em Two Balloons Theatre Company, told the Andersonstown News that such was the success of their latest Christmas show that their director Paula McFetridge couldn’t even secure a coveted ticket for the current run.
“The Mac booked us this year which was a huge complement for us,” explained Ciarán, “especially with ’Em Two Balloons as a theatre company only being a year old.
“There hasn’t been a ticket going spare and the success of it really has been overwhelming and we are delighted to be bringing a handful of dates back to the Roddy’s in January.”
Gerard said that all the old faithful characters from their previous Christmas offering will be back to tell even more riotous tales.
Gossips
“Door men Maxi and Feargal are back, Tablets and Mutley and Jean and Joan the local gossips to name but a few and this year we have our beloved organic Twinbrook turkey – who is partial to a bit of Neil Diamond – on stage. We are sure audiences will take to him,” he laughed.
The actors spoke of how reaction to the show has been “fantastic so far and ’Em Two Balloons have plenty in the pipeline for 2018”.
“Em Two Balloons, the company, has acquired the rights to Brassneck Theatre’s Man in the Moon and we are set to perform it come May to tie in with Mental Health Awareness week,” said Ciarán. “It’s a good feather in our cap that we can do this and we will be putting our heads together to write some new material for a brand new show this time next year.
“We couldn’t have done this without the support of the community and also the Roddy’s so we want to say a massive thanks to all who have supported us this year and we will guarantee a show to remember for our audiences come our new dates in 2018.”
Tickets for The Terrible Tragedy of the Twinbrook Turkey which takes place from January 4 to 7 are available from the Roddy McCorley’s and are priced at £10.