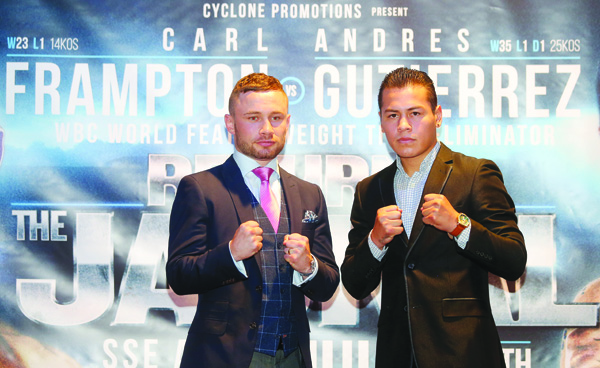 IT'S not the Mexican opposition Carl Frampton was hoping for as he makes his first appearance at home in over two years, but Andres Gutierrez will be the man aiming to silence the Belfast fans at the SSE Arena on July 29.

Frampton had been hoping to lure Leo Santa Cruz over to complete the trilogy between the pair after the Mexican evened the score in Las Vegas back in January, capturing the WBA featherweight title had taken from him in New York last summer, but the Mexican did not play ball and stick to his pre-fight promise to travel across the Atlantic.

Instead, 23 year-old Gutierrez accepted the challenge for this WBC eliminator.

It was expected Frampton’s homecoming bout would take place at Windsor Park, but with the Women’s U19 European Championships being held in the stadium just over a week later, it was not possible for Frampton to fulfil his dream of boxing at the South Belfast venue for now.

“I just want to say I’m really sorry because people will miss out on tickets,” said ‘The Jackal’ at Wednesday’s press conference at the Europa Hotel.

“I desperately wanted this to be in a big area, but it just wasn’t to be this time. I desperately want to fight in Windsor Park at some time in the future. The team is working hard to see if we can erect a big screen somewhere in the city centre for fans to watch. People have travelled to New York, Las Vegas and I ave a big fan-base here, so it’s unfortunate people are going to miss out on tickets, but there’s nothing we can do this time. I can only apologise.”

While it may not be the venue he had hoped for on this occasion, Frampton will feel right back at home at the SSE Arena that had earned the nickname of ‘The Jackal’s Den’ given the raucous atmosphere generated by his fans.

Frampton’s last outing there was his destruction of Chris Avalos in his first defence of the IBF super-bantamweight title in February 2015 before four fights on the road, so he is excited to get back to familiar territory.

“I’m very excited to be boxing at home again. I believe that my best performances are when I box at home,” he added.

“I wanted to fight at home, but I wanted a hard fight. I didn’t want to mug the fans off and go in against a nobody. I wanted a tough fight. I know I’ll need to be at my best and if I’m not at my best, I’ll lose this fight.”

The Guadalajara native has a record of 35-1-1 with his sole defeat a controversial majority decision loss to Cristian Mijares last summer and looked naturally bigger beside the Belfast favourite on Wednesday.

The Mexican and his trainer, Jorge Barrera – brother of ring legend Marco Antonio – were afforded a generous reception by the large crowd at the Europa, but Gutierrez knows it will be much more hostile on July 29 although he seemed unfazed and claims he is ready to take his big opportunity.

“I am ready for this fight,” he declared.

“I know I have lost a fight, but I felt I won that fight. I know I will need to be at my best, but I want to give a good show to everyone. I have been training hard for this opportunity and I want to show that.

“This is a big challenge for me. This is the first time I have been so far away from home for a fight, but this challenge I will give my best. I am going to work hard and I will need to if I want to beat Frampton, but I am going to give you a great fight to watch.”

Frampton’s manager, Barry McGuigan believes this is the perfect opponent for his man to get back in the groove following his disappointment in Las Vegas.

Victory will leave him in a great position with a path to WBC champion, Gary Russell Jnr while fights against IBF champion Lee Selby and of course, Santa Cruz remain real possibilities, but McGuigan warned that Frampton must not look past the big-punching Gutierrez or his hopes of getting his hands on a world title again could fade away.

“We wanted Carl to have a serious test and we certainly have got that in Andres Gutierrez,” said McGuigan.

“This guy is a no-nonsense fighter, an attacking fighter with a tremendous punch. He is just a whirlwind who never leaves you alone. We felt that Carl needed an opponent like that to get him back to his sharp best and we certainly believe that is going to happen. The fans are really going to be excited about this fight because it’s going to be action packed from start to finish.

“Nobody wants to fight Andres Gutierrez. He beat Cristian Mijares, but didn’t get the decision so for us he is unbeaten. He’s a big, strong attacking fighter and we will see Carl at his best.”

McGuigan admitted that matching Frampton was difficult given his status as one of the world’s elite fighters with opponents especially reluctant to travel to Belfast.

Santa Cruz has agreed to a rematch with Abner Mares in September, ruling both out for Frampton, while Selby is obliged to face his mandatory challenger, Jhonny Barros.

“Nobody wants to fight him because he is one of the best fighters in the world,” explained McGuigan.

“He lost marginally to Leo Santa Cruz, but he is still one of the elite pound-for-pound fighters in the world so we need to keep him busy.

“He said he wanted to come back to Belfast and we have honoured that. We are here, but you never know, this might be the last time you see him in Belfast because of the nature of these fights now and the money that needs to be generated to put them on.

“We have three months in the summer if we’re lucky to have good weather, so most of these fights need to be in arenas that have the capacity to take 15 or 20 thousand people. Unfortunately we don’t have that on this island. We do have that in the UK, so the Santa Cruz fight, all being well on the 29th could happen in Glasgow, Manchester or London.”

Regardless, Belfast will once again be in the grip of Frampton fever come the end of July with tickets, as anticipated, snapped up in double quick time when they went on sale at 10am this morning (Thursday).

“The whole buzz around the city on fight week is great,” said the North Belfast man.

“There’s just something special about Belfast. It’s a proper fight city, the best in the world. My last four fights have been away from home. The Quigg fight needed a big arena, I went to Texas and then I had the two fights with Santa Cruz, but I have desperately wanted to get back home, so I’m just glad I’m here.”

He repeated his disappointment that Leo Santa Cruz didn’t stick to the promise made in Belfast at a press conference last year to fight in the city, but for now ‘El Terremoto’ is out of his gaze as he focusses on the job at hand in Gutierrez.

“Initially after he (Santa Cruz) beat me, what he was saying before the fight about coming (to Belfast) definitely changed quickly,” noted the 30 year-old.

“I understand why he didn’t come. He has just won the title. The money he gets paid in the States means it needs to be a pay-per-view show (here) and there wasn’t a pay-per-view date available this summer.

“I’m disappointed he didn’t come, but it’s one each between us so I think that fight will happen again at some point, but I need to get by Andres Gutierrez fight and that’s a really difficult fight. I’m completely focussed on one man and that’s not Leo Santa Cruz.”

Carl Frampton paid tribute to his old training partner, Ryan Burnett who claimed the IBF bantamweight title at the weekend with his points win over Lee Haskins.

‘The Jackal’ said he was impressed with how his fellow North Belfast man dealt with the occasion on Saturday night plus ignoring the nasty gash on his forehead in the second round to power on and claim the title he craved.

“A lot of things happened in that fight he had to deal with. The cut was a nasty one, but the corner did a great job.

“A lot of fighters might have flopped in that situation. He stuck to the game plan. I found it difficulty to give Lee Haskins any rounds. I thought it was a shut out, but Haskins deserves credit for staying in there with that injury.

“I’m happy for Ryan. I know him quite well and know how much he wanted that so fair play to him and his dad because I know how close they are.”