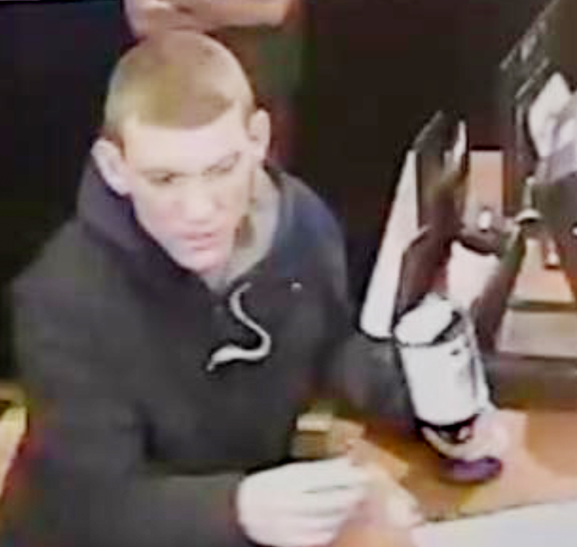 THE owner of a North Belfast restaurant and takeaway says he’s outraged after a donation box for a birth defects charity was stolen from the premises.

It’s estimated £30 to £50 was in the box which was taken on Sunday night at around 9.15pm by a man from Pizza Works on the Antrim Road.

The box belonged to the Association for Spina Bifida and Hydrocephalus (Belfast and District), which supports people living with the conditions.

Business owner Eoin Scollay, who released CCTV images of the theft, is appealing to the public for information to help identify the guilty. The man who took the box was accompanied by another individal.

“The younger fella came into the shop and ordered a pizza,” said Eoin. “He hung around at the counter sometimes leaning right over to look on the other side,” he explained. “The staff were busy but suspicious of the guy. He eventually sat back down and the other guy who was outside opens the door and shouts in threatening the other fella, making a scene, before being asked to leave my staff.

“He then continued to gesture through the window and shout. The staff then finished the younger fella’s order before handing it out.”

“When I noticed the charity box was missing, I checked the CCTV and it explained everything.

“The younger fella, after ordering his pizza, looked at the box and had a wee shake of it to make sure there was money in it. He attempted to lift it a couple of times before slipping it up his jacket and sitting down again.

“There is normally around £30 to £50 in the charity box, which isn’t much, but every little helps charity,” he added.

Eoin said he has been left shocked and outraged by the incident and has appealed to the local North Belfast community for help.

“My reaction was of complete shock and outrage. I’m extremely disappointed that someone could stoop so low as to steal from people who are truly in need. It would be bad enough if they stole from us, but stealing from a charity is hard to comprehend.

“We we will not let the charity suffer as a result and we as a business will fully cover what was stolen.

“I think these are two well-known individuals but we need the community to help us identify the two suspects, so we can pass on the information to the police. It can only be described as a low and disgraceful act.”