Healy avenges past loss to get on title track 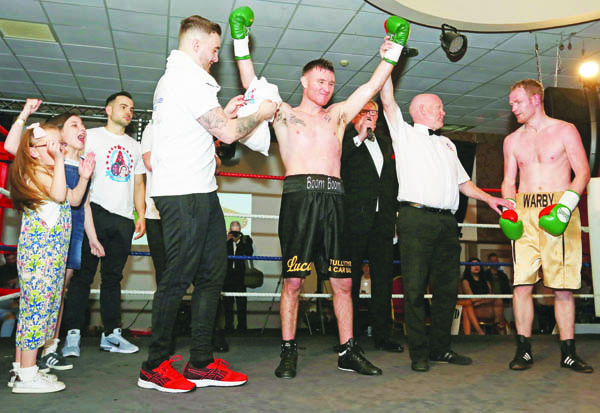 THE dream of winning the Irish title before hanging up the gloves at the end of this year remains on course for Gerard Healy following his win over William Warburton on Saturday.

‘Boom Boom’ had previously lost out to the Englishman who was taking part in his 143rd professional contest at the weekend and has had previous for making life more than awkward for opponents and even scoring some big wins, but this time Healy ensured there would be no upset as he boxed brilliantly over the four rounds to take the win and extend his record to 6-4-1.

“I was watching the (Anthony) Crolla undercard (Linares rematch) and Marcus Morrison lost to Jason Welborn who had lost to William Warburton in his last fight.

“I had to get all of these doubts out of my head and with Ray and Dee they have done that so I put on a great performance tonight. That’s Gerard Healy back. I’m coming for that Irish title, it’s my turn.”

Based on his display on Saturday, Healy does have legitimate reason to call for an Irish title shot before long as he showed a whole new side to his game to frustrate and out-box Warburton throughout.

From the opening bell, Healy was on the front foot and stayed busy to score, cornering the visitor towards the end of the round and unleashing a combination.

The second saw him switch hit, starting southpaw before switching to orthodox and back, a tactic that left Warburton playing catch up as he tried to get to grips with Healy and was sent stumbling into the corner from a jab to the chest.

In the third round, Warburton took a left hook and while slightly off balance, he still appeared to touch down and hun onto the ropes to keep himself semi-upright although somehow no count was issued.

This was not to matter as Healy danced back into the corner at the end of the round and simply controlled the final stanza to take the 40-36 points win.

“William has had some big wins, so it was no easy task,” he agreed after.

“Me and Ray (Ginley) sat down, talked about it and I said I was going to start well.

“We had been training from before Christmas for a fight and thank God, Kieran (Farrell, promoter) came over and signed a load of boys.

“They are my closest friends so I’m just really comfortable at the minute. It’s great.

“I never thought I would have come back, but Ray talked me into it and I’m really happy.

“Hopefully I can get that Irish title shot. Everyone else has had their turn so I think it’s time for me to get my shot either at middle or light-middle.”

MEANWHILE, another man making his ring return after two years on Saturday was Matthew Fitzsimons who was another home points winner.

The tall, super-featherweight controlled all four rounds against a tricky opponent in Michael Barnor to move to 3-0 and set up what he hopes is a busy year ahead.

“It’s great to be back after a big layoff and put on a great performance,” he said after.

“I thought I controlled the fight there.”

It was hard to argue as Fitzsimons employed his considerable reach advantage to keep Barnor out of range and any time the Ghanian did get into range, he was being countered well as Fitzsimons showed patience in his work.

It didn’t appear a stoppage was on the cards with Barnor able to use his experience to stay out of real danger, but he was making no impression in attack with Fitzsimons happy to step back and land his jab to coast home and get his career back on track.

“The plan this year is to just have more fights,” he explained.

“In two years I want to be challenging for titles.

“I think I would be a handful for any super-featherweight and I’m only 20 now. Imagine me in five years’ time, nobody would beat me.

“I’m still young so I have a long path ahead. “I was a completely different fighter in there tonight and that’s to do with Dee and Ray teaching me every day in the gym.”

One interested observer at ringside was Daniel McShane who is planning his own comeback after two years out and McShane said he would love an all-West Belfast showdown with Fitzsimons this year, a challenge that was accepted in principle by Saturday’s victor.

“I don’t think he can make nine stone four, maybe ten stone,” he responded when informed of McShane’s challenge.

“If he wants it then great, why would I dodge him? It would be a good fight and we could probably get it for longer rounds and an Irish title which would be perfect. I would take that fight no problem, no problem at all.”