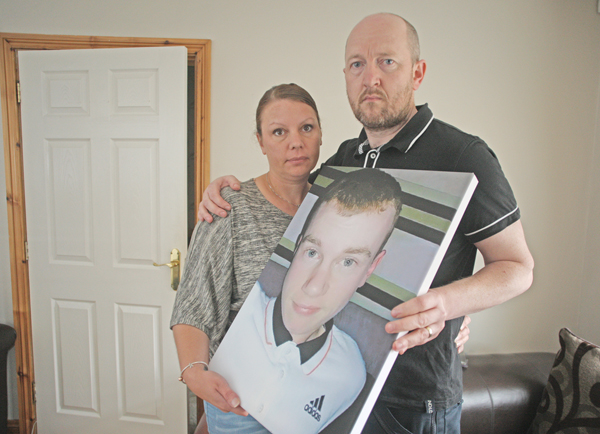 THE parents of a Ligoniel schoolboy who took his own life after bravely battling a drug addiction say they will honour his legacy by campaigning for a secure unit for teens suffering from addiction and mental health problems.

Paul and Sarah Fox’s son Aaron passed away in April this year aged just 16. The St Malachy’s pupil was preparing for his GCSE’s having successfully beaten a legal high habit that saw him transform from a confident intelligent teen into someone who, on a number of occasions, slept rough so he could continue to take the drugs.

However, the toll of coming off the drugs had a detrimental affect on his mental health. Sarah and Paul believe this could have been managed if a dedicated mental health facility for teens – something England, Scotland, Wales and the Republic of Ireland all have in place.

“After coming off the drugs his mental health had deteriorated too much,” said Sarah. “If there had have been a secure unit here, like we asked for, and proper provisions in that secure unit to deal with addiction and the rest of it, we probably would still have our son here.

“We were told numerous times that had we lived in any other region of the UK or down south, there would have been something there for him. That’s not good enough. That’s not fair. Our kids deserve the same mental health provision as everybody else.”

Sarah said his descent into drug taking was rapid and left the family struggling to cope.

“It was so fast. It was just unbelievable how quick it gets hold of these kids.”

An attempt by the family to keep him away from the dealers who were supplying him became more and more difficult.

“Aaron escaped from home one Saturday last year and he was knocked down by a bus because he was that far gone with the drugs. The bus was only taking off but he was knocked on top of a car. A policeman phoned my husband and said he’d arrested him for jaywalking. He said he had never had to arrest someone for that before but he knew if he let Aaron go and walked round the next corner he could have been killed by another bus.

“That rung alarm bells and we started crying out to get him into a secure unit. He was a flight risk, he was running away all the time.”

Paul says this behaviour brought on by the addiction was shocking to watch.

“Our son was spotless. He loved his home comforts but he ended up sleeping in alleyways and woods.”

Through the help of organisations like PIPS and FASA and being treated as an inpatient at the Beechcroft Child and Adolescent In-Patient Unit in south Belfast, Aaron was able to beat his habit and the last weeks of his life were spent working on his GCSE Art coursework he wanted to use to warn others about the dangers of addiction.

Paul says it is imperative a dedicated residential unit that deals with both mental health and addiction is established to save people like Aaron. He says what he has seen with his own eyes suggests the impact of legal highs is so severe demand will continue to increase.