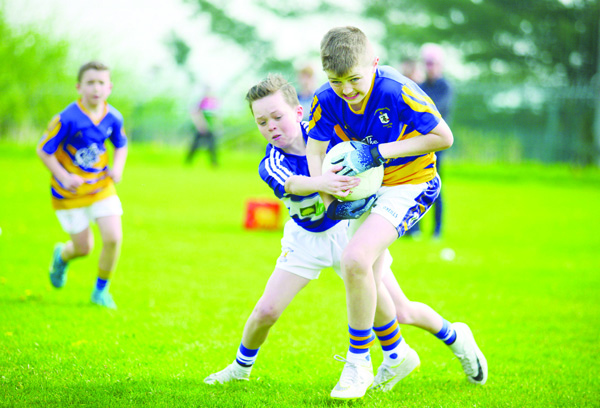 While the Joe Cahill U12 Football Tournament – traditionally held over Easter weekend – could not take place this year, there is still the possibility for young players to sharpen their skills from home

A SUNNY Easter weekend would usually be the cue for a hive of activity on the sporting fields of Ireland, but as we know all too well, this year offers anything but.

Easter Saturday would ordinarily see clubs from across the city compete for the U12 Joe Cahill Memorial Football Tournament at MacRory Park, but sadly that was not the case.

While group activity including training sessions and games are off the table for now, that’s not to say the hurleys and footballs have been consigned to the shed.

Across social media, we have been watching as players from club to county level engage in various skills challenges and tests, helping to sharpen skills and offer a unique form of competition that couldn’t have been envisaged a couple of months back. In an age when the games console and table is king, the ‘Playstation Generation’ appears to be getting back to basics a little with the opportunity to get some fresh air in the midst of lock-down resulting in many taking the chance to use their back garden or house wall as a tool to assist in keeping active.

Top hurlers such a Kilkenny’s TJ Reid or footballers like Dublin’s Ciarán Kilkenny using Twitter and Facebook to encourage young players to practice their skills from home, while Antrim players haven’t been found wanting in that regard.

The lock-down has put the brakes on the Gaelfast initiative to some extent, but certainly not fully as various training programmes had been previously devised in preparation for these rainiest of days. Hurling, camogie, football and handball are all covered with skills programmes tailored for various age ranges, with tests and challenges at the end set to help set targets interspersed with physical activities, so when we do emerge from this period, young players will have developed to an extent.

“There is always the fear that we will end up with a ‘gaming’ generation and there is always the chance that will happen - especially with teenagers who may not think it’s cool to be out in the garden,” said coach, Antoin McCaffrey.

“There are still things they can do, like doing skills tests with two footballs: handpassing them both off the wall or kicking both off the wall; soloing with both at the same time over 30 seconds or things like that. That is pretty challenging for kids and even adults who will also find that challenging.

“I think from a coaching perspective, you could end up with a lot more kids whose skills may have got better so we have to give them that incentive. It’s just about thinking outside the box at the minute and being creative. For example, I would set up goals for me and my young daughter and would put some of her dolls on my goal so whenever she hits the target, she wins one back and that seems to keep her interested. It’s a bit of craic and seems to keep them interested.”

McCaffrey acknowledges that upskilling from home presents a huge challenge, so it is certainly not a one-size-fits-all approach that’s needed. Young players in the mid-teens will be a little further down the line in terms of development, so their programmes will be different to those still at the ‘Fundamental’ stage.

“The home activity packs gives kids a few challenges to do - that’s one aspect of it, but there are plenty of other things they can do as well,” he continued.

“For the young ones, from U6 through to U12 it’s just about having a ball and doing something with that - whether it’s how many you can do out of 30, how many goals you can get, how many attempts and things like that.

“They are skill-specific, but what we also have in the activity packs is a physical literacy page where for U6s it may be just small physical things they can do in the home. With the very young kids, there’s only so much of one thing you can get them to do before they may get bored, so it’s about trying to mix it up. The things we’d do with the kids in the schools, they are able to go away and do them in the home as well rather than only being able to do them with us.”

The St Gall’s clubman agrees that young people seeing top players like Reid, Kilkenny and Antrim’s stars posting skills or workout videos online will help them to also get on board. Seeing these players can shed the stigma of being ‘uncool’ to peers and help young players put this downtime to good use.

“You do see players who are coming out with different things at the minute,” McCaffrey noted.

“TJ Reid is doing his thing on Facebook and fair play to him, he could easily have made a bit of money off it but he isn’t.

“One of my own friends has given out a free six-week programme for parents, so you’re seeing a load of different people doing good things, so you just have to look in the right place.

“With skills tests, if they’re enjoying it then they’ll want to do it again and again. If they go on the iPad or a games console and feel they are good at that, they’ll keep doing it. For parents, the trick is to not make the tasks too hard because they will be less likely to keep at it.”

Amid this utterly putrid situation we find ourselves in, the mood of optimism is that the world may change for the better once we return to what is considered normal. That extends to the hurling, camogie and football fields as-well-as the handball courts as amid this crisis, good can emerge.

McCaffrey is longing for the day when the barriers come back down and those empty fields will be filled with renewed vigour and perhaps next Easter’s Joe Cahill Tournament will see an even greater standard of play. Rivalries will remain, but the family unit can become stronger as a result.

“The first thing we’d like to do when we can get back out is to give the kids games - not so much for us wanting to see their skill levels, but just to let them get back out and playing. If they have been doing all the activities and working on their skills most days, then the training to game ratio will be way out, so getting those games and letting them enjoy it again will be massive.

“It’s also about feeling part of the group as the GAA is all about community.”