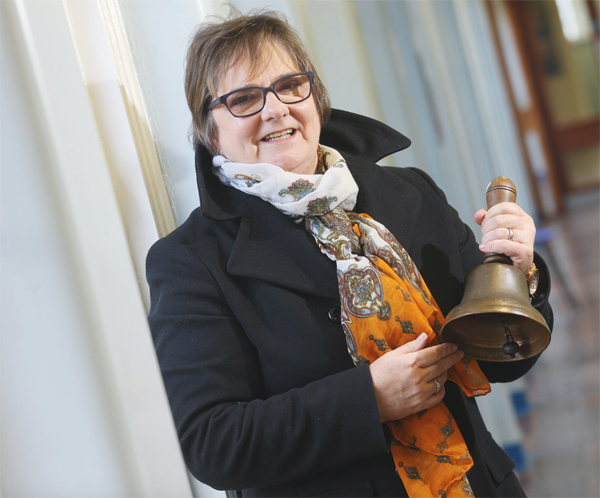 Integrated education is a thorny subject in the north. Yes, everyone will say they are for it but the sector has been slow to take off and recent disclosures showing the religious make up of some establishments being heavily weighted towards one section of the community despite having integrated status have called into question its impact.

Cliftonville Integrated School is not a school that pays lip service to integration. That much is clear when retiring principal Brenda McMullen outlines whey they are one of the most successful of all the integrated schools across the north.

As recently as 2008 Cliftonville was a state school with a dwindling roll down to 180 pupils. Less than a decade on and they have 360 pupils and Brenda puts that down to going integrated.

This success attracts many visitors to check out what they are doing right but Brenda says it is really down to hard work.

She is going to hand over to a new principal at the end of June but says she believes the school is well placed to continue to grow.

“I’m 17 years in this school which until 2008 was Cliftonville Primary School – a predominantly Protestant school with a handful of Catholic children.

“Around that time the board of governors realised there were a lot of Catholic children who live in this locality and a lot of other nationalities moving into North Belfast so they felt that the school did not reflect the community. It was that that led them to decide to go for integrated status and that was granted in 2009.”

Some schools faced opposition to integrated proposals but Brenda says they were able to complete the transition smoothly.

“People had concerns but there was nobody really opposed at all and now we would be roughly 40 per cent Catholic, 30 percent Protestant and 30 per cent other who don’t claim any religion.”

For Brenda, it has surpassed all her expectations.

“I would say it’s the best thing I have done in my entire career. I wouldn’t have thought it would have been such a success and such a joy.

“It’s brilliant to have children from different religions and different nationalities. We notice when the children play together and they have a dispute, since we became integrated I don’t recall any sectarianism amongst the children or their parents.

“I knew it would be a good thing to do but I’d really no idea that it would be such an amazing thing to do and it’s meant we have been in touch with lots of foreign visitors that would never had met. A lot of people are interested in the school and come and visit which has been a really great experience.”

Making a success of a school that moves into the integrated sector takes a lot more work that putting up a sign and expecting the community to come along says Brenda.

“We put a lot of work into what integration means and it’s ongoing work. We do a lot of work though school assemblies and in individual classes on an acceptance of diversity.

“If difference is opposed in any way we talk to children immediately about that. Pastoral care has always been a priority for us.”

Leaving the school in a state of expansion is something that fills Brenda with a great deal of pride.

“Whoever takes my job is taking over a growing school. The growth has been exponential and at one point we were one of the fastest growing schools in Belfast. People are voting with their feet.”

If the school is thriving Brenda says the current demands on principals make it more and more difficult to do their jobs. Reflecting on her career, she says the authorities are moving away from best practice to a system of bureaucracy that benefits neither teacher nor pupil.

“What I will least miss is the unnecessary bureaucracy. There’s no need for a lot of it. Ticking boxes doesn’t really achieve an awful lot and the best primary education systems in the world don’t have strenuous measuring results approach. There’s an obsession with results and quite often unless children are content and feel safe in school and are happy they can’t focus.”

Another bugbear for teachers is the lack of support for young people with special needs – something Brenda says threatens to harm children’s learning.

“I do really seriously believe there’s a crisis in education at the moment regarding children with special needs.

“Children who require extra help or have moderate learning difficulties are put into the mainstream. Special schools seem to be full up and these children are sitting in mainstream education whenever they are not making a lot of progress because of lack of provision for them and their needs.

“This takes up a lot of teachers time but our teachers and classroom assistants are very competent and go out of their way to help. They are very caring.”

Graduating in 1980 and having spells of working in Australia and as a maths specialist for the board, Kilkeel woman Brenda, 59, says she wasn’t surprised to have ended up on the Cliftonville.

“I graduated in 1980 but interestingly in 1977 I was at Stranmillis and this was the first school I was sent to for teaching practice.

“I have a long association with this school. I was then on secondment in the 1990s for primary maths and I had to go round various schools and this was one of the schools I came to offer some help. Then the principal’s job came up and I applied for it.”

Brenda’s retirement plans will involve a lot of travel and she says she is looking forward to helping out with the Integrated Education Fund to try and promote the sector. She says she will miss North Belfast.

“I really think I was meant for north Belfast. I’m from Kilkeel but I really like this area and being here. The craic in North Belfast is second to none and I love the children. There is a lot of local people on our staff and you can’t beat them.”