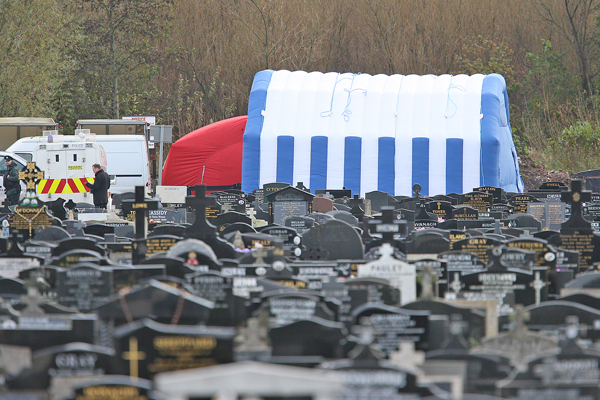 Investigators moved into Milltown Cemetery today (Monday) to exhume the remains of 18-year-old Daniel Rooney who was shot dead by the British army in 1972.

The order for the exhumation was granted by the Coroner and is being carried out after a new inquest into the teenager’s death was ordered by the Attorney General in September 2014.

Daniel died as a result of injuries he received after being shot by members of the Military Reaction Force (MRF), an undercover British Army unit. He was fatally wounded as he stood talking to his friend, Brendan Brennan, at St James’ Road in West Belfast on September 26, 1972.

Medical files from the time suggest that one of the bullets that killed him was unaccounted for and may be recoverable.

The PSNI also initiated an investigation into this matter after a request in November 2013 by Director of Public Prosecutions, Barra McGrory QC, in the wake of a Panorama documentary into the activities of the MRF.

Pádraig Ó Muirigh, solicitor for the Rooney family, said the action was necessary to get justice for the family.

“The exhumation of Daniel Rooney, whilst distressing for the Rooney family, is a necessary step to be taken due to the flawed original investigation of his death by the RUC,” he said.

“For reasons unknown there was no post-mortem carried out after Daniel’s death. However, there is a medical report on his admission to hospital noting Daniel’s injuries and discloses that there was a bullet wound with an entry wound and no corresponding exit wound. This means there is a possibility that a bullet remained inside Daniel’s body when he was buried. If such a bullet exists it could be an important piece of evidence in this case which could assist the forthcoming inquest and police investigation.

“The Rooney family have also engaged an independent forensic anthropologist to attend the exhumation.”

Appealing for privacy, a spokesperson for the family welcomed the developments.

“The extended family of Daniel are aware of the order to exhume made by the Coroner in relation to the remains of Daniel.

“Whilst the family are distressed by this development, as it disturbs the burial ground of the whole family, we understand the Coroner’s reasons for granting the order and that it may assist the pursuit of the truth of what happened to our innocent brother Daniel back in September 1972.