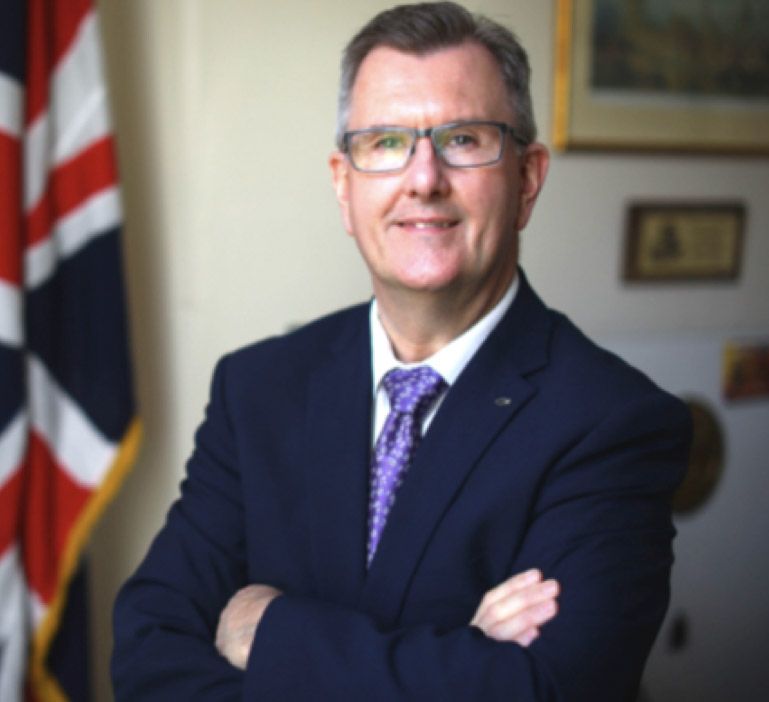 DUBLIN VISIT: Sir Jeffrey Donaldson has taken the reins of the DUP at a tough time for the party

A PARTY or government must be able to walk and chew gum at the same time; that is, it must have a firm grip on domestic affairs, and it must have thought through its ideas on external affairs.

Micheál Martin had two visits last week which highlighted the need for mastery of both areas. How did he do?

Well, the first visitor was Emmanuel Macron. Micheál’s aides and PR people will have briefed him. “No, Taoiseach, don’t call him Macroom. He’s French so it’s more Macrong than Macroom. And his first name is Emmanuel, which means ‘God is with us’, but that doesn’t make him some class of deity, so avoid that excited-rabbit-nibbling-lettuce look you sometimes project in the presence of big-shots.”

What was the European demigod doing visiting Micheál? Well, the Protocol will for sure have been mentioned. Macron will have told Micheál: “The Protocol stays, and anyone who thinks otherwise, send them to us.” That disposed of, discussion will have moved on to the south’s 12.5 per cent corporation tax. Macron will have told Micheál that the days of such indulgence are gone: the EU is looking for a tax level of at least 15 per cent across the board.

Micheál will have burbled a faint protest, but it won’t matter – the days of Dublin refusing billions in Apple back taxes are gone, gone, gone. The EU will stick fast with the Protocol arrangements that keep the Irish border in the Irish Sea,  and Micheál will have to find a way to nudge Irish corporation tax to 15 per cent or more. The EU has spoken; Micheál will do as he’s told.

Micheál’s second visitor last week had something of the deity about him too, although the DUP’s latest leader,  Jeffrey Donaldson, usually confines his divine links to a small fish symbol on his lapel.  Jeffrey was down in Dublin to beg Micheál to support the DUP in their claim that the Protocol is unworkable.

Why should he? Because if he doesn’t, Jeffrey will stop being Mr Nice Guy and will pull Stormont down. This would have the added benefit of preventing Michelle O’Neill from becoming First Minister.

But is Jeffrey serious? Would he really rather have no Stormont than one containing a Sinn Féin First Minister?  You bet your life he would. With opinion polls the way they are, next May’s election will be at the bottom of the DUP’s centenary wish-list. The one alternative for Jeffrey is to learn from Kabul. With ISIS intent on slaughtering every Westerner it can find, the Taliban are beginning to look moderate. Everything is relative, and politicians are going to look from the Taliban to ISIS, and realise that, comparatively speaking, the Taliban aren’t, amazingly, the worst.

Ditto with the DUP. Sent forth originally as red-hot zealots by Bible-thundering Ian Paisley, the party still has a whiff of brimstone when placed beside Doug Beattie’s UUP.  But place them alongside Jim Allister’s TUV, and the DUP starts looking  kinda reasonable.

The DUP and the Taliban – an outrageous comparison? Think about it. Both parties have firm views on a woman’s place: they may not say so out loud, but both believe a woman’s place is at home, cooking meals and looking after the childer. Remember the mooing sounds the DUP used make when someone from the Women’s Coalition rose to speak? Remember Edwin Poots’s suggestion that Arlene Foster’s first commitment would be, or certainly should be, her domestic nest?

A final irony. Doug Beattie, who leads the UUP, did three soldiering stints in Afghanistan. Jeffrey Donaldson, in contrast is a peace-loving Christian whose military experience starts and ends with the UDR. Yet it’s Beattie’s party  – the UUP – that is looking mild and moderate, and benefiting from the implosion of the DUP.

What did Bob Dylan sing? “Clowns to the left of me, jokers to the right/Here I am/Stuck in the middle with you.”
These are dark days for the DUP.