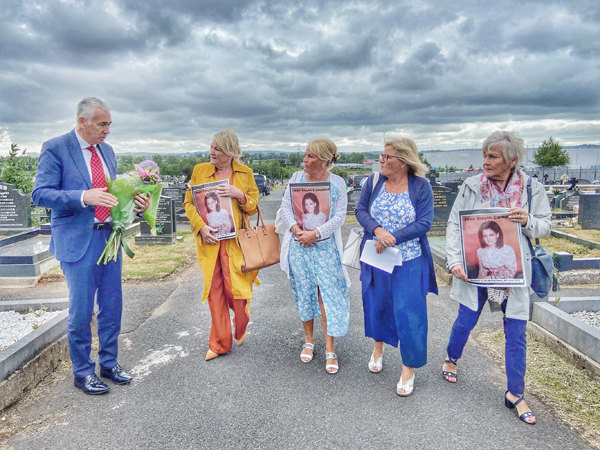 The family of West Belfast woman Jean Smyth-Campbell have urged witnesses to her death to come forward 48 years after she was shot dead. The 24-year-old mother-of-one was fatally wounded on the Glen Road around 11.40pm on June 8 1972 after a night out with friends. The family believed for several years that the IRA was behind the shooting, however documents discovered by Paper Trail’s Ciarán MacAirt, revealed that the British army’s Military Reaction Force (MRF) fired shots in the area the night the young woman was killed.

In March 2017, the family won a significant Judicial Review in the High Court in Belfast. It was ruled that the PSNI were not independent in respect of legacy cases and could not be involved in the new investigation into the murder.

A new examination of the case is being conducted by Jon Boutcher, the former chief constable of Bedfordshire, after the family won a court case last year.

Jean’s youngest sister, Margaret McQuillan appealed for anyone with information on the events of that night to come forward to the family’s legal representation. “Jean went out for a drink on that night and never came home. She came home in a box. The whole family has been traumatised and we still are. We cannot rest while we have so many unanswered questions. For years my Mammy used to stand at the window, waiting for Jean to come home. She and my dad both went to the grave not knowing the truth of who was responsible for her death.”

“It feels as thought we have been living a lie for more than 40 years and have fought hard to get the investigation independently reviewed so we can establish the truth of what happened,” she said. “But we need people to come forward and tell the team what they know. Back then it was not uncommon for people to come out after a shooting. As far as I’m aware there was a lot of people who went to the car when Jean was shot. It maybe that you’ve never come forward or spoken to the police about what you saw that night, but please help us find out what happened on the night she was taken away from us.”

Jon Boutcher specifically called for a young red-haired girl who helped Jean at the scene on the Glen Road to come forward.

The family’s solicitor Niall O’Murchú said anymore with information should contact him. “Today is the 48th anniversary of Jean’s murder. The family are appealing for people in the area to come forward to assist. It is believed, and indeed evidenced in the British Archives, that residents of Bunbeg Park in West Belfast came out of their houses in response to the shooting and may have witnessed or helped armed soldiers who moved Jean’s body into a taxi so she could be taken to hospital.”

Anyone with information should contact Niall Ó Murchú of Kinnear and Co Solicitors on 02890 719171 or email niall@kinnearandco.com