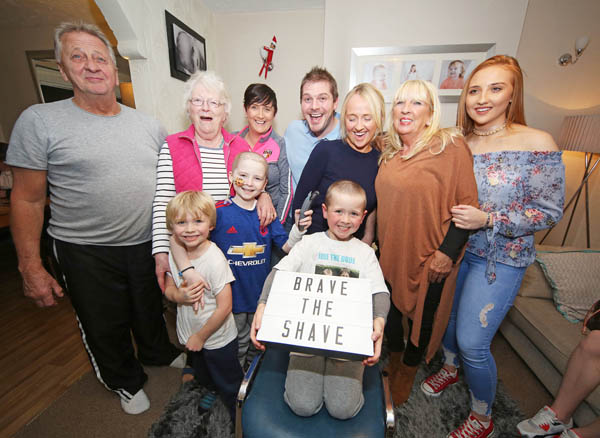 A SEVEN year-old boy from Glengormley has ‘braved the shave’ in aid of his older brother, who suffers from a rare form of leukemia.

Eight-year old Reece Magill was diagnosed with the disease in May and brother Jude was determined to do something for his beloved brother. A total of £400 was raised for the Children's Cancer Unit Charity after young Jude braved the shave for Reece.

Mum Jolene told the North Belfast News it has been a horrendous time for all the family since Reece was diagnosed on April 25.

“Reece took a rare reaction to chemotherapy and ended up in intensive care on May 29, before he was put into an induced coma on May 31,” she explained. “His lungs collapsed and he took pancreatitis. He was critical for around 19 days.

“Reece spent five and a half months in rehabilitation unit in order to try and get his strength up and is still receiving chemotherapy every other week. It’s been such a tough journey. It has been horrendous. I have cried so much I could fill a river.

“He wasn’t well enough to make his First Communion. It hasn’t been an easy year for us all. His life is going to be on hold for the next three years at least until we hopefully get the all clear. We are hoping that he will be able to go back to school early next year.”

Jolene admits she was surprised when Jude first mentioned doing a ‘brave the shave’ but he told her he was adamant about doing something for his brother.

“Reece didn’t want him to do it and said people make fun out of you with a shaved head. I assume he must have heard of it on the radio or something.

“Jude looks up to Reece so much, even though he is younger than him. I think he sort of misses him as a normal brother because he can’t play with him or do things with him.

“The Children's Cancer Unit Charity is such an important charity and we wanted to donate the money raised to them to thank everyone who has helped us.

“It’s impossible to give back to people who effectively saved my son’s life. Raising money for the hospital’s children’s cancer charity was the least we could do,” she added.