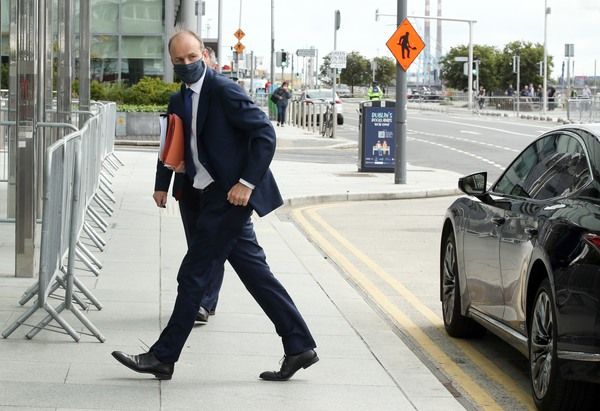 IF you were to draw a graph of Micheál Martin’s voice, it would be very spikey. Micheál talks quickly and in sudden bursts, so that the listener has to gallop to keep up with him. In contrast, a graph of  the good knight Jeffrey Donaldson’s voice would consist of gentle loops, rarely going in for the excited gasp, almost always producing a moderated, controlled pace. But though they may talk differently, there are interesting parallels between the two men.

Micheál Martin has experienced none of this Lanigan’s ball stuff – or at least not so obviously. In 2011 he resigned as Foreign Minister in protest at the performance of his  Fianna Fáil party leader,  Brian Cowen.  When Cowen resigned as Taoiseach, Micheál replaced him; but later in 2011 Micheál led Fianna Fáil to a disastrous defeat in the general election. Showing great generosity, his party forgave him, making Cowen the scapegoat for all their woes. Since then, Micheál has continued as party leader and is half-way through his short-term Taioseach term.

But like the DUP, Fianna Fáil is a divided party. Fianna Fáil TD Jim O’Callaghan has publicly said that it’s unlikely Micheál will lead Fianna Fáil into the next election, which is another way of saying, “I quite fancy your job, Micheál.”  The Taoiseach, of course, says he has no intention of resigning. But the sound of knives sharpening will become louder at the end of this year, when Micheál steps down and hands the role of Taoiseach to Leo Varadkar.

And so he has been casting around for a big-ticket item to tie himself to. The Shared Island project looks like it’s withering on the vine, so in recent days Micheál has been hinting that the south (or ‘Ireland’ as he calls it) needs to take a second look at its traditional stance of neutrality. Events in Ukraine could well make that a very important matter.

And the good knight Jeffrey? He’s tied himself to the anti-Protocol campaign, and reminds people at every opportunity that he’ll simply not have it. But, a bit like Micheál trying to out-green Jim O’Callaghan, the good knight Jeffrey’s opposition to the Protocol is doomed, because he’ll never out-unionist Jim Allister. Allister thinks Donaldson is a waste of space, O’Callaghan thinks Martin is a waste of space.

But it’s unlikely that the TUV rumblings against the good knight Jeffrey will result in the DUP getting  a new leader, not in the short term anyway. Jeffrey is firmly in the driving seat and motoring at speed towards his day of destiny,  May 5, when elections in the North will be held.

Micheál Martin is probably a couple of years away from his day of destiny,  but even before that he could find his party prefers the pungent green of Jim O’Callaghan to the faint whiff of green from Micheál. If as expected Sinn Féin become the government after the next general election in the South, Micheál may find himself as a junior partner in government with Mary Lou McDonald. If that happens, don’t bet on Micheál’s political future, especially with O’Callaghan in the back or front benches  making eyes at Mary Lou.

Uneasy lies the head that wears the crown.