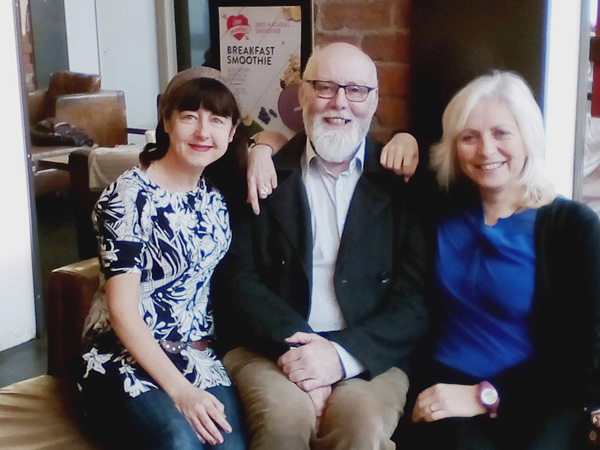 EXHIBITION: Lise McGreevy with Belfast producer Jim Johnston and composer Marie Therese Davis who are involved in the ‘Abandoned; Not Forgotten’ project

A NEWTOWNABBEY visual artist is to showcase a peace and reconciliation project which has already gained endorsement from the Stormont Assembly.

Lise McGreevy’s latest installation of her self-initiated project, entitled ‘Abandoned; Not Forgotten’, will launch at the Engine Room Gallery behind Belfast City Hall on May 4 from 6pm to 9pm.

The collection is Phase II of a three-part project on peace and reconciliation, which began last year with ‘Psychedelic, Hitchcock Belfast’.

Lise qualified as a photojournalist in 2000 before turning to art to report what was happening through pictures.

“Qualifying as a photojournalist in 2000, I have reported on many issues and stories linked to political adversity here in Northern Ireland over the years,” she explained.

“I therefore felt it important as an artist, with a strong documentary background and deep rooted interest in my ‘wee’ country, to research deeper into, and report pictorially on a time in our history where the north and south of our island were not divided by political, cultural and historical differences and borders.

“I am passionate about promoting both the arts and Northern Ireland and therefore all of my collections celebrate our country’s culture, history and heritage.

“With the centenary anniversary of the end of the First World War and also the 20th for The Good Friday Agreement to be celebrated in 2018, I decided I would like to develop the concept of peace further in phase II, by looking at its implications within a historical and cultural aspect of our island’s history.”

Lise’s idea for a second phase of art came after a visit to Donegal in November as she sought to represent both the north and south of Ireland.

“I took Donegal as my muse, reflecting that it represented both the north and south of Ireland – geographically in North Ireland, but under the jurisdiction of Ireland, taking language and culture as my points of historical unity.

“I decided to do first hand research in the county and went for six days in November spending four to five hours each day touring around, locating and photographing every derelict house I came across and also their surroundings to contexualise their abandonment.

“As I walked the narrow, windy country roads, one thing that struck me was the isolation our ancestors must have felt living in these humble abodes. The houses were so far apart and on foot it took me a long time to cover distances between them.

“The isolation I felt backed up the abandonment and lifelessness portrayed by these forgotten homes and the barren landscape that engulfed them. I knew then that I had chosen the right subject to portray the emotional, historical and cultural unity of our isle and ask the question, has it been forgotten by our society today?”

On Lisa’s eventual return to Belfast, she produced a body of work which was showcased to curators of the Engine Room Gallery and Artcetera Studios, which will host her two solo shows in 2017.

MLAs, councillors, the Lord Mayor and other VIPSs will be invited to the launch event which is due to take place in the Engine Room on Thursday, May 4.