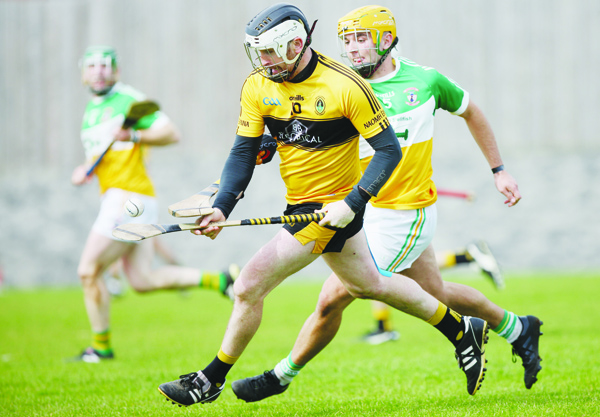 On a busy weekend of Antrim Championship action, Naomh Éanna's hurlers are vying to claim the Antrim Intermediate crown for the first time

A COUNTY final is a special occasion for any club, but given Saturday’s Antrim Junior Hurling Championship final between Gort na Móna and St Paul’s is a local derby, there is an added intrigue and sub-plot to proceedings (Hannahstown, Saturday, 1.45pm).

The Gorts joined their West Belfast neighbours in the decider thanks to their 5-15 to 3-8 win over Rasharkin under the floodlights at Ballymena last Wednesday having endured a difficult start to the game.

However, four goals in as many minutes swung the pendulum decisively in favour of the Turf Lodge men with Dessie McClean playing a starring role, finishing the game with 3-7.

Having defeated St Paul’s twice in the league already this year on their way to the Division Three title, many will consider the Gorts favourites to land a second Junior crown in three years, but manager Thomas McGilligan says they will be taking nothing for granted.

“I know St Paul’s guys very well and they are great fellas who know their hurling,” said the Dunloy native.

“They understand the game very well and will have done their homework.

While St Paul’s will enter the game as underdogs, they are most definitely live ones and will be planning to keep this game tight and break for home in the latter stages.

They were ambitious enough to see a path to Saturday’s final from the outset and believed they would be facing Gort na Móna when there.

Saturday’s final will be about who makes the most of their spells of dominance and both sides have marquee players who can make the difference.

“We’d be confident that if we turn up and play to the system we devise, then we won’t be far away,” said the St Paul’s boss.

“We are going to have to take our scores and there will be periods in the game where both are on top, so it’s about being clinical during those periods.

“I’ve no doubt it will be a close game even though Gort had the edge on us in the league games.

“We are hoping to still be in the game after 45 minutes then try to push on from there in the ‘championship rounds’ to get the result we are all looking for.”

Meanwhile, the Intermediate Hurling Championship final takes place on Saturday evening at Cushendall (throw-in 5pm) when Naomh Éanna will look to claim the title for the first time when they face Carey Faughs.

The senior decider is on Sunday afternoon in Ballycastle (3pm, live on TG4) when defending champions Cushendall put their title on the line against 2017 winners Dunloy.

There is also a football decider this weekend when Ardoyne take on St Patrick’s, Lisburn in the Junior final at Glenavy on Saturday (3pm).