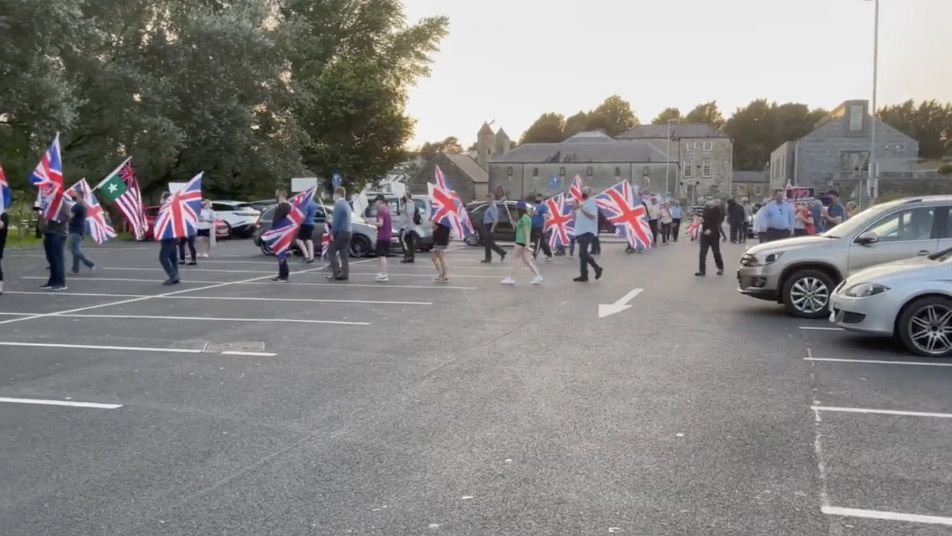 THE Jamie-Jimbo roadshow was in Enniskillen on Thursday night for the latest mass loyalist protest over the iniquitous NI Protocol©.

A car park had been booked for the Nolan Twins (if, indeed, it is possible to book a car park) and the Parades Commission had been notified that 500 protestors would be marching behind a loyalist band to the union jack-draped decorating table at which the honoured guest speakers would be seated. Next day the organisers put up a short clip of the flute band entering the empty car park, but of protestors there was no sign. Which was strange seeing as how public protests are designed to create filmic and photographic images to be used to advance whatever it is that’s being complained about.

Later, another, slightly longer clip emerged, again of the band, but this time with the protestors two abreast behind. It was not possible For Squinter to count exactly how many non-drummers and non-flautists there were, but it was possible to get a very close estimate. And the figure that Squinter came up with is between 42 and 46 marchers. Let’s even round it up and call it 50.

That’s fifty people who turned up on a sunny late summer evening to hear the poster boys of unionism give off about the greatest threat to the union since the last greatest threat to the union. How many got the bus there from Belfast and how many were local people answering the metaphorical call to arms is impossible to say, but whatever way you cut it up, it was the latest – and easily the most embarrassing – example of the disconnect between ordinary loyalists and what’s being roared over the social media megaphone by Messrs Allister and Bryson. And yet we keep being told that loyalism has never seen such raw anger...

What we know about loyalism is that it has historically got people out at times of political ferment, from the signing of the Ulster Covenant in 1912, to the Anglo-Irish Agreement of 1985 and the Great Flegger Siege of City Hall in 2012. But for all that we’re told that the Protocol is pushing loyal Ulster to the brink, while Jamie does his Blue Bin Edward Carson act, the vast bulk of loyalism is in the house watching Netflix.

What are we to make of this? Does it mean that loyalists like the Protocol? Clearly not, and it’s pretty certain that a decent majority would like to see it in a bin of any colour. But it does suggest very strongly that things are not as black and white as the self-appointed Protocol Panel would have us believe. For it’s possible to value your place in the union and still like your Nando’s butterfly chicken. Your eyes can fill with loyal tears when you watch the queen on Christmas Day and you can still like a strawberry milkshake with your Big Mac. You can don the sash your father wore and still feel uncomfortable when the boss of the Co-op says he has never seen food shortages like it.

In other words, it is possible that you take your loyalty with a pinch of reality; and it is a racing certainty that many unionists who see the Protocol as a threat to the constitutional status of the UK are at the same time experiencing doubt and confusion amidst the torrent of Brexit horror stories emerging daily in Britain. You don’t have to like the Protocol, but when you have eyes and a Tesco Clubcard you’d be mad not to wonder what your life would be like without it.

NO. There’s no truth in the claim that BBC bosses in Belfast have said Rangers fans in Glasgow on Sunday were singing the Beach Boys song The Sloop John B. And slap yourself on the back of the hand if you were silly enough to believe that bit of mischief-making. They actually said it was Surfin’ USA.

Footage released at the weekend appearing to show Rangers fans singing The Famine Song (“The famine is over, why don’t  you go home?” aimed at Irish-Catholic Celtic fans). Police Scotland say they expect to make arrests – the statement coming after the Scottish government hit out at the fans involved in the incident. The Scottish police themselves fielded significant criticism for escorting the fans singing the song through the streets of Glasgow without attempting to intervene.


This case will take its course, but we’ve seen enough of Rangers fans in action recently to note that a worrying number of them value their anti-Irishness over their love of the Teddy Bears.

Strange, really. They’ve been living in the shadow of their city rivals for years, but in the past two years have finally managed to turn things around, beating Celtic on a regular basis (last Sunday included) and taking the Scottish Premiership from them. They’ve performed solidly in Europe and Ibrox has been filled to the gills as the fans flood back after the Covid break to bask in their new-found success.

So you’d think the fans would want to sing about happy days, glorious wins, in-form players, the manager’s achievements. Nope, they’re regularly singing about an event which claimed the lives of over a million Irish and telling the Scottish descendants of people who fled the famine to get out of the country.

What’s particularly, ah, interesting about all of this is that the Rangers team is an exemplar of diversity. Players of all colours, players from all over the world, Protestants, Catholics, Muslims. Indeed, when Rangers midfielder Glen Kamara was racially abused during a game in the Czech Republic back in April, the players and the club sprang immediately to support him and back in Glasgow he thanked the team from the green side of the city for the solidarity they had shown with him. Rangers-minded social media accounts were alive with indignation and supporters – not especially renowned down through the years for having progressive views on race and colour – angrily demanded that Kamara’s abuser be given the punishment he deserved. Sadly, that indignation does not extend to their terrace colleagues singing anti-Irish and anti-Catholic songs.

Maybe it’s too early. For all their recent dominance recently, Rangers have scooped only one top title. Maybe if the club gets another few trophies under its belt things will change.

Unfortunately, Rangers’ early Champions League has devastated the club’s financial recovery plan and they’ve had to sell arguably their best and most popular player to offset the damage. And if the team starts losing and the fans’ mood turns dark again, you just don’t want to think about what they might start singing.

WHY don’t men do the Slush? There’s a question that came to mind when the song Knock Three Times by Dawn came on the radio this week. It’s a classic medium pace Slush song, of course, and it immediately evoked memories for Squinter of weddings or parties when large groups of women would take to the floor for a bit of regimented heel-tapping, foot-kicking and thigh-slapping.

Squinter has probably seen a man doing the Slush before, but if he has he can’t remember it. All he can remember are battalions of women lining up and doing their thing as the men looked on from the sidelines clutching pints of Guinness and Harp.

Not Squinter’s favourite dance, he has to say. It all seems a bit mechanical and stilted, something that’s perhaps reflected in the fact that the dancers never look particularly happy as they go about their business – you might even say they look pretty serious.

It might be considered a bit of a relic from the past, but at a do in the PD not long before the pandemic took hold at least half of the women crowding the dance floor for the Slush were 30 or under, so it looks as if the dance is going to be around for a wee while yet.

Other contenders for the title of Slush Classic that Squinter has fielded are Mississippi by Pussycat; Ten Guitars by Engelbert Humperdinck; My First, My Last, My Everything by Barry White; (Is This the Way to) Amarillo by Tony Christie;  Dance the Night Away by the Mavericks.

But it seems that the song most associated with the Slush is Beautiful Sunday by Daniel Boone. Squinter’s not sure if the song has been a Slush staple since it was released in 1972, or whether it gained popularity after being featured in a hilarious episode of the BBC Scotland sitcom Still Game. The dancing is led by two men, which might suggest that the Scots have a rather more enlightened view of the Slush than we do. Watch the clip on YouTube and you’ll find that the Scots call the dance the Slosh, although what its connection is with liquid is anybody’s guess.


AND after the great Slush debate, the great Weetabix debate, at the centre of which lie two burning questions:

1. Do you have them with hot or cold milk?
2. Do you eat them with or without sugar?

Squinter’s a cold milk and sugar man, but opinions are starkly divided on the subject.  Readers of a sensitive disposition are advised to look away now...

There are, believe it or not, many people out there who believe Weetabix are designed to be turned into mush. What they do is they pour hot milk (usually microwaved) over them and mix it up until it resembles something you might produce after a feed of pints and a kebab. If Weetabix were designed to be eaten like baby food they would put the stuff in wee glass jars. But they aren’t and they don’t. Weetabix are made crispy and they’re meant to be eaten crispy.

Which brings us to the sugar part, which also splits the breakfast cereal community. The truth about Weetabix is that, like most things that are very good for you and have lots of fibre, they don’t taste of very much. They taste of wheat, in fact, which only tastes of wheat, which tastes mostly like communion wafer. So Weetabix need jazzed up a bit. Sugar’s the most popular choice, but some people who shy away from sugar go for honey or sliced banana, which is fair enough, Squinter supposes. Long as they don’t heat the banana.