Luncthime at Ashers – praise the Lord and pass the firecracker sub 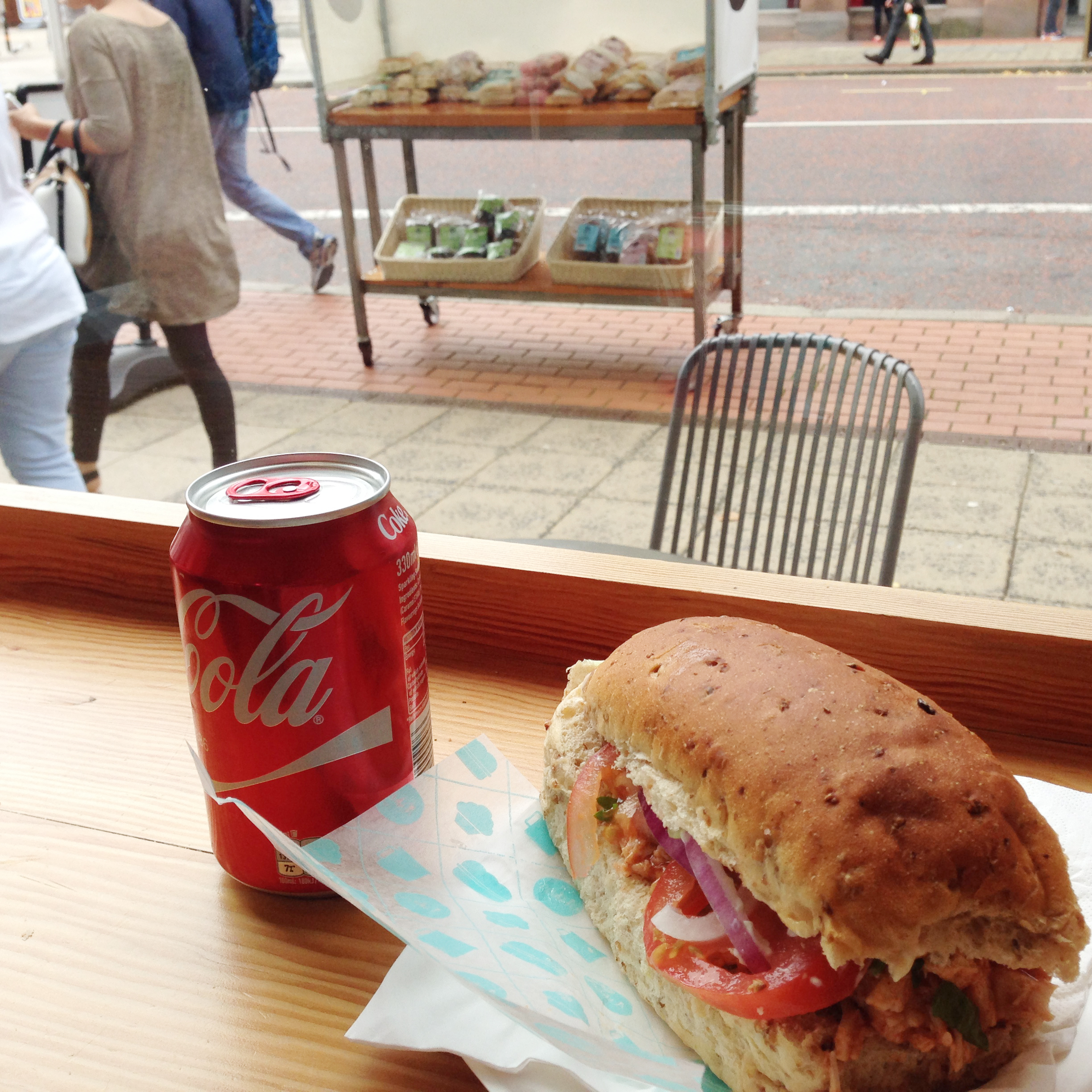 £3.50 for this lot is very good value in a prime city centre location

LUNCHTIME on Thursday and Squinter finds himself in town on a mission so pointless and banal that its details need not detain us here. Plenty of options for a tightener, of course, with countless establishments offering quick and convenient fare for the city’s workers, who are out in their numbers on a balmy late summer day.

As he exits CastleCourt and makes his way towards City Hall, he passes a sandwich shop that seems strangely familiar. Closer examination reveals that it is in fact a branch of Ashers, the firm that gained fame – or notoriety, depending on how you spend your Sundays, on the back of what’s become known as the ‘gay cake’ case.

As it happened, Squinter was firmly on the side of the customer, the guy who had his order refused because Ashers’ owners take the Bible more seriously than business. Naively, Squinter had assumed that the majority of people in the democratic socialist republic of West Belfast shared his view, but in fact Squinter was extremely surprised as the case filled the teatime bulletins every night to find that large numbers of his friends and neighbours and colleagues were four-square behind Ashers and its refusal to bake the cake.

Ashers lost, of course, and an appeal is in the offing, and since the court case ended the company has faded from the public consciousness. But when Squinter saw the sign he was reminded of the extraordinary way in which a seemingly innocuous incident had grabbed the headlines both at home and abroad. What’s it like to eat in a Christian bakery?, he wondered. And so, to slake his curiosity, and to get 400 words for this column, he decided to find out.

First thing he noticed as he stood in the queue is that the customers in the line and seated at the window weren’t, as Squinter had somehow imagined, like a Gospel hall congregation. The women weren’t wearing hats from the 1950s and the men weren’t clutching Bibles and closing their eyes. Neither, though, was the clientele as raucously diverse as that you might find in McDonald’s, say, or Subway. All age groups were represented in the half-hour or so that Squinter spent in the shop, but they had in common an almost indefinable conservatism in the way they dressed and comported themselves.

The first thing to be said is that for a prime spot in Royal Avenue – and much has been spoken and written in recent weeks about the ruinous level of rates in Belfast city centre – the food is great value. Subs, for example – for that’s what the majority of lunchtime punters were ordering – are mostly round about the £2.50/£2.70 mark. Squinter eyed what was on offer behind the glass and when his turn came he asked the middle-aged woman who served him whether the ‘firecracker chicken’ sub was as fiery as it sounded. With a smile she asked Squinter if he’d like to try a taster and when he said he would she went off and came back with a little bit of sauce on a plastic spoon. It was pleasantly piquant when it went in and so Squinter ordered one, but by the time it had been put on a paper plate for him some serious heat was starting to develop at the back of his throat. Squinter paid up – £3.50 or so for the sub and a can of Coke; and, no, he wasn’t asked to renounce the devil and all his works before the woman took his money.

Squinter took a wooden stool and tucked in (to the sub, not the stool). He didn’t say grace, but then neither did any of the other diners around him. Very fresh and tasty the food was too, but as he looked out the large plate-glass window he remembered that people could see him as well as he could see them, and he began to worry about how he’d explain this choice of eatery to any right-on Wolfie Smith-type pals who might wander past. In the event his concerns were unfounded and he enjoyed a perfectly enjoyable lunch in very convivial surroundings watching the city go by. The firecracker chicken was hot alright, but Squinter’s palate quickly adapted and he left Ashers with a pleasant tingle in his mouth to remind him of his good-living lunch.

As he left the nice lady who served him called out. “How was your firecracker chicken?” she asked as Squinter stopped at the door and turned. “I’ll not be able to answer that until tomorrow morning,” Squinter replied. Bit rude, no doubt about it, but she laughed and so did a few of her colleagues, praise be.