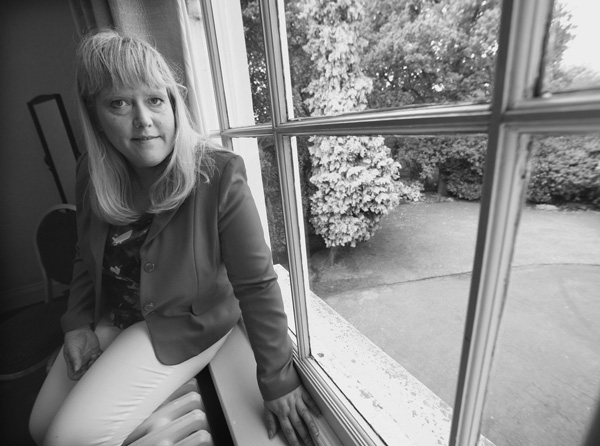 AN art exhibition which aims to raise awareness for the brain tumour charities Brainwaves NI and Brain Tumour Research UK is currently under way at Malone House.

The ‘All That Remains’ exhibition will be on display at the Higgins Gallery until June 3 and features a range of artwork from the Studio 23 art collective.

Having undergone four surgeries for brain tumours in the past, local artist and curator of the exhibition, Mo McDevitt, became increasingly aware of the need for research and funding.

“My first brain tumour surgery was in 1989 and there was no MRI back then, so I had to have my skull opened,” she explained.

“Two years later I had the same again, but in 1996 I had to have radiotherapy and by that time MRI had arrived and that was a huge leap forward. It just shows how much of a difference research and new technology can make. I had my last surgery in 2010 and I’m very fortunate to have come out the other end, but some people aren’t so fortunate.

“There are major changes that happen in your personality your character and your body. The prejudices you meet from some people is unbelievable and it’s just a lack of understanding.

“I’ve had this minor collective show to raise awareness of the need for brain tumour research. It is one of the biggest killers, second only to childhood leukaemia. We have many children who are born with tumours and we need to look into that as well a whole range of other issues,” added Mo.

Despite the horrific and often fatal effects of brain tumours, the relevant research charities are still some of the most underfunded medical charities in the UK. Brainwaves NI receives no statutory funding or grants, but its members have helped raised over £150,000 for vital research.

41-year-old Jan Taggart, who has been a member of the charity for a number of years, explained how the charity helped her through her own illness.

“As well as the research that is funded through the charity, it’s also a great support network for people who have suffered brain tumours,” she said.

“I was diagnosed when I was 29 with a brain tumour and bleed on the brain stem. I was up for open surgery in the Royal Victoria Hospital but it was cancelled because I wasn’t considered as having priority needs. I was supposed to have the operation on a number of different occasions but it was cancelled several times because there were only 13 intensive care beds in the Royal at the time.

“When I was starting to get slightly better I was discharged and I then went over to Sheffield for specialised gamma knife stereotactic radio surgery. It was a very sad, anxious and horrible time.

“They shaved my head for the open surgery. I was paralysed down my left side, I was on steroid IV in my hand and I also couldn’t eat. Eventually I came round because of physio, which helped me to walk around. Luckily it has all passed and the care I received in Sheffield was amazing.

“When I came back I was recovering really well and I heard about Brainwaves charity. I became involved in various charity events and monthly meetings to help the charity. The support is unbelievable and there are so many good people involved.”

Jan has been actively involved in promoting the charity ever since she became a member. Also a keen artist, she hopes to host her own exhibition in the future to help raise the profile of the charity and to push for government funding.

“I hope that through my own artwork and other events organised by Brainwaves that we can make people more aware of the issues and hopefully get more funding,” she said.

“I started getting interested in art again because I got involved in art therapy as part of my recovery. I find it very therapeutic for my emotional and physical wellbeing. Now I hope that my art can help some other people too – not only people who have brain tumours, but also their families.”