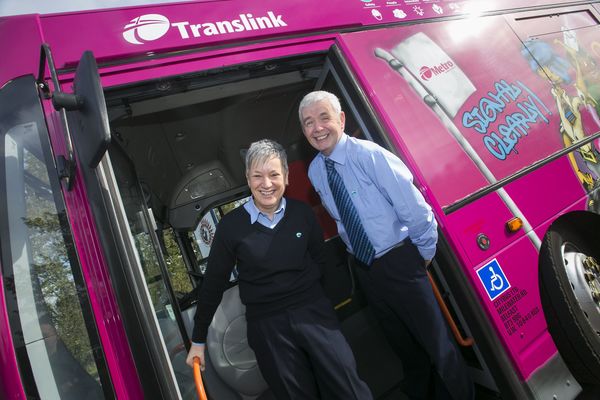 ALL ABOARD: Susan O’Neill and Kevin Wallace have been educating children about the dangers of anti-social behaviour on public transport

A familiar and invaluable community resource, Translink’s Safety Bus is preparing to raise a toast as it celebrates its 18th year.

The brainchild of a number of drivers back in 2002 when it was launched, now Susan O’Neill and Kevin Wallace, deliver the free initiative. To date over 500,000 pupils have been educated by the team as they continue to promote their message of safe transport, the need to protect the service, including the wider social and environmental benefits alongside the detrimental effects of anti-social behaviour to the driver and the service.

“The Safety Bus started up in 2002 as a proactive way to engage with the community to tackle anti-social behaviour and in particular stop stone throwing,” explained Susan.

“At the time, broken windows were a regular occurrence and we needed to take action to build confidence in the local bus service and protect our drivers.

“The initiative proved to be a big success. Within a year of the Safety Bus being on the road, engaging with the West Belfast community, showing that these buses belong to young people and their families who use the service, stone throwing reduced by a massive over 60 per cent. The instances continued to drop each year and we now have minimal incidents of this kind of anti-social behaviour which is a real testament to the hard work of the team and the wider community representatives in the area.”

Susan said that when Translink first started the project it was difficult to break down barriers.

“I suppose there was a sense of ‘them and us’ as we wore a uniform, but once we got talking to the right people they started to trust us, and trust that we would work to deliver what we set out to do. I think that is why the project works and continues to work to this day. It was described one time as an ‘octopus’, with so many different tentacles coming out, it was educating primary and secondary school pupils and their parents and grandparents.”

Kevin agrees. “I think the Safety Bus works to help children recognise the human aspect of our work,” he said. “The purpose of the initiative is to show how a bus driver is not just a uniform, but a person who is part of the community.”

Kevin added” “Over the years we have seen the safety bus messages evolve. More and more young people care about the environment and understand how public transport can make a huge difference in tackling air quality and climate change – key for future health and wellbeing. It is great to see young people championing these important issues. The pandemic has certainly put a spotlight on this again and public transport is vital as we work to recover in a safe and sustainable way.”

Susan and Kevin spoke of how much they are used to being out and about in the community and that with Covid-19 restrictions they are trying to get used to “being in the office more”.

“We’ve been working hard to put the correct safety measures in place on the Safety Bus so we are ready and waiting for when the schools want us in September,” said Susan.

“We are here so that every single Year 8 child in West Belfast gets educated.”

The Safety Bus team also initiated, in collaboration with Colin Neighbourhood Partnership (CNP), their Community Safety Art project, encouraging children to design a poster to promote safety and discourage anti-social behaviour, with the winning art displayed inside and outside buses in the area.

“We think it’s a good idea for the kids to get involved,” said Susan. “There are normally five schools involved, they all get a trip to Crawfordsburn and we have a BBQ for them. We roll up our sleeves and it’s a way of thanking them for being part of the project. It’s a massive occasion and they absolutely adore it.”

Kevin said his job “is very humbling” to do.

“We were down in Newcastle last week and two kids walked up and said, ‘you are our safety bus driver’, they might not remember your name, but they remember you being at the school. We seem to make a lasting impact on them which is great for us.”

As part of Translink’s Let’s Go Safely Together Campaign, Translink, with the support of community groups and some local famous faces, are asking young people not to travel in large groups on public transport, to wear a face-covering and keep social distancing particularly at bus and train stops and on-board public transport. The call is simple – Play Your Part and Don’t Be A Melter.