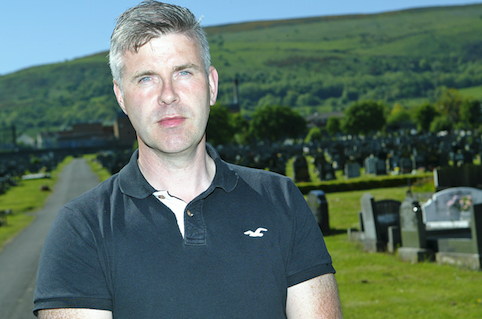 AN all-party Cemeteries and Crematorium Development working group that was formed a year ago to tackle the ongoing issues around burial costs and cemetery maintenance and development, say they feel that Belfast graveyards and cemeteries need a radical overhaul to keep up with demand.
The Council group, who meet on a monthly basis have been tasked with finding solutions and coming up with ideas for Belfast’s cemeteries.
Councillor Stevie Corr is the Sinn Féin representative on the working group.
“The idea of a new cemetery for West and North Belfast has been discussed for well over a decade now and has yet to come into fruition,” he said.
“The City Cemetery for all intents and purposes is full, Milltown has limited availability as well, St Joseph’s cemetery in Hannahstown is only available to parishioners. New graves are only available in Blaris cemetery when someone dies, the days of pre-planning your funeral or purchasing multiple graves are gone, we are almost at crisis point with our cemeteries.”
Last year Lisburn and Castlereagh Council was tendered for a new cemetery, however the tender was unsuccessful.
Cllr Corr said: “Because of boundary changes people in the Colin area are no longer Lisburn Council meaning they will have to pay more to be buried in Blaris because that cemetery/ crematorium is no longer in their jurisdiction.
“This is reaching crisis point, we need to have a radical approach, review and rethink around the issue of burials, cremations and cemetery spaces. We can’t wait until the day somebody is refused burial because there is no space.”
With that in mind Belfast City Council have come up with the new cemeteries working group to look at these issues and to also come up with ideas around the development of our cemeteries.
Cllr Corr said: “I am the party representative on the group and we are coming up with some excellent plans. For example, a new multi-million pound upgrade will be going into Roselawn crematorium.
“We still need a new cemetery for North and West Belfast, it’s a very sensitive subject.
“Our cemeteries are also in a position where they can become historical and tourist attractions. Look at Tom Hartley’s cemetery tours, they tell the tale of our city, from rich tombs and headstones to poor grounds where thousands of our poor are buried.
“Glasnevin Cemetery in Dublin is one of the main tourist attractions on the island of Ireland, it went from being a crime hotspot to being a place of beauty and interest, because it tells the tale of the formative years around the formation of the Irish Free State – our cemeteries are no different.
“There have been books written about the City Cemetery and Milltown Cemetery.”
Cllr Corr continued: “Clifton Street Graveyard contains the graves of some historically significant families, including the Dunvilles, the Sinclairs and Henry Joy McCracken, one of the leading United Irishmen. It was closed to public access approximately 25 years ago due to anti-social behavior. This has now decreased and the local area of Henry Place has been re-generated and a new business hub has been formed. The graveyard remains locked due to concern regarding the safety of some of the monuments. There are currently regular requests for access from tourists and visitors with a genealogical or historical interest in the graveyard.
“Our social, political, economic and religious history are in our cemeteries and we need to have them as places we can use for education.
“Take for example the City Cemetery heritage project, we want to bring tourists, academics and school children in as well as the local community. Our cemeteries are at their safest when people are in them, Tom Hartley’s tours have proved that.
“The purpose of this working group is to give an extra edge and focus while giving the issues of graves, cemeteries and monuments the attention they deserve.”